Caring for My Aging Mother 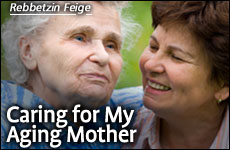 Charity does, indeed, begin at home. And it isn't easy.

My 80-year-old mother recently had a stroke and being an only child, I've had to travel cross-country to care for her in her home. She and I have had quite a few issues about this and her willingness to continue to care for herself. I have two close friends in similar situations and given the state of modern medical care along with the economy, this is a situation many must face as caregiver and recipient.

I would love to learn your thoughts.

The phenomenon of both aging and the caring of the elderly in our culture is a very challenging one. In the past, in a Jewish world governed by the traditions of Torah, the elderly were our most venerated and prized population. When seeking wisdom and guidance, the verse in the Torah advises: "Ask your fathers and they will tell you and your elders, and they will inform you." Those advanced in years were respected for their life's experience. They were considered a most valued resource, held in high esteem and cared for accordingly.

Today, we live in a society that worships youth. The greatest compliment you could give someone is "you don't look your age." The wrinkled face and weathered body that unforgivingly reflects years of enduring life's trials and tribulations has ceased to be a badge of honor in our time. Advanced age marks us as increasingly superfluous.

Understandably, in this context, an elderly parent will, perforce, feel very vulnerable. Their perception will be one of having outlived their usefulness. Not only are they not productive or contributing members of a society that has declared them past their prime, but now they have to confront the terrible possibility of becoming a burden to their children.

There is always lurking in the background the terror of aging, of being abandoned, of being alone and helpless.

Recognizing this sociological context can help the reader be more sensitive in his conversations and interactions with his elderly mother. Aside from his mother's individual personality and issues, there is always lurking in the background the terror of aging, of being abandoned, of being alone and helpless.

Dear reader, ideally speaking, it would be best for your mother to be close to you so that you can check up on her more frequently. If possible, and if she is willing, relocating her to an independent or assisted living facility in closer proximity to yourself might be more practical than your current situation that necessitates constant travel on your part. If that's not possible, a last resort would be delegating responsibility and making accommodations for her care in your absence along with your periodic visits.

Life is always about very delicate balances. Responsibilities have to be sorted out and priorities established. Perhaps an objective party who has good traditional values and understands your personal circumstances might be enlisted to help you decide what's reasonable and doable in your situation. Elderly parents can be very demanding, stubborn and, at times, unreasonable. Acquiescence to their needs on one hand and the cost it would exact -- impact on job, wife, children -- on the other would be the relevant issues to address. How much is enough? How much is too much? You want your decisions to be driven not by guilt feelings but by what is right and moral.

Alas, even the greatest technological era of all times has not conferred upon us the wherewithal to be in two places at once. Choices, and at times painful ones, have to be made. Consulting a rabbinic authority who is well versed in these issues can be extremely helpful. He would help you determine a hierarchy of responsibilities and how they stack up in the given situation.

I lived a thousand miles from my parents. I often found myself part of the sandwich generation -- elderly parents on one end, husband, youngsters and eventually married children in the middle and at the other end of the spectrum. Conflicted and frustrated in my desire to please everyone, and knowing it was impossible, I consulted a Torah authority. In the instance where my daughter came home to have her first baby and my father needed me to come to Florida and break the news of her brother's death to my mother, the ruling was that honoring my father's wishes took precedence. The fact that I didn't operate by 'the seat of my pants', but rather deferred to a wisdom beyond my own, gave me clarity, requisite peace of mind and relief from the second-guessing game I would have tortured myself with.

Remember that regardless of the logistical arrangements that you can reasonably make for your mother -- ones that will in all likelihood not be totally pleasing to your needs or hers, there is the overriding issue of attitude. The Talmud presents two contrasting situations. The first is one of a son who puts his elderly father to arduous labor at a mill and nevertheless was judged to be in compliance with the honor one must accord a parent. The second son served his parent culinary delicacies, but was still considered in violation of his responsibilities to his parent.

The Talmud explains that the circumstances of the former was that it was a time of war and the job at the mill spared his father induction into the army and thus was to his father's benefit. In the latter case, however, while to all appearances it seemed that serving his father delicious food was an expression of honor and love, the affect and attitude of the son toward his parent was one of resentment and impatience, and as such negated any benefit his father would have received.

In Yiddish the expression is, 'like the good cow who gives its milk and then knocks it over with a kick of the leg.' The presenting behavior needs to be accompanied by a kindly rapport if it is to meet the Torah standard of honoring one's parent. Given the often intractable and sometimes obnoxious stance of an elderly parent, where they dig in their heels with unreasonable demands, maintaining one's healthy equilibrium can be a daunting challenge. But again, we need to be mindful of the fact that aging, with its concomitant loss of health and faculties, is unsettling and at times excruciatingly painful. Under these circumstances, offspring should be able to get that 'it's not about them.' They should not take things personally. It's about extending charity, both in judgment and behavior, to a person, albeit a parent who is in great emotional turmoil and need.

Charity does, indeed, begin at home. And it isn't easy. Parents know better than anyone else what buttons to push to drive us over the edge. The 'it's not about me' mantra can be enormously helpful.

No one can be told too many times that they are loved. That is certainly the case for parents in the sunset years of their life.

Dear reader, in light of the above, effective communication would take the form of constant affirmations of love to your mother. Tell her consistently how much you care about her and how much you appreciate everything she has done for you. Recall and revisit with her memories of the past, moments of tenderness, when she was there for you. Share whenever possible, no matter how difficult or tense the situation, your feelings of gratitude for all she has given you in your life. Affirm and validate.

It is said that no one can be told too many times that they are loved. That is certainly the case for parents in the sunset years of their life. Additionally, realize that no matter how difficult and 'burdensome' parents may become, they are exclusively (with the exception of pathological relationships) the only source of unconditional love for us. In a sense, it is payback time. Be assured that in retrospect you will be comforted and proud of the energy and time expended on a parent's behalf. Nobody and nothing will ever be able to take that away from you. The knowledge of having, to the best of our ability, appropriately honored our parents accompanies and warms us forever.

Do the best you can and may God bless you. 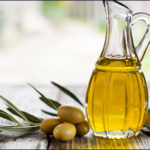