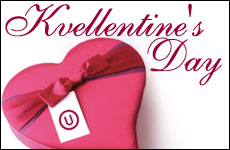 Many American men will have barely recovered from the exertion of watching the Super Bowl when they are forced into preparing for an even more strenuous event: Valentine's Day. As men jam floral shops across the country, they will mutter curses about the implied extortion of February 14. Let's be honest: this is an artificial holiday that essentially says: buy me jewelry, candy and flowers to show me you love me -- or else!

I ask you: Is this any way to run a romance?

When I was single, I was too naïve to realize that the men I saw carting candies and flowers through the streets on Valentine's Day were not displaying any spontaneous outpouring of love for the women in their lives. Not a chance! They were acting on a primal survival instinct warning them that if they dared appear at home without so much as a dozen roses (even if purchased from the gas station) they'd be facing several nights of solitary confinement on the couch.

Fortunately, I discovered that the Jewish calendar was so chock-a-block with holidays that I no longer had time for a holiday invented by a priest. Usually around mid-February, I'm busy celebrating Tu B'Shvat, the birthday of the trees, and planning my Purim costume and party. I must say, it all came as a relief. No longer would old Saint Valentine wield his praline-filled anxiety over me each and every year.

I also wanted to make sure that my own kids would be exempt from the panic that I endured as a little girl in public school. Would I be the lucky recipient of those popular tiny heart-shaped candies doled out by classmates, stamped with "Be Mine" or "Marry Me"? Or would I suffer the indignity of being cast aside for another girl? How early must this social pressure begin? I say, first grade is too early!

And so, although my kids are more tuned in to Tu B'Shvat and Purim than Valentine's Day, it's hard to ignore it completely. After all, the supermarkets are swathed in pink boxes of chocolates, daring you to pass them by. I thought, why not help Jewish kids feel better about the whole thing by changing the holiday's name to "Kvellentine's Day" – a day when we could send endearing, authentic Jewish sentiments to one and all? This would require some logistical changes, however. For one thing, we'd need much larger sweets for all the Kvellentine's Day news that's fit to print. This is not only because Jews typically take longer to get to the point, but also because we'd need room for the all-important kosher symbol somewhere at the bottom of the treat. This would mean an early production run of hamentaschen, as well as an emergency production runs of blintzes and knishes, which should be large enough to contain most of the heartfelt emotions.

You Stole My Heart, You Gonif

These charming messages could include:

What a Shayna Punim!
Eat This in the Best of Health, but Not Too Many – You've Got High Blood Sugar
You Should Live and Be Well, And Grow Up To Find a Cure for Diabetes
You Meshuggeneh Maydeleh – Let Me Light Your Menorah!
Be My Balabuste!
You Stole My Heart, You Gonif
Be My Mentsh, Boychik!

And, for those who have suffered in love:

May This Lay in Your Kishkes Like a Stone
You Should Make a Fortune, Then Get Audited by the IRS
If You Weren't Such a Shmendrik, You Could Have Been My Bashert
May the Only Thing Anyone Ever Writes You Be a Prescription.
Let Your BMW Be Repossessed, You Cheap Shnook

I floated my idea about Kvellentine's Day with a school teacher, who thought it would go over about as well as a too-heavy knish. Other minority groups would undoubtedly demand their own variations of Valentine's Day, the teacher reminded me. What would we put on the candies for the Moslem kids? "I Love Your Eyes. Too Bad They're All I'll Ever See," and "Don't Steal My Heart, Habibi, or the Authorities Will Cut Off Your Hand"? What would we print on the candies for the Hindus? "When I First Caste My Eyes Upon You, I Wondered If You Had a Dowry" or "Meet Me By the River After the Monsoon Austerity Ritual"?

I soon realized that my idea, which I first thought had the seeds of brilliance, was in reality one of the worst marketing concepts of all time. Still, there is one tradition of February 14 that everyone can embrace wholeheartedly. Naturally, I am talking about the eating of chocolate – the richer, the darker, the better. After all, it's common knowledge that dark chocolate contains phytochemicals -- a medical word that has so many syllables that it has to refer to something that will either kill you, or is very, very, good for you. And since everyone in the world has eaten at dark chocolate at one time or another, we know it has to be good for you, otherwise, there'd be no one left in the entire world to worry about global warming.

Frankly, there's only one word I need to see on candy or chocolate on February 14 or any other day, and that word is Godiva. Note the root word of "Godiva" is "God," obviously because eating it is a heavenly experience. So go ahead, ess, ess, mine kind!