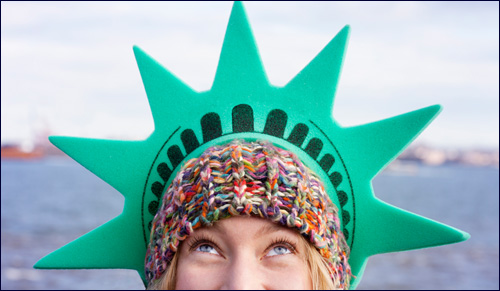 To New Yorkers, anyone from outside the Tri-State area is an “Out of Towner.” And we find your manners adorably considerate.

Of course, not all Jews who live in the Tri-State area actually grew up in it. Many hail from small (or at least smaller) towns across this great land and beyond. These immigrants to the Tri-State Area are affectionately known as Out-of-Towners ("OT"), a term which the Merriam-Webster dictionary defines simply as "a visitor to a town or city from another place."

In the New York area, there is something special about OT's who bravely journey to the concrete jungle in hopes of taking a bite out of the "Big Apple" and a big bagel. Some OT's who move to the New York area share certain unmistakable traits that actually scream "I'm an OT!" So, the question is: why do OT's behave the way they do?

The fascinating aspect of OT’s is that many exude a level of friendliness, kindness and sincerity that often is missing in the daily rat race of big city life. That does not mean that all OT’s are good and all locals are bad. Such generalizations would be completely unfair and it can be hurtful to paint all OT's with a broad brush, especially one with abrasive bristles. (Of course, other forms of painting also can be problematic, especially if you figuratively and literally paint the town red or paint yourself into a corner.)

With that said, let's talk about the particular behavior of some, but not all, OT's.

Many OT's like to hold doors open for others, which is adorably considerate. Some OT's will continue holding the door open until everyone within three square miles has passed through. A few will even risk being late for their own appointments, including job interviews, family reunions and life-saving surgery, just to hold the door open for others.

Many OT's like to make eye contact with the person to whom they're speaking, instead of constantly surveying the room for a better, more socially advantageous conversation. Some OT's will ask thoughtful follow-up questions because, unbelievably, they actually listen to what others have to say. A few OT's will even acknowledge your presence the next time they see you, as opposed to purposely acting aloof.

Many OT's speak with pleasant OT accents filled with small-town charm, wholesome naiveté and refreshing optimism. Unfortunately, it is an accent that sometimes screams "I'm an OT so feel free to take advantage of my kindness" or "The people in my hometown can't stand me, which is why I moved here. So, do you want to be my friend?"

I know what you're thinking. Why would some OT's behave this way? What's in it for them? Well, that's the craziest part. With many OT's, there are no ulterior motives, no secret strategies and no strings attached. OT's are not jockeying for position, angling for advantage or maneuvering for posture. In a word, OT's simply are . . . nice. Just imagine if everyone on earth shared this lovely OT disposition. As Sam Cooke sang in his 1960 hit: "What a wonderful world this would be."

Bottom-line: It is better to be out-of-town than to be out of time, touch, control or luck.

Go Ahead, Make My Boycott

Jewpid
The Promise Of The Land
Which Chat Are You On?: Parshas Behar/Lag Ba’Omer
Do You Like Slow-Cooked Food? Thank the Jews
Comments
MOST POPULAR IN Funny Stuff
Our privacy policy