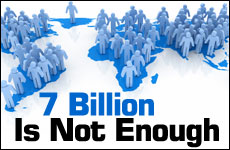 World population may have hit seven billion people, but here’s why we need more.

I may be a rabbi who lives and works in the heart of New York City -- in fact, I was just voted one of Gotham’s “hippest” -- but believe it or not, I occasionally catch a glimpse of an endangered species.

The endangered species I am talking about are of course young married couples.

They seem to hibernate all year, coming to the synagogue only on the High Holidays. That’s okay. I’m still thrilled to meet them.

This year, I got an interesting reaction after I said something that pretty much guarantees I won’t see these couples again for another year:

The wife blushed. The husband cringed. One of them blurted out their well-rehearsed response:

“Rabbi, we’d love to have kids. Someday. But right now, we’re not ready.”

That scenario plays itself out all over the world, every day. There’s an entire generation of Jewish grandmothers-in-waiting, praying impatiently for their own little bundle of joy (or two or three) to kvell over. But their daughters and sons aren’t cooperating. According to a 2002 study by the Jewish Agency, "the number of Jews in the world is declining at an average of 50,000 per year."

And this isn’t just a Jewish problem, either. Throughout the Western world, men and women in their prime reproductive years are doing everything but reproducing.

If you’ve been following the news of late, you may be questioning my wisdom, or sanity. It’s being reported that on Sunday night, the Philippines welcomed the world’s seven billionth baby, Danica May Camacho. In fact, despite being officially awarded the title by the United Nations, other countries are also claiming their newly-born babies are the seventh billion newborn on the planet. Still, the UN even had flown in the world’s six billionth baby, Lorrize Mae Guevarra (now 12 years old) to be there to wish a mazel tov.

As the result of this milestone, we’ve been hearing a lot this week about the “population boom.” However, if you crunch the numbers, a slightly different picture emerges: that “population boom” is more like a “health boom.” Medical advances are improving longevity, which is what is really driving up the world’s population numbers.

In reality, the problem isn’t overpopulation, but sub-replacement fertility and aging populations that will ultimately lead to massive population declines.

In places like Japan and Western Europe, low fertility has increased the incidence of voluntary childlessness, which in turn will have a far reaching impact on economic and social policy. Nations like Greece are already struggling to support their graying citizens (a message that few in that country seem willing to hear.)

China’s extreme sub-replacement fertility rate is creating a hitherto unknown family structure: children with no siblings. That is: family trees with no branches.

The U.S. is clinging to a healthy replenishment rate just of above 2.1 children, but only due to high immigration rates, which are now petering off, given the economic downturn.

As a rabbi, I can’t help but recall that Bible’s first instruction to humankind is, “Be fruitful and multiply. Fill the land and subdue it.” (Gen. 1:28). Note that the emphasis is not just on having a family, but a large one.

Some might ask: why was it necessary to command people to do something that not only guarantees the continued survival of the human race, but which comes so naturally? I’m beginning to think that the long ago command “to be fruitful and multiply” was actually meant for us modern people, thousands of years in the future – a kind of message in a (baby) bottle that would wash ashore in our post-modern, post-parenting era. Whether or not we will heed that message remains to be seen.

Jewish Advice for Being at Home

Are Jewish Stereotypes Funny?
The Blue Beyond
Great Place to Live
Is Eating Supposed To Be Spiritual?
Comments
MOST POPULAR IN Jewlarious
Our privacy policy