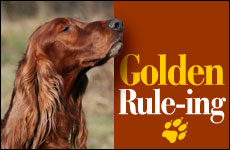 The Bible teaches us to love our neighbors as ourselves. But what if your neighbor is a dog?

I live on a pastoral block of old private homes in the middle of a major city and became accidentally integral by inheriting the position of Block Captain when my next door neighbor the former Captain retired by dying. As Captain, I update the emergency contact and email lists, containing descriptions of cars, kids, and nomadic newspapers, trashcans and pets, and announce births and other local phenomena. But as I am a low sodium, salt o' the earth sort of nice Jewish girl who lives alone and craves community, I also use my new position to promote a healthfully hemishe, "Do unto your neighbors as you would have them do unto you," tradition of exemplary behavior in the hood, going out of my way to be considerate of others.

My street is tree-lined, and thus dog-walker lined, as well. Loving dogs, I do a lot of petting on my strolls. I recently got chummy with the new next door neighbor, via her big "Jewish/Irish" setter, Schmulka, named for her grandfather, who was a big red-headed setter, too, apparently. My motives weren't entirely selfless. After you talk to a dog for awhile, its human senses you are friendly, and it begins to take care that the dog does not do unto your lawn what you would not do unto hers, with or without dog.

So one day, Sharon bemoaned in her baby talk voice of a sudden out of town trip that would leave her setter unsettled. "Poor little Schmulka he will be soooo lonely in a kennel!"

I volunteered to dog sit for a few days. Hey, I LOVE dogs, and menschy Schmulka always makes me feel so popular with his smiling, wagging licking. Besides, I'm walking a lot anyway, he's a great conversation piece, his coat goes with my upholstery, he's a nice Jewish dog, and as the Captain, it behooved me to be generous.

What do I have to be afraid of? "Schmulka" is a nice Jewish dog.

Sharon arrived within an hour dragging a dusty dog bed to give me orientation on the care and feeding, sans Schmulka, wanting to be able to speak freely. She was also laden with huge trash bags of kosher kibble, and with a shiny steel and leather apparatus right out of "Braveheart." Looked like she planned to be away for awhile.

"This is his collar," she demonstrated, opening and closing the contraption, much like a stewardess demonstrating an oxygen mask. "If he tries to run away, these metal teeth dig in to his neck to suppress him. Here, try it on."

"Oh, nooo...he's used to it, and if you're squeamish, just use the choke chain. (Insert her shrill laugh here.) Now, this is an extender leash," she deftly displayed. "You can let him wander or snap him stopped. And whatever you do, don't wrap it around your wrist. He'll pull your arm out of its socket if he sees a squirrel. If he does, just let him go. He'll just run back to the animal shelter...that's where he always goes," she whimpered.

And where he'll apparently be euthanized within days of rearrival. The stakes for my correct care of Schmulka and my neighbor's feelings were getting higher. She would absolutely die if something happened to him, she asserted.

"Oh, I get along great with Schmulka."

"He's sooo protective. He'll sleep with you; you'll see! He'll throw his big paw over you -- it's so sweet, you'll love it. But he has big claws -- don't make any sudden moves in the night. If he scratches whack him hard with a newspaper." She saw my flicker of apprehension -- actually more about her than the dog. I was beginning to understand why Schmulka might be suicidal. She sped up the lesson plan.

I was beginning to understand why Schmulka might be suicidal.

"Here's his water bowl (heavy, enormous)...Keep it filled. You can give him a little human food, but nothing bloody. We don't want to get him too used to it, especially if it's not kosher." (Insert her nervous laugh here.) Give him a pound of this stuff a day no matter how he pouts. Oh, and these trashcans are for picking up his stuff. He's a big eater and a big...."

"I get the picture," I said, bidding her adieu till she dropped off Schmulka at six a.m. the next morning, assuring me that "he NEVER barks."

The barking began the minute her car was out of earshot and continued for hours, until one of my yard squirrels tripped by, at which time he started howling and lost control of his bladder. It was time for our first solo flight. I harnessed him up, and he bulleted out my front door. Hey, I needed a little upper body exercise. The rain started as a drizzle, then, as Schmulka dragged me three blocks toward the shelter, it became a downpour, turning his contributions to neighborhood fertilization into silt before my well intentioned, trash-bagged hand could get a grip on it. We were soon both soaked and surly.

I dragged him home prematurely, ashamed of feeling decidedly un-neighborly. What kind of example were I, the Captain, and Schmulka the sloppy setter setting! I lined my kitchen with the trash bags and tried to calm us both, cajoling in a dog speak squeak like Sharon's. The violent shaking off of water, followed by the spilling of his dog bowl, added a new moat effect to my kitchen.

I bathed him, he bathed my bathroom and me, I rubbed us both down and he paced all day long as I wrote till dinnertime, during which he ignored his food and guilt-tripped me out of my pagan turkey burger with his handsome head in my lap. No good deed goes unpunished. He needed to walk and recycle it immediately in the sudden tsunami outside. Thank God it was too dark and windy for anyone to see me burying it. Forget any spooning sleep arrangement, we found one another rather undesirable at this point, and his pacing and whining all night got me pacing and whining, too.

What would Solomon do, I pondered, conflicted. Not King Solomon. Sammy Solomon, the smartest boy in my junior high, a Talmudic scholar at 12, and an expert in Jewish law now as my home town's rabbi?

Sharon's house muffled the barking this week, but Schmulka was more comforted alone in his own house, and, frankly, so was I.

How to Make Jewish Summer Camp at Home