To Tell the Truth...Sort of 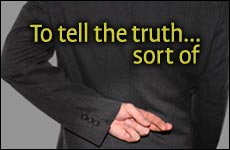 Deceit and insincerity, both subtle and blatant, permeate our lives.Jaded, we either miss it or shrug it off. Neither reaction is acceptable.

People say things and I tend to believe them. People do things and I don't question their intentions. Is there anything wrong with that? Does that make me naive? Optimistic? Gullible? Trusting?

And so it was, not long ago, that I set out one Sunday morning, to find out more about myself. It didn't take long.

Crossing Coney Island Avenue, on my way to several stops, a bold looking sign in a store window caught my eye.

Having an extra blanket is always a good idea, I thought; especially since it was cheap and was on sale for just one day. But as I stood outside the store contemplating this major purchase, I realized that I was pretty sure that I saw the same sign in the same window yesterday…and, come to think of it, two days ago as well. Did somebody say, “Last week too”? I guess the sale was extended. I walked on.

The sun was baking the sidewalks of New York and I ducked into a convenience store for a quick drink. 11:00 A.M. was a bit early for my Diet Pepsi, so I opted for something a bit lighter. The words, “Contains REAL Juice!” printed in banana yellow, grabbed my attention. I bought two. It was only about 10 minutes later, when I sipped the final dreary droplets, that I noticed the other side of the label -- “2% juice,” it read. Oh well.

Just then, my cell phone rang. It was Aaron. He was in the car, on his way to a conference in White Plains. He asked how I was feeling, but I don't think he heard my answer. Of course, the reception wasn't that great. We shmoozed about nothing, as I waited for the purpose of his call. It never came. But I thought it would look cheap if I asked directly what he wanted, just because I had a small number of minutes on my plan and he had unlimited.

“I'll let you go,” he offered after about 25 minutes, as I heard the car door slam in the background. I suppose he reached his destination. It was nice hearing from Aaron.

I took care of half a dozen little chores in the next two hours and by then it was time for that Diet Pepsi. The line was long and the mercury was soaring. Finally it was my turn.

“Jumbo it,” I instructed the fountain attendant as I wiped my sweat with a frayed napkin. He filled me to the top and thanked me for the exact change in one swift motion and off I went with my 24 oz. cup. Curiously, 20 seconds later, by the time the foam settled, the cup looked nearly half empty. “Be optimistic,” I thought. My cup was literally half full-- not half empty. Besides, the kid was probably in a rush.

I sat down to sift through a pile of unopened mail. And it's a good a thing I did. Many of the envelopes said, “IMPORTANT!” and “PERSONAL!”

By late afternoon I arrived home, turned on the radio, and sat down to sift through a pile of recent, yet still unopened mail. And it's a good a thing I did. Many of the envelopes said, “IMPORTANT!” and “DATED MATERIAL ENCLOSED!” and “PERSONAL!”

Naturally, I opened those first and read them extra carefully. One letter suggested that I could actually save a whopping 83% on a U.S. News magazine subscription. I wondered why I merited being selected to receive this most extraordinary offer. And why the publisher would be willing to practically GIVE his magazine away. He's got to be losing money by offering an 83% discount! The small print revealed the answers. The reduction was based on a comparison with those customers who would purchase U.S. News every week for three years for full price at a newsstand. I guess there must be someone out there who does that. Don't you think?

Another correspondence, this one from Delta airlines, stated quite clearly that I could fly to any destination in the world and take a companion along ABSOLUTELY FREE! Now that's what I call an incredible deal. The fact that this offer was being made only if I bought a full fare ticket was, admittedly, somewhat disappointing -- especially when you consider that one full fare ticket typically costs quite a bit more than two of the usually available discounted fares. Oh well -- my wife doesn't really like traveling anyway.

When I put down the pile of envelopes, I was better able to focus on the news that was blaring in the background.

“Coming up --a special report on a shocking medical breakthrough that will change the way we live,” said the animated anchorwoman.

It was then that I realized that she had said the very same promotion three times in last 15 minutes…without ever getting to the special report. I wondered to myself why I was so impatient. If she said that the report is “coming up,” then that's exactly what it means. She never said WHEN the report is coming. So why did I have a problem with that?

The day was winding down when my door bell rang. It was my neighbor, Harry. He was just stopping by to invite me and the family to a barbecue at his house on Wednesday evening. Most of the neighbors were coming too. That was nice of him to include us. And if not for my niece's wedding we would have loved to go. I thought I had told Harry about the wedding a couple of weeks ago. I guess he forgot.

Lying in bed that night, I thought back to the events of the day. “Why are people always so skeptical and suspicious?” I thought. The Torah teaches us to be precise and meticulous in every word we say; in every way we do business and treat each other. It is a value system that, presumably, every culture would buy into.

Perhaps they have. After all, that drink did, indeed, have some real juice in it. And yes -- Aaron was probably just shmoozing me, not using me. And there's no way that soda clerk can wait for everybody's foam to settle. And some people DO buy U.S.News at the stand. (And those same people probably pay full fare when they travel.) And I could easily have missed that report on the shocking medical breakthrough, just like Harry forgot about the wedding.

Now, some people might consider my reaction to be naive. But I can't agree. I simply refuse to be affected in any way, by the cynicism of today's day and age. Whatever happened to taking things at face value? Why can't people just see things in a positive light? No. I will remain steadfast in my unremitting resolve to believe that people do mean what they say and say what they mean. Period. Nothing confusing about that.

Satisfied that I was securely sequestered in my cloak of trust and good faith, I slipped under the covers and closed my eyes. My wife wished me good night.

Hmm… I wonder what she really meant by that.

Just Listen, Will Ya?
The Promise Of The Land
Which Chat Are You On?: Parshas Behar/Lag Ba’Omer
Do You Like Slow-Cooked Food? Thank the Jews
Comments
MOST POPULAR IN Society
Our privacy policy