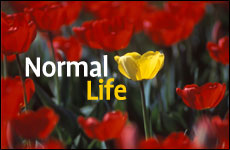 Dear Neighbor, can I be insolent enough to ask that you try to 'understand' just a tiny bit less?

You're probably wondering why I am writing, instead of simply telling this to you tomorrow at the park. I guess you haven't noticed how our conversations have been sounding lately. I've been getting a feeling that we're holding two separate conversations simultaneously -- neither of us really communicating with the other.

Remember those days -- way back then, before my Yitzchak got so sick? Before you even knew that he suffers from a rare syndrome which causes his developmental delays, his multiple health issues and the myriad other problems you've seen? Remember those days when we used to talk about diapers and recipes? We said the same words today, but someone -- and it wasn't me -- seemed to have been attaching a lot more meaning to every mundane line.

You sounded almost apologetic as you hastily replied, "Oh, he's not really walking all that well yet. It will probably be a while before he really walks."

I said, "I don’t really get around to reading much these days."

You said, "When my son was in the hospital with pneumonia I didn't have time for anything."

I laughed and said that Yitzchak doesn't really need an afikoman present this year -- he's been swamped with gifts.

You gave what was supposed to be a commiserating sigh.

I am not sure what that sigh was all about, since all I meant was exactly what I said -- that he's been getting too many gifts lately…

I really appreciate your trying to understand. I admit it's a lot better than crossing the street or explaining how your great-aunt "had the exact same thing." But please, can I be insolent enough to ask that you try to 'understand' just a tiny bit less?

It's true that our family deals with a situation which most people find hard to even imagine. And it's true that we've had a tough year and that our concerns were a lot more serious than what most of you have ever experienced. You know all that -- after all, I saw that you joined the neighborhood list for reciting Psalms and you even sent us a hot supper once. (By the way, thanks again for that!) But we still haven't left planet earth as far as everything else is concerned. We still share the same trivialities as the rest of you. And yes, hard to imagine as it may sound, we can still talk about colicky babies, sky-rocketing prices and indifferent teachers -- and mean it.

We humans like things very simple, so we label our fellow beings into neat, easy-to-remember descriptions. "The guy who's missing an arm." "The divorcee." "The woman with the special needs child." "The girl with that awful hairdo." Then there are some people who get boring descriptions like "Adina's niece" or "the neighbors next door."

But along with these overly simplistic tags, can we also remember that there are a whole lot of other sides to these people? That the guy without the arm is also a fabulous singer, a doting grandfather, and that he hates spinach? That the girl with the awful hairdo is also always happy and nice to be around?

There are so many chromosomes that make up every single one of us (46, in most cases…) that it's a shame that we so often tend to zoom in on the one that’s most striking, losing focus of the rest of them. And I'm not just talking about special needs now.

I am not saying it's easy. And the last thing I want you to say is that it's easy. But I am saying that while we carry on another secret life that you have no experience with, we have never let go of the normal life that we share with the rest of you. We juggle both. Gladly.

So next time you catch me exhausted and frustrated at 7:00 pm, please don’t assume that it was Yitzchak's fault again. Impossible as it may sound, it may actually just be something as "trivial" and colorless as my washing machine having broken down again.

Refugees from the Storm

A Refugee’s Secret Act of Kindness
Should I Break Up, Get Engaged or Keep Dating?
Time Is Your Precious Commodity
A Constant World in Flux
Comments
MOST POPULAR IN Current Issues
Our privacy policy