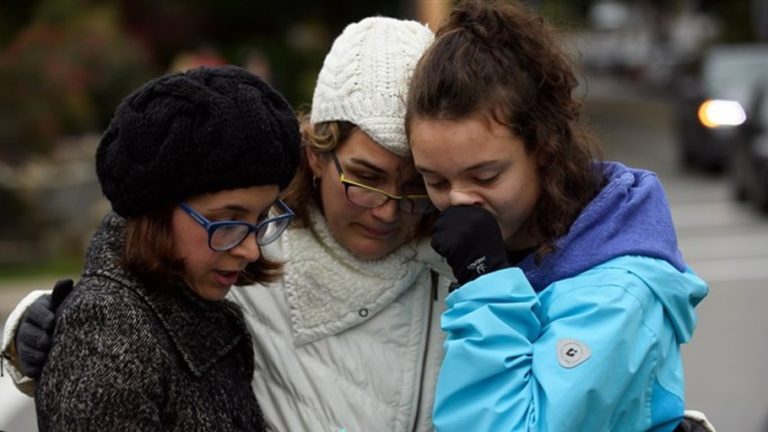 A celebration of life in a house of God turned into a bloodbath.

Words fail in the aftermath of the horrifying tragedy in Pittsburgh.

Eleven synagogue worshipers were brutally murdered while in the midst of their prayers. Six others, including police officers, were wounded. The FBI special agent in charge of the Pittsburgh office, Bob Jones, said that it was the most “horrific crime scene” he’s witnessed in his 22 year career with the Bureau.

The shooter, Robert Bowers, shouted “all Jews must die” while he carried out his massacre. Commentators are already calling this the deadliest attack on Jews in American history.

The name of the congregation in which the attack took place is “The Tree of Life”. But on this day it became identified with death.

What makes this all the more tragic is the event which was taking place at the time. The synagogue was in the midst of rejoicing with a family celebrating a brit milah and baby naming, affirming a child’s identification with the Jewish people.

A celebration of life turned into a bloodbath. And we can only ask, will it never end?

We mourn with broken hearts. But it would be a mistake if we merely perceived this as an attack on Jews, as but another in the lengthy list of anti-Semitic atrocities of history.

When Jews are murdered in a house of God it is an affront to every person who believes that all of humankind was created “in the image of God.” It represents the ultimate rejection of civilized society.

Sadly, what happened in Pittsburgh is not an isolated incident. It is an echo of a kind of evil which we have come to witness in recent times. And it is an evil which, either on a conscious or subconscious level, has a powerful motivation.

Terrorist attacks are heinous crimes no matter where they occur. Carried out in places of worship, their malevolence is not only magnified multiple times but their rationale also takes on a different meaning. That is unfortunately what we have seen with ever greater frequency.

What explains this striking parallelism? Why have churches and synagogues and houses of worship become appealing targets of hatred?

It is almost certain that the perpetrators of these crimes know that they can commit the maximum emotional devastation when they strike at the very heart of the spiritual fabric of the community. Houses of God are sources of inspiration for good. They are the foundations of civility, of respect, of the dissemination of values which make possible human survival.

And that is what makes them such appealing places upon which to express their prejudices, their bigotry and – in the most profound psychological truth – their inner self-hatred.

Simon Wiesenthal warned us years ago that “the combination of hatred and technology is the greatest danger threatening mankind.” We have long been concentrating on the dangers of technology and its awful potential for human destruction. We need to put equal effort into combating the hatred which knows no limits and finds its most satisfying outlet against those very places which bring the world the beauty of God and of love.

In Defense of Having Babies
The Promise Of The Land
Which Chat Are You On?: Parshas Behar/Lag Ba’Omer
Do You Like Slow-Cooked Food? Thank the Jews
Comments
MOST POPULAR IN Society
Our privacy policy