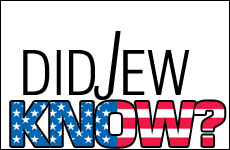 When Elvis Presley was a teen living on Alabama Street in Memphis, his family lived below Orthodox Rabbi Alfred Fruchter, the leader of Temple Beth El Emeth. The Rabbi and his rebbitzen owned something the Presley's lacked: a phonograph. According to Tim Boxer's Jewish Celebrity Anecdotes, young Elvis, while washing his fifty dollar 1942 Lincoln Zephyr coupe, would hear the rabbi's cantorial records, like Shlomo Koussevitsky and Moishe Oysher. In 1954, Elvis asked to borrow the rabbi's record player. He had recorded a song called I Love You, Mama which years later, Rabbi Fruchter said had a strangely familiar rhythmic sound. Wouldn't it be interesting if the King of Rock ‘n' Roll was influenced by liturgical music? Just as interesting is the fact that, many of his early hits, including Hound Dog and Jailhouse Rock were written by the Jewish duo, Jerry Lieber and Mike Stoller. Sadly, they never composed, All Fermisht Up

Not Just Any Jewish Comedian

Richard Pryor's daughter lights shabbos candles? Well, her father was black comedian Richard Pryror, but her mother was Jewish and she was raised primarily by her Jewish grandparents. Rain Pryor, starred in the 1980's sitcom "Head of the Class" but more recently used her eclectic upbringing as a source of material for her autobiographical show, "Fried Chicken & Latkes." Pryor has joked that while growing up she felt "proud, but guilty about it."

Famous Firsts: Ball (and Boychick) One!

The very fist pro baseball player, was none other than a Jew, Lipman Pike, who was born in 1845! "Lip" accepted $20 a week to play third base for the Philadelphia Athletics in 1866, and soon other top players followed his lead. Within three years, Cincinnati became the first all professional baseball team. Not only was Pike the first pro player, he was baseball's first home run champion! The precise number is unknown, but we do know he hit six homers in one game in July of 1866. Primarily an outfielder, Pike, a southpaw, played all positions during his nearly 20-year career, and managed numerous teams, including, the Brooklyn Atlantics, Philadelphia Athletics, Cincinnati Red Stockings and the original New York Mets. Pike died in 1893.

Yippie-ai-oy: Father of the Cowboy Film -- And Jewish.

His name? Broncho Billy. His game? A rootin' shooting cowpoke. There may never have been a Roy Rogers or a Gene Autry had it not been for the grandson of a rabbi, who became the first cowboy hero. Born Max Aronson in Little Rock Arkansas in 1880, Max, (also known professionally as Gilbert Maxwell Anderson) starred in hundreds of westerns. He appeared in the seminal film "The Great Train Robbery" (1903), then, from 1907 to 1919, he was cowpoke "Broncho Billy." Aronson, actor, writer, director, and producer of these short films, not only fashioned new camera techniques that fathered the western, but co-founded the Essanay Film Manufacturing Co., which launched the careers of Ben Turpin, Gloria Swanson, Francis X. Bushman, and Charlie Chaplin. This film pioneer who died in relative obscurity at age 88, was, however, honored with a special Academy Award in 1958.

While working his territory in the Great Lakes area in 1763, Chapman Abram, a Jewish trader was captured during Chief Pontiac's (Chief of the Ottawas) siege of Detroit. He was condemned to death. When tied to the stake, a thirsty Abram begged for a drink. When one of his captors offered a scalding hot broth he threw it into the man's face. Awestruck, his captors saw this action is a sign of insanity, marking Abram as a special favorite of their Great Spirit. They released him immediately -- and returned his merchandise.

Have an Eggroll, Mr. Two-gun

One of the strangest alliances may be that of a London charlatan and SunYat-sen. Born to poor Polish Jewish emigres in 1887, Morris Cohen, a wastrel, connected to revolutionary China when, in a gambling den in Saskatoon, Canada he defended the Chinese owner during a robbery. Cohen went to China in 1922, where he became bodyguard for Sun Yat-sen and a "General" in the Army - all without knowing Chinese. Whether his exploits as tycoon, arms dealer, and adventurer made him a visionary, a hustler (or both), Two-Gun Cohen (who packed two pistols) was a character!

By an Emperor, He's No Emperor

Most people know we have a President, but for a brief shining twenty years, we also had an Emperor! A Jewish one, yet: Norton the First. Joshua Abraham Norton, a London-born Jew (1819) arrived in San Francisco in 1849, and did very well selling mining supplies. Alas, after failing to corner the rice market, he lost everything, disappeared, then reappeared — at the offices of the San Francisco Bulletin -- in seedy navy regalia and beaver hat, proclaiming himself "Emperor of these United States." The amused editor published this proclamation in 1859, and so began the reign of Norton. A beloved figure over the years, San Franciscans bowed and curtsied as Norton sailed through the streets to keep "order." A welcome guest at every public function, his "endorsements" gave him free entree to restaurants and the City paid for his lodging and uniforms.

For You Sports Fan 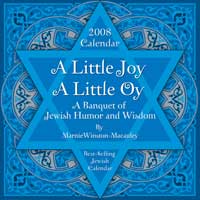 We've all heard of Sandy Koufax and Mark Spitz. But there have been Jews who favored exotic fare. The first featherweight to lift over 800 pounds and press double his body weight was a cantor and rabbi's son! Jerusalem-born (1936) Isaac "Ike" Berger, who came to America in 1955, took Olympic Gold in 1956 with a lift of 776.5 pounds, and the silver in 1960 and 1964. In 1964, he set a record of 336 pounds in the jerk at a body weight of 130 making him the strongest man in the world. His record held for nine years.

More interesting Jewish tidbits can be found in Marnie's calendar A Little Joy, A Little Oy available here.
Like What You Read?  Give Jews around the world the chance to experience engaging Jewish wisdom with more articles and videos on Aish. It would make your mother so proud and as a nonprofit organization it's your support that keeps us going. Thanks a ton!

The Second Time Around6 min read

On the Nose6 min read