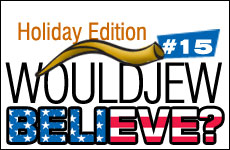 The ancient shofar (ram's horn), of course, is blown in shul during Rosh Hashana and Yom Kippur, as it was heard on Mount Sinai when God gave the Jewish people the Torah. Ah, but did you know that in 2006, a world's record for simultaneous shofar blowing by the greatest number of people was set at Phillips Beach in Swampscott, Massachusetts! The 798 participants beat the record set in 2005 by the Jewish community of Philadelphia, where 400 blew the ram's horn. The sound continued for almost eight minutes! (And no doubt sent elephants stampeding).

The Guinness World Record for shofar-blowing has been around since 2004, supported by Swampscott's Robert I. Lappin Charitable Foundation that promotes Jewish identity among children. Oh, and not all the shofars were blown by Jews. Many from Latin American churches participated as well. Turning toward Israel, Jews and Gentiles trumpeted their way into the record books!

Yankee Ron Blomberg also didn't play on the High Holy Days which earned him the nickname "the Sundown Kid."

GET ME TO THE SHUL ON TIME!

Is there a Jew who doesn't know that in 1934, Detroit Tigers first baseman Hank Greenberg decided not to play during a tight pennant race because it fell on Yom Kippur; and thirty-one years later, Los Angeles Dodgers pitcher Sandy Koufax missed a contest for the same reason, this time in Game 1 of the World Series? But did you know that Yankee Ron Blomberg, who became Major League Baseball's first-ever designated hitter in 1973, also didn't play on the High Holy Days which earned him the nickname "the Sundown Kid."

Said Blomberg about the 1971 game at Yankee Stadium against Cleveland: "It was nearing sundown at home, tie game, two outs in the bottom of the ninth with a man on third base. I'm up. If I don't do it, we go past sundown, and if we go past sundown, I'm going to have to leave. I hit a single to center field and we won the game. From that day on I was idolized by every Jew in the city."

He also had to deal with anti-Semitism from fans and some of his own team mates. His ordeal is described in Designated Hebrew, a fitting title for his biography.

Ah ... but we MOTs have come a long way. It was recently announced that ESPN, and Major League Baseball will "atone." The start time of the Sept. 27 Red Sox-Yankees game this year will be moved back after the ganza backlash for the change that put play in the middle of Yom Kippur! The game will now start at its original time of 1 p.m. instead of 8 p.m.

QUICK: How can you tell the gefilte fish from all the other fish in the sea? ANSWER: It's the one swimming around with the little carrot on its back. (I hear you groaning!)

And speaking of "carrots," the orange veggie is a staple in Jewish cuisine, more so during the High Holy Days. The Yiddish word for carrot is "mern" – but only as a noun. As a verb, it means, "multiply." Eating carrots then, is a two-in-one win. A tasty, health veg, but also a wish for many years to come!

"Mistah ... Give'm Some Chicken Soup!" So starts one of the oldest jokes in Jewish history, as the bubbe shouts this command during a play when an actor fell ill and died. Told it wouldn't help, she responded, unfazed: "Vouldn't hoit." Before soup, we need to talk chicken, which was probably introduced to Europe by – Roman legions! Except for Egypt, the skinny fowl didn't flourish during the Middle Ages. Chicken soup, however, gained its Jewish penicillin healing rep early. In the 12th century, Maimonides, passed down this wisdom from his own teacher, Abu Merwan ibn Zohar.

AND WHILE WE'RE ON THE SUBJECT, GLOBAL BREAK FAST

The quintessential break fast worldwide is chicken soup and kreplach, however, Jews around the world break the fast with cultural 'tude.

There is scarcely a Jew anywhere who hasn't felt the power of this mournful prayer, but relatively few know that Kol Nidre is actually a legal statement, in Aramaic! Did you know that the moving chant many regard as a voice of Jewish suffering, was also used, in part, by Beethoven in his Quartet in C Sharp Minor?

On a particular night after Yom Kippur, Jay Leno encountered dead silence after delivering his monologue on The Tonight Show. Thinking fast, he quipped in an aside, "It's tough to get good jokes written during a Jewish holiday."

"It's tough to get good jokes written during a Jewish holiday."

A GOLDEN THANK YOU

"I felt I had been caught up in a torrent of love so strong that it had literally taken my breath away. Out of that ocean of people, I can still see a little man who kept popping up in front of me and saying, ‘Goldele, lebn zolst du. Shana Tova! (Goldele, a long life to you and a Happy New Year.) All I could say, clumsily, was one sentence in Yiddish: ‘A denk eich vos irh seit geblieben Yidden' (‘Thank you for having remained Jews')."