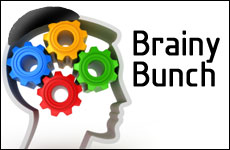 Does being Jewish make us smarter?

Lately I’ve run across a slew of articles suggesting ways we can all get smarter. One article loaded with thirty-one such tips pledged not only to make us smarter, but to do it fast. Perhaps someone figured out that our plummeting attention spans, shrinking vocabularies and eagerness to be featured on reality TV shows is becoming a national security risk.

As a Jew, few things are more alluring than tacking on some points to the old I.Q.

I would also like to become smarter as fast as possible, because as a Jew, few things are more alluring than the prospect of tacking on some points to the old I.Q. What our Tribe may lack in numbers (less than a fraction of a percent of the world’s population) we make for in Nobel Prize winners (nearly twenty-five percent). Only anti-Semites would dare to begrudge us our standing as a brainy bunch, and who cares what they think, anyway? As a persecuted people, one of the few pleasures we have is the ability to fire our 150 trillion brain synapses with such speed and skill that we kick the metaphorical sand in the face of the proverbial 99 I.Q. weakling.

But we dare not rest on our Nobel laurels. Especially not me, since I have never won nor will ever win one a Nobel Prize, though I imagine it would look rather handsome on the fireplace mantle.  Firming up the gray matter involves more than just popping blueberries and swilling pomegranate juice, I realized, so I launched Operation Higher I.Q. by taking an online test to measure my brain acuity. After answering many questions about my personal life, including how often I ate fish, exercised, tackled Sudoku puzzles and met with friends, I scored a B+. Respectable, certainly, but I resented losing points for drinking several cups of caffeinated coffee a day and failing to travel to foreign countries to expand my intellectual horizons. Besides, I read about a study proving that lab rats zapped with jolts of caffeine displayed greatly sharpened brain connections. Who am I to argue with a lab full of java-crazed rats?

The web site that tested my brain battery also offered loads of wit-sharpening exercises, so I went to work: calculating simple math problems that popped up at increasingly rapid rates, trying to pinpoint where both a bird and a numeral had fleetingly appeared on a map, filling in “word bubbles,” and attempting other mindful feats. When I scored 1,217 points, I felt smart. But when I realized that I couldn’t find out what my score really meant until I paid to become a member of their brainy club, I felt the sensation of several points falling from my I.Q.

Fatigued by those cerebral calisthenics, I took a break to review those articles about how to fire up my noggin’s neurons and keep them humming like a well-oiled thinking machine. Researchers believe that engaging in particular activities could help boost I.Q. by as much as 21 points, while failing to nurture the noodle could also cost nearly that many points. The brain’s capacity to change this way is called neuroplasticity. Believe me, adding this word to my vocabulary made me think that there might be Nobel Prize hope for me after all.

Not surprisingly, some of the advice I read was contradictory. For example, aerobic exercise is a surefire way to buff the brain, but on the other hand napping refreshes the brain and lets us hang on to new information. In one study, students who took a 90-minute nap in the afternoon after trying to learn 120 new names and faces remembered more of them than the non-nappers. Duh! Leave it to a well-funded university study to prove the obvious. If those college students can figure out how to land grown-up jobs that still give them a generous naptime, they really will be smart.

Some advice about getting smarter was just dumb. One “expert” claims we should frown more than we smile, since the act of frowning increases skepticism and makes us more analytical. Maybe, but it also makes you lose friends. Fuggetaboutit.

Foodwise, I seem to be doing right by my bean. I eat as much dark chocolate as I dare, and my husband enjoys red wine with dinner several evenings a week. (Both contain memory-boosting flavonoids.) Yogurt is also supposed to be good for the brain, so I’m in good stead there, too. (Must be all those active cultures inside!) This leaves turmeric as the only problem brain-boosting comestible. Maybe it does help prevent dementia, but seriously, how much turmeric can anybody eat? And once it gets on your clothes, good luck getting it out.

I was happy but hardly surprised to learn that many of the top smartening tips come naturally to us Jews. For example, learning a second language tones the prefrontal cortex. Hebrew ulpan, anyone? Kids who learn to delay gratification end up with higher SAT scores, so when your 4-year-old learns to wait a few hours after her meat for some ice cream, just think: you’re not only teaching self-discipline, you’re getting her one step closer to a college scholarship. Involvement with intellectually stimulating activities? Puh-leeze. Who gets their noggin neurons in a knot more often than we Jews, trying to understand the deepest insights of our sages? No wonder that every time I read the weekly Torah portion with commentary I can practically feel my synapses flexing. If only lifting our heavy, holy books could tone my arms to the same degree! We exercise not only at the gym but when we dance at simchas, and we display feats of tremendous physical coordination while balancing our plates at a crowded Kiddush, after which we refresh our brains with a Shabbat nap.

Hey, no wonder we’re so smart!