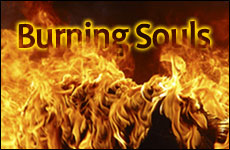 There are pivotal moments in life when we catch a glimmer of what lies deep within us.

I often wonder on which side of the moral fence I would have stood during the Holocaust. Would I have been one amongst the myriads of unsung heroes, sharing my last morsel with someone even weaker than I was? Or would I have become one of the notorious kapos, exploiting my brothers' misfortunes to save my own hide? Would I have used my position in the Judenrat to further only my own survival, or the survival of others as well?

I think it is impossible to decide conclusively where one might have stood, without ever having set foot in the inferno.

Each person has a deep reservoir of untapped possibility within them. Sometimes that potential can lie fallow forever. But once in a good long while, you get an unrestricted view deep inside your own well, and you see that wading down in the gloom is a pinpoint of light, luminous as a beacon.

I remember one of those times.

Way back in high school, I had a special friend named Rachel. I met Rachel through an organization I volunteered with, helping to enrich the lives of people with special needs. Rachel was mentally and physically disabled. She realized that her social life was not up to par with that of a "normal" seventeen year old. My heart ached for her and we decided to meet for lunch each week in my high school cafeteria. After a time, people got used to her presence, and for just a few moments each week, Rachel was able to stand at the periphery of normal high school existence, almost -- just almost -- blending in.

Our weekly meetings augmented my own life as much as they enhanced hers. Her sanguinity, coupled with her unpretentious appreciation of just being alive, helped to keep my teen-age angst at bay.

And so it went, week in and week out, every Tuesday.

One Tuesday, Rachel and I sat over bagels and chocolate milk. I was leaning in to pick the soft strains of her voice out of the cacophony when the fire alarm bells suddenly clanged into our conversation like an unwanted visitor.

I startled, then sighed. A fire drill. I would have to get special permission to use the elevator with Rachel. She had full braces on both of her legs and she walked with crutches.

I looked at Rachel, her eyes were wide, questioning, begging. "You go," she said. "I can't do it."

That's when I saw Ms. Kapnes running out of the teachers' room, screaming "Fire!"
Then I smelled the smoke. Drills went up in a puff of smoke as the student body went running wildly for the stairs. My heart was drumming to some alternate rhythm, as I sat, rooted, helpless, wondering.

I looked at Rachel, her eyes were wide, questioning, begging.

The spring released and I moved.

"I'm not leaving without you." The voice came up from deep within my well. I didn't recognize the cadence.

"But I can't do it, it's impossible. I'll take the elevator."

I had learned enough about fire safety to know that we were not going that route. I smelled the smoke and I felt, or perhaps imagined, the prickle of heat at my skin.

I was experiencing the raw fear of death. But she was my responsibility; I had no choice.

Then I looked at the door. Maybe I did have a choice. In my mind, my body was running out those doors, while in reality, my feet were embedded in the cafeteria floor.

And so, it seemed that I had made my choice.

I hoisted Rachel up and looked around wildly. Most of the room had emptied. Then, from behind me came Sarah, a teenage angel.

She took Rachel's arm and slung it around her neck. "You take the other arm," she instructed me. I followed dumbly. "Now, together -- we walk."

Some of Sarah's overflowing strength poured into my well.

"Rachel, you can do this." I knew that she had upper body strength. "We can make it out. You just need to focus all of your energy into your arms, and haul yourself up these steps."

Rachel seemed grateful for our confidence. I was grateful for Sarah's confidence. We slowly began our ascent, each step an obstacle that could only be conquered through strength, perseverance and love.

"It's okay," Sarah whispered gently to Rachel, when she stopped to catch her breath.
"You're doing great."

"Just a bit longer," I urged her along, though the sunlight had never seemed further away.

And then something incredible happened.

Somewhere along the way, somewhere between the basement and the first floor, somewhere between heaven and earth, a transformation occurred. I let go of my fear and held on to my goal. The here and now, each breath we took, became valuable in and of itself. This survival struggle was inherently beautiful, the outcome less significant. The greatest value of life was being expressed at that very moment, in one pure act of giving. Our struggle had become larger than life itself. No flames could burn more ardently than the three burning souls trudging up that stairwell.

And it was then that I caught a glimmer of the lives of true heroes. Those Jews that had smuggled food across the barbed wire fence into the ghettos and those gentiles who had harbored Jewish fugitives at great risk to their own lives. They chose to extend themselves beyond the normal urge for self preservation. With the world around them so base, it took a whole lot more than common decency to fortify themselves against the opposing forces. It was their choice to catch sight of that luminescent flare within their wells.

And once they denounced evil and chose to fill their lives with goodness, at any expense, the pleasure must have been all theirs. The struggle for survival paled when compared to the struggle to do what was most honorable.

Rachel waved her crutch up in the air in accomplishment when we finally reached the street.

"You did!" Sarah hugged her.

I did it too! I thought to myself.

And it was good to know.

The KKK, Dr. King and a Kumzits