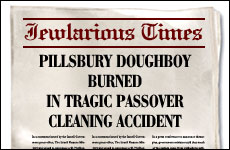 JEWLARIOUS SATIRE (THAT'S RIGHT, IT'S NOT REAL. IT'S JUST SATIRE!):

Friends and family are in shock today as the once loved Pillsbury mascot is being laid to rest after a tragic Passover cleaning mishap.

In preparation for the festival, Jews around the world clean their homes and destroy what they call "chametz" or leavened grains. They ceremoniously burn bread or dough to commemorate this obligation. Unfortunately, the Pillsbury Doughboy was mistakenly burned by Pillsbury's own cleaning crew who were preparing company facilities for Pillsbury's new line of Kosher for Passover "Pop'n Fresh Matzah."

Susan Mason, a spokesperson for the Pillsbury Company, expressed sadness for the loss of what she called "an American icon" and said that her thoughts were with the Doughboy family at this difficult time. "When we think of the Pillsbury Doughboy, we should all remember how he made us feel when he giggled after we poked him in the stomach. Just by being close to him, by touching his soft doughy exterior which protected his inner creamy filling, we were somehow changed by the experience. We know the world joins the Pillsbury Company as we say goodbye to our little phyllo-filled friend."

Unfortunately, some groups have seized on the Doughboy debacle to make anti-Semitic accusations. "This was no accident," said Matt Beal, a known white supremacist. "For thousands of years the world has been claiming that the Jews were using the blood of dead children in the baking of their Passover matzah. And now we finally have proof! Not only are they using girls and boys, but they are killing innocent little Doughboys too!"

Rabbi Mark Levin, spokesman at the Anti-Defamation League, said that such accusations are just the same old baseless canards that have been leveled against the Jewish people from time immemorial. "The allegation that the Jews used the Pillsbury Doughboy in the baking of our Passover matzah is simply preposterous – he is chametz! I have news for Mr. Beal and every other anti-Semite out there: all bad things in the world are not the fault of the Jews. The next thing you know, they will be accusing every Jew who eats some ‘Smores' (chocolate, graham crackers and marshmallows) of murdering the Stay Puff Marshmallow Man."