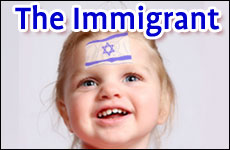 Our children are becoming real Israelis. We are both very proud, and very afraid.

Last night a Yemenite rabbi appeared at my door. He had the whole costume on -- white robe long beard, even longer payot (sidelocks), and a big white kippah. It turned out he was the air conditioning repair man.

That about sums up my experience as a new immigrant to Israel.

Not so new any more, as I have already celebrated my 1st anniversary of becoming an Israeli. As I look back over the past small while I'm reasonably happy about the way we've been acclimating to this strange new world.

For example, last week we reached a real milestone -- we bought a new car!

When we first arrived in the "land of milk and honey" we bought a cheap old mini van to use until we decided what sort of car we wanted. What we didn't know was that this car had been dug up from its final resting place, and reburied in an eerie ancient Indian burial ground (and they're not so easy to come by in Israel).The cursed soil worked its dark magic on this car and it reanimated its lifeless carcass back to a semblance of life for my family to drive.

So, our family has been happily tooling around in an automobile that longed for death. It has taken us on many fun family outings whilst silently begging us to end its torment.

But the end was indeed neigh, and we finally decided to purchase a new car. We had even decided on a model – and one which came with a free in-car DVD player. My children were whooping with glee at the very thought!

Buying a car is a little different than I am used to. For starters, there's no haggling over price. It's the same as buying detergent, only bigger.

We took my youngest daughter, Yael, with us to the car dealership as she had been off from school that day. She is five years old, cute as a button, blond haired and blue eyed, and the image of my mother, of blessed memory. She also has the ability to hypnotically control and dominate the will of any man.

We sat down with the salesman to work out the details of our new purchase. He informed me of the price which I won't reveal here -- cars in Israel are vastly more expensive than the U.S., and I don't want to cause anybody with a heart condition to be rushed to the nearest emergency room.

Then little Yael said something in Hebrew to the salesman. Her Hebrew is far superior to mine -- she picked it up the moment we landed. I have no idea what she said, but off the salesman trotted and returned with a cookie.

"Todah" (thank you) said Yael with her big blue eyes in her sweet sing song voice. All of the sudden, something miraculous happened -- several thousand dollars fell from the price!

I sensed weakness; he was willing to negotiate after all. Perhaps we could get him to throw in a few options like the leather seats and the 6-CD changer. Neither of which really appealed to me, but my wife liked the idea of leather seats.

"Is there anything you can offer us to sweeten the deal," I asked the salesman. "A GPS system? Take a little bit off the price?"

I don't think I'd feel that bad really.

So finally my wife convinced me to get the leather seats and the 6-CD changer. "The seats will be easier to clean," she said.

"Yes, but only if we actually CLEAN them!!!" I replied. On the evidence of the rotting compost we've cultivated on all our other cars that's a rather slim hope.

The salesman filled out the paperwork, and then Yael said something else in Hebrew, and giggled. The salesman smiled and then laughed.

He then crossed out some numbers and put some new ones in, and handed me the forms.

Another few thousand shekels had been dropped from the price.

I looked at Yael, and she looked at me. She then mentally commanded me to sign the papers before her spell wore off. And as with any male, I obeyed.

And that's when I realized that my daughter is Israeli.

The Second Time Around
For Every Individual, A Torah Scroll
Allegiance To The Monarch
Meet the Real You: Yom Kippur
Comments
MOST POPULAR IN Jewlarious
Our privacy policy
Aish.com Is Looking for Great Writers