Jazz and the Abstract Truth 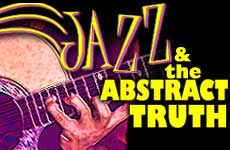 A story of one man's spiritual journey that took some unusual twists and turns -- jazz studies, African drumming, pretending to be Malcolm X.

My liberalization began in college.

I left the safety of North Jersey for a music school in New England to get a degree in Jazz Studies. I grew my hair long and began to dig being multicultural. I played the guitar.

My Jamaican roommates told me, "You play too white, man."

"You need to be more black."

I turned my back on Iron Maiden and got into Mingus, Dolphy, Coltrane, Monk. I submerged myself in Black culture.

"You need to be more funky," my roommates told me.

I discovered James Brown and somebody taught me about backbeat.

I grew angry and radical -- I made my parents watch Spike Lee movies.

Public Enemy came next. I grew angry and radical. I made my parents watch Spike Lee movies.

My journey into Black America was regularly jolted by the almost monthly tirades by Winton Marsalis in "Downbeat" magazine: "The white man is stealing our culture."

He might have been right but I didn't like to be told that. I played the guitar well and I knew the genre better than anybody.

My black friends were more succinct: "You play pretty good ... for a white guy."

For some reason I just didn't fit in.

Things began to change when I met Al while still in college. Al was an ethnic Italian from Long Island. He was earning a degree in classical composition.

We met at a gathering of Free Jazz intellectuals. Everyone there was rich or crazy. I think I was wearing a "Metallica" t-shirt that night.

Al was the first person who understood me; he was also an alienated white kid. We struck up an immediate friendship. We talked about Schoenberg, microtonal composition, and we read a lot of Bukowski.

As we grew closer, we began to insult each other.

Al was determined to teach me how to eat. He brought me to his parents' and fed me. His father called me "Jerusalem."

They were good people, they stuffed me till I couldn't move and let me crash on the couch.

I brought Al to a Ukrainian restaurant in Downtown Manhattan and bought him kasha.

I tried to return the favor. I brought Al to a Ukrainian restaurant in Downtown Manhattan and bought him kasha.

"You're feeding me sand," he said.

Our friendship had its limits.

My Jamaican roommates stopped talking to white people. Small groups of militant youth would assemble in the living room. They'd speak in hushed tones. They wanted to take over City College. They began to vandalize the apartment. Someone wrote, "the white man is for the Devil" on the wall.

I was jealous. I envied the fact that they knew who they were. I had no idea who I was.

I thought of Al. He knew who he was.

It occurred to me that I also belonged to an oppressed minority.

I confronted my roommates: "I laugh at your four hundred years of suffering!"

They thought I was crazy.

I didn't believe it either. I decided to move to Ghana and get a Masters in ethnomusicology. I took up African drumming.

Ghana didn't work out, I ended up in Paris.

The youth hostel had a mandatory all day lockout. I'd spend my mornings in a bookstore guiltily reading a used copy of Malcolm X. In the afternoons I'd wander aimlessly.

I began to think I was Malcolm X. I'd rant and vent and mutter rebelliousness under my breath.

But I wasn't a sixties radical. I was a sheltered Jewish kid from the suburbs. Malcolm's oratory began to be transformed by my personal filter.

"These assimilated American Jews with their Anglicized last names and nose jobs. Fight the power!"

I was referring to myself. I realized it was time to go to Israel.

I was herded into a small, packed room of about 150 men dancing with incredible intensity. The noise was deafening.

Someone threw a sheet over me and handed me a Torah scroll. I began to sweat profusely. It was then that I had my first revelation: There wasn't a band playing!

All the noise was generated exclusively by men singing and stamping on the floor. I couldn't believe it.

Judaism was as tribal as any Third World ethnicity I could have tapped into.

Judaism was as tribal as any Third World ethnicity I could have tapped into. It wasn't about the High Holiday fashion show, liberal politics or church organ I'd been exposed to over the past twenty-five years in America.

The Jewish people were a primal funky earth culture!

I looked up at the Head Rabbi. He looked like a Zulu chief straight out National Geographic. The purple sash and spear were replaced by a black suit and white beard. His eyes had the same intensity and ethnic pride.

I'd found my people; they were just a bit more conservative.

"I DIDN'T HAVE TO PRETEND"

About four months later I was alone in a Jerusalem study hall. It was late. I looked up at the hundreds of beaten books staring down at me from the shelves.

Then it hit me.

These books were written for me. I didn't have to apologize and pretend I was something I wasn't in order to learn them. They were mine.

Had I gone to India and sat on a mountaintop, they would have told me, "You meditate pretty good ... for a Jewish guy, why don't you go to Israel and check out your own people."

I'd found my culture, my heritage, my people.

One Drink Too Many: My Journey of Breaking Free from Alcohol
The Scandalous History of the Aleppo Codex
Who was Two-Gun Cohen?
Why Really Everyone Believes in Free Will
Should Jews Support Ukraine?
The Jews of Cuba
Comments
MOST POPULAR IN Spiritual Odysseys
Our privacy policy