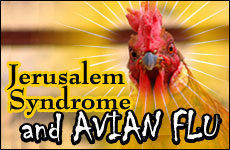 JEWLARIOUS SATIRE -- An American tourist named Ryan Davis visiting the Holy Land this month contracted two rare diseases at once. The first, "Jerusalem Syndrome," takes hold of visitors who suddenly believe that they are the reincarnation of the messiah. The second is the much talked about "Avian Flu," or Influenza A virus that has been transferred from birds to humans and is currently the world's major flu pandemic threat.

Davis, formerly a metal trader from Seattle, has renounced his previous life and now only responds to the names "King Messiah" or "Colonel Saunders."

"I am the one who the Lord God has chosen to lead his people to the Promised Land," said a visibly confused Davis. "I am here to usher in the era where the lion will lie down with the lamb, and that lamb will be dipped in a tasty deep fried batter, available only while supplies last."

"I usher in the era where the lion lies down with the lamb, dipped in a tasty deep fried batter."

Medical health professionals in the Jerusalem area say that they see approximately 300 cases of Jerusalem Syndrome each year. What makes this case different, says Hadassah Ein Kerem Trauma specialist Dr. Eliezer D. Jones, is Davis' fixation with birds. "I have had Mr. Davis under my observation since this morning, and he is now clucking and pecking other patients. I hope the real messiah comes soon because I can't put up with this much longer."

Jones added that the fact that his patient had succumbed to two diseases at the same time was also an irregularity. When asked which of the two Davis had contracted first, Jones waxed philosophical. "Which came first, the chicken or the egg?"