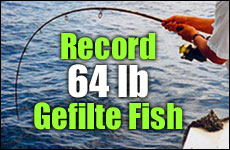 With records nearly shattered each day during this year's hyper-competitive Gefilte Fishing season, it should come as no surprise to avid sport-fishing fans that veteran Gefilte Fisherman Eli Kozlowski finally smashed a two thousand six hundred and thirteen year old record, catching a 64 pound Gefilte along the shorelines of Lake Anakatan in Central Minnesota. With descendants of former record holder Shimon Ben Ur of Babylonia on hand, Kozlowski lifted the Giant Gefilte from the water and placed it in a bathtub full of jellied broth. "I reeled and reeled and barely broke a sweat," Eli said. "Even for a Gefilte, she was a spineless beast". 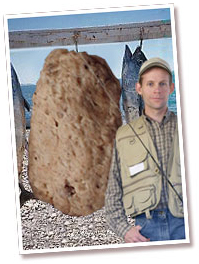 Eli displayed the Gefilte briefly for a photo-op, before his wife, Deborah, carved the record-breaker into 148 balls, placing 296 carrot slices, leaves of lettuce and cherry tomatoes alongside. Those watching the competition were in awe. "I was there when Barry Bonds hit his 73rd," said avid sports fan Michael Tamowitz. "I was in the stands when Gretzky scored his 894th goal, and was in the audience when Mike Tyson bit off Evander Holyfield's ear. I knew that I had to be here to see this mammoth Gefilte get scooped out of the water so I could share it with my children – and it was every bit as magical. We may never see a Gefilte as magnificent as this ever again." Tamowitz's youngest son Danny, wearing a Manischevitz shirt and hat, could not contain his exuberance and admiration, "When I grow up, I want to be just like Eli, but I want to smell less like fish".

Yet, Kozlowski's was not without his critics; Greenpeace, a long time foe of Sport Gefilte Fishing, issued a statement decrying the catch, stating, "We call for an all out ban on Gefilte-Fishing. The Giant Gefilte Population has dwindled to dangerous lows and a miracle of nature has been caught, slaughtered and served with Chrain (horseradish). This is nothing to celebrate."

In response, Kozlowki said that he undeterred by his detractors, and is simply taking some time to savor his sweet achievement. When asked what he plans on doing next, Kozlowski responded, "I'm going after any and every record that will make my people proud. Next, I plan on baking the world's largest latke."