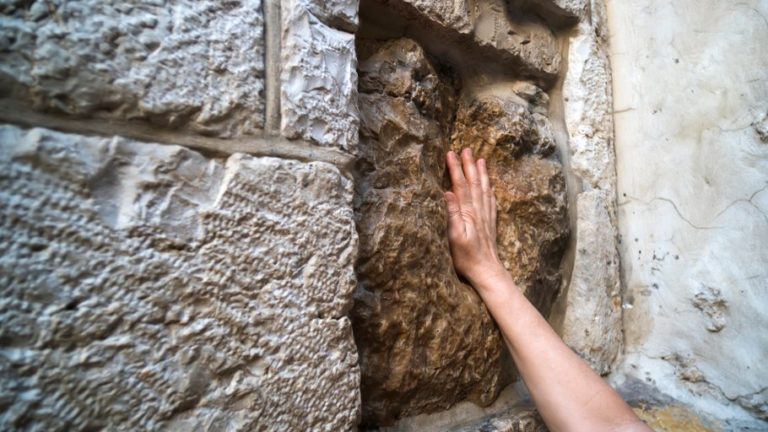 In Israel we don’t like uniforms. This is why it looks like the mailman is stealing your mail.

Yom HaAtzmaut – Israeli Independence Day is upon us so it’s time to talk about what makes Israel special. Here, I bring you a little ode to Israel. A list of some of the beautiful aspects of Israel I noticed this year. Oh. How I love thee.

In Israel there are holidays all the time. You have Yom HaAtzmaut, Yom Yerushalayim, Yom Revi’i. Translated, this is Independence Day, Jerusalem Day, Wednesday. Anything to get out of work. No, some of us do not work on Wednesday either.

Belief in God permeates all, making everything positive. People doing renovations on the apartment above me, I heard, “They are settling the land.” And I did hear them settling the land. Especially while I was trying to sleep.

Voting is a religious duty. As the Shas party said, “It’s a Mitzvah to vote.” So I voted for Blue and White. I am not a sinner.

The way people cross the streets, there is so much belief in God in Israel. I cross at crosswalks and look both ways. The real Israeli just put their head down and cross. And the way people drive; the Hebrew word for it is Emunah.

The Biblical Zoo in Jerusalem. Unique it is, with all the biblical animals, like penguins.

Cities in Israel are built creatively. Most places around the world are built on a grid. That is a modern invention. Not Israel. We build the streets artistically, to the shape of the mountain. Roads are built in figure eights. A country of ancient creativity, we have landscape architects planning roads, drawing abstracts.

We allow for wildlife to live freely. Cats are everywhere.

We don’t do uniforms, so that it looks like the mailman is stealing your mail.

Israelis love Tradition. “The Taste of Yesteryear” is written on half of the falafel stands. For some reason, no matter what the spice says it is, it’s actually cumin.

Shoko BSakit. We have chocolate milk in a bag, so that when you think you finished it and think it’s done, it spills all over you.

We have coffee that doesn’t dissolve. It is like a miracle brought in from Turkey. When I finish the coffee, there is more coffee inside of the cup then when I started the coffee.

We can eat whatever we want in the supermarket. If you can knock back an entire avocado, go for it. In America, they have tasting stations. You can’t choose what you want to taste. You take something and they make you feel uncomfortable for opening the pack of chips and not buying it. Not very welcoming. In Israel, we take it and don’t ask, and it is fine. As long as you eat it in the supermarket, it’s free.

You can go to any falafel stand and eat for free, if you bring your own pita. All the salads and dips on the side are free.

You can take anything out of the hotel dining room. Nobody will ask you any questions. I was at the Dead Sea for breakfast and people were filling up shopping carts.

People are so friendly. In the Shuk, when somebody is trying to sell you something, they call you “My Friend.” Even if they don’t know you, when they are selling you stuff, you are their friend.

People in the shuk yell the prices because they care about all segments of society, and some people can’t read the sign with the price written on it, by the melon. Or some may be hard of hearing and for them the excessive yelling is making the shuk more accessible.

There’s an Israeli law that every third song on the radio has to be in Hebrew, in order to interrupt the good songs. You can’t have English songs playing all day, that would make Israel feel too much like Russia.

They have Chasidic songs on the radio. Each Chasidic song has the lyrics of “yay nay nay” so that everybody can sing along.

The People of Israel Care

People here don’t say “excuse me,” not because they are rude. Pushing and bumping is our Middle Eastern way of hugging.

Society is replete with statements of advice for everything. When there is a bad day, somebody will say, “Some days are honey, some are onions.” The way food is used to help you understand life is unparalleled. My car wasn’t working, a guy passed me and said, “Shower and drink coffee.” He didn’t fix my car, nor did he help me push it. Nonetheless, afterwards, I felt clean and more awake, allowing me to be more aware of how bad my engine problem was.

Israel is one big family. Nowhere else in the world do strangers feel comfortable enough to criticize me to my face. What a beautiful experience for a random person to come over to me and tell me how ugly my sweater was. That is family. Israel is a home for all Jews. We even accept immigrants from America, who tell them how they should live. Any other country would kick them out for being annoying.

For those of you who are not in Israel, this Yom HaAtzmaut, think about your true home. Think about your friends in the startup nation who made a decision to start up their own business, because they don’t want to work for a boss. Celebrate the character of the Homeland and connect to tradition and community. Go to the grocery store, sit in the produce section and eat with your friends. You might get kicked out, but at least you will have shared in the Israel communal spirit of not paying for groceries. Don’t worry, have Emunah that God will protect you, as He has the people of Israel.