The Nazi and his Jewish Grandchildren 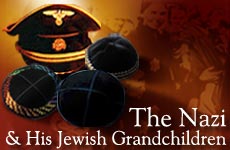 My father took a leading role in the slaughter of Jews. Was our family tainted with evil?

In a trip to visit Israel, Rabbi Berel Wein attended morning services in a synagogue in Jerusalem. He relates that, unlike his own synagogue, which has benches facing the front of the synagogue, this synagogue had tables and benches, so he was forced to look at those praying opposite him. A tall, blue-eyed, blond-haired man and three blond small boys walked in and sat down opposite him. Rabbi Wein is used to the racial diversity of the citizens in Israel so little surprises him, but this was different; this particular family was definitely Aryan.

More noteworthy than their racial features was the seriousness and intensity of their praying. The children were especially well-behaved and followed the service dutifully without once wavering in their concentration. For Rabbi Wein, accustomed to the more freewheeling American child, it was an unusual experience.

Afterward, the rabbi remarked to a friend that they looked like fine people. His friend said that the man was a microbiologist at Hebrew University who happened to have an extraordinary story to tell. "Would you like to hear it?" he asked, and without waiting for an answer, called to his fellow congregant, "Avraham, this is Rabbi Berel Wein. I'm sure he would like to hear your story."

The two shook hands and agreed to walk home together. As they went, the rabbi listened to him tell the following story:

"I was born and brought up in Germany. My father was an officer in the elite SS killing squad, the Totenkopf (Deathhead Squad). He served throughout the war and after it was over successfully eluded apprehension. But his crimes were so heinous that years later the West German Republic continued to pursue him. Finally, he was caught and imprisoned for ten years. Later, because he was so old, they reduced his sentence and let him out after four and a half years.

It was a bewildering experience to find out that my father led such a monstrous life.

"My father never talked about his past, and when he was caught, I read about his crimes in the newspaper. It was a bewildering experience to find out that my father led such a monstrous life.

"The family was shaken by the news. I was a teenager and became very confused by all the notoriety. When we went to visit him in prison I couldn't go in to see him. I felt as if he betrayed me. However, one useful thing came out of this -- I developed an interest in the War and found out as much as I could about the Todtenkopf and its role in the Holocaust.

"All this occurred around that time the Eichmann trial was taking place, and Holocaust material began to be published. I read all I could find and was able to get a general picture of what happened to the Jews. What I found out horrified me and the thought that my father took a role -- a leading role in the slaughter -- made me feel that perhaps our family was tainted with evil. If the conditions were the same, I asked myself, could I too become a killer?

"I took a trip, getting as far away from Germany as possible. It was as if I was haunted by Germany and all things German... On the way, I decided to visit Israel to get some perspective on the victims of the Nazis and find out what was so special about this nation that so consumed Hitler. I needed to come to terms with what was churning inside of me, and I toured the country, working periodically here and there on agricultural settlements.

"While in a kibbutz, I saw a poster advertising a summer's program at Hebrew University in desert zoology, and I enrolled. I did very well and in the fall was able to register for a graduate program at the university. While I was engaged in graduate work, I also became interested in Judaism.

"I loved Israel so much I just stayed on and applied for citizenship. Also, after about two years of learning about Judaism I decided to study to become a Jew. A few years later I earned my Ph.D. in microbiology and became a Jew. I married and settled in Jerusalem. My wife was a German Lutheran, but she, too, converted. A psychologist might interpret my conversion as sublimating my guilty feelings, but I prefer to think about it as fulfilling my Jewish destiny. Don't ask me how or why, but here we are -- an observant Jewish family. And we are very happy living as Jews.

"About a year ago we learned that my father was not feeling well. My wife thought it would be a mitzvah to visit him and show him his grandchildren. At first I was apprehensive about going back to Germany, a country I now feared. But in the end, I took a sabbatical and we went back to Darmstadt to visit with my father.

When he first saw us, my father was overwhelmed, and initially, couldn't bring himself to embrace anyone.

"It was quite a scene. My boys wore their yarmulkas, and had their tzitzis (fringes) showing. Their payos (sidecurls) were tucked back behind their ears and, of course, they spoke Hebrew.

"When he first saw us, my father was overwhelmed, and initially, couldn't bring himself to embrace anyone. Later we got to talk and he seemed to be pleased by the way things were turning out for us.

"My father is very old now, over ninety, and I wanted to know what he did to merit such a long life with such grandchildren, so I asked him point blank what he had done to earn his good fortune.

"I explained to him that we Jews believe that there are consequences to what we do, and the reward system in life is measured very carefully. He looked at me and pondered the question.

"He answered, 'I can't think of anything outstanding, but once, in Frankfurt,' he said, 'when we were rounding up the Jews, I had the chance to save the lives of three Jewish boys who were hiding in a Catholic orphanage. For some reason they aroused my sympathy. I was touched by their plight; they were so lost and forlorn I felt pity for them, so I let them flee. I don't know what happened to them. But I didn't kill them.'

"I thought his answer over and told him that according to our tradition his answer made sense. 'You know, papa, if you had let four boys go, you would have had four grandchildren.'"

Climbing the Mountain: Essay and Interview with Kirk Douglas

Surviving My Near Fatal Marriage
Why My Iranian Mother Didn’t Want Me to Become a Religious Fanatic
The Jewish History of Prague
Why the Sexual Revolution was Bad for Women
Comments
MOST POPULAR IN Spirituality
Our privacy policy
Aish.com Is Looking for Great Writers