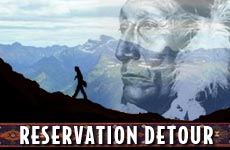 A dramatic route to self-discovery includes a detour at Indian reservations in South Dakota.

In the 1960's a young Jewish boy, Ben Richards*, grew up in the Canarsie section of Brooklyn, hating city life. Ben was a voracious reader of books on nature who dreamed of living on a farm where he could witness the seasonal flowering of the earth, nourished by life-giving rains, the warming sun, and the freshness of daily dew. Ben yearned for the music of songbirds, the evening chatter of crickets, and the tranquility of sheep grazing in the meadows.

To Ben, life meant the rebirth of spring bursting forth along acres of land, transforming into brilliant oranges, browns, and reds, and finally shedding its vibrancy for the silent sleep of winter as land and trees became blanketed with snow. Ralph and Nostrand Avenues in Canarsie weren't doing it for him. The fumes of the buses, the carbon copy homes, the endless rows of stores... Ben had to leave city life.

While at the reservation, Ben enrolled in the local university where he majored in wildlife biology. Ben's primary teacher on the reservation was an old man named Whitecalf. Ben stayed at Blackfeet for a while and then joined another reservation in nearby South Dakota.

Eventually Ben became accepted as an equal. For years Ben tilled the soil, ate his own produce, and worked alongside his adopted family members. Ben knew their culture, understood their language, and respected their traditions. Ben participated in pow wows and dressed in traditional Indian garb.

In his constant quest for truth and the meaning of life, Ben learned that in the higher elevation of Ogallala, South Dakota, there was a woman on a small reservation of the Sioux Indians who had legendary foresight and insight. To reach her would entail travelling across prairies and over hills, where there were no roads and no signs. But whatever it would take, Ben had to hear her wisdom.

Ben traveled alone for two days. He was not sure he was heading in the right direction. Late one afternoon he could see the outlines of a small camp in the distance. There were people up ahead and he hoped the sagacious woman was there.

Ben trekked toward that outpost, and was told by an old sun-baked shepherd that he had reached his destination. The woman, Elva Onefeather, lived with her children in a 12-foot-square tarpaper shack. Ben stayed in the area for two weeks and attended ceremonies and celebrations.

You can never be like us, she said. You don't belong here.

Finally, Ben approached the wise woman and asked about her Native American heritage. Elva Onefeather refused to answer Ben. "You are not one of us,” she said. "You can never be like us, you don't belong here.”

"But I have lived on reservations for years. I know your culture, I practice your customs, and I feel part of...”

Elva Onefeather interrupted him. "If you were Christian, I could understand. But you are a student of the Holy White Rock Man,” whom she referred to as the "Wah-Kinyan-Sapa.” Ben assumed that Wise Woman Onefeather was referring to Moses.

(Years later, Ben understood that the "holy rock" was a reference to God’s message to Moses: "When My Glory passes by, I shall place you in the cleft of the rock" - Exodus 33:22.)

"You are not one of us,” Elva Onefeather admonished Ben. "Go back to your roots. That's where you belong.”

Ben was dumbfounded. He was being rejected. After all the time and effort he had invested in this lifestyle, he was being labeled, by a revered personality no less, as an outcast. Was he now to go back to city life? Jewish life? To the life Ben had run away from?

The rejection hurt Ben but it made him rethink his world.

Within days, Ben packed his 1952 Chevy pickup truck and together with his dog, Chika, began his long journey eastward. He made his way to Brooklyn and began asking old acquaintances for names of people or organizations who might give him guidance. He was given a list of names and consulted each of them.

Ben came away from his visits feeling that the people he had spoken to either lacked authenticity, were self-promoting, or were narrow-minded. None shared his global vision. There was one name left on his list. If it didn't work out, he would go back west. The name was Rabbi Shlomo Freifeld, the head of Yeshiva Sh'or Yoshuv in Far Rockaway, New York.

Ben drove out to Far Rockaway in his pickup truck. He parked on Central Avenue in front of the yeshiva and tucked his long ponytail under the back of his shirt. His dog Chika sat in the bed of the truck, panting patiently for his master to return. Ben walked into the yeshiva and asked to see Rabbi Freifeld.

When the rabbi’s words were soft, they penetrated the hearts of the cynical and the skeptical.

Ben was taken aback by Rabbi Freifeld's queries. The rabbi wanted to know how to catch deer, and how to determine the freshness of elk tracks. These were the last topics Ben ever thought he would be discussing with a rabbi. They discussed many topics ranging from plant life to human life. Before Ben left, Rabbi Freifeld asked, "Why are you hiding your hair in your shirt? Your hair is so beautiful!"

Ben left the office mesmerized. He wanted to come back. He needed to know this man -- or maybe more importantly, he needed this man to know him. During the next few weeks Ben and Rabbi Freifeld spoke for hours on end. They would usually speak in his office, which was bejeweled with thousands of books on all aspects of Torah.

One afternoon, as they conversed in the office, someone came in and told Rabbi Freifeld he was needed in the study hall. Rabbi Freifeld excused himself and told Ben he would be back in a few moments.

Being alone in the office, Ben got up from his chair and began walking around, gazing at the overflowing bookcases. He walked near where Rabbi Freifeld had been sitting and noticed something unusual in the kneehole of the desk. There was a pile of books, and he bent down to look at them. To his amazement, the books were about Native American culture and reservations!

"It was then,” says Ben, "that I realized how much the rabbi really loved me.”

Rabbi Freifeld was studying these books so he could understand where Ben was coming from. By taking the time to "understand" and not merely to be understood, Rabbi Freifeld validated Ben's concerns and quest for meaning in life. Ben studied at Sh'or Yoshuv Yeshiva for years, where he further developed his mind and character through the study of Torah.

Today, Ben lives in a Torah community in Upstate New York, where he earns his living through raising chickens, cows, and sheep in a natural and organic manner -- all in the spirit of Torah teachings.

Yosef Ben Shlomo Hakohen, who sent us the above story, is the director of the email study-program, "Hazon - Our Universal Vision". He first heard this story from Rabbi Avraham Mordechai Freifeld, the son of Rabbi Shlomo Freifeld, z"tl. He also read this story in a newly published book of fascinating and uplifting true stories, "Reflections of the Maggid" by Rabbi Paysach J. Krohn. He included excerpts from this book with permission of the copyright holders, ArtScroll/Mesorah Publications, Ltd:

The Chain of Life

The Day My Brother Died

My History, Validated
It Takes A Lot Of Faith To Be An Atheist
How Instagram Brought Back This Nostalgic Soup
What Makes Eli Run?
Comments
MOST POPULAR IN Spirituality
Our privacy policy