In the Big Inning 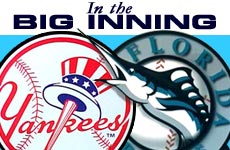 The Florida Marlins were so much fun to watch because something came from nothing.

The two Florida Marlins games I attended epitomize the highs and lows of this year's World Series Champions. The second game I went to was the final home game of the season -- Game 5 of the World Series where Florida beat the Yankees 6 to 4 in front of 66,000 screaming, frenzied fans.

The other game that I attended was a vastly different experience.

Toward the end of May, the Florida Marlins were sitting in the basement of their division, a dismal ten games below .500, and generating minimal interest in South Florida. Their game against the Montreal Expos was rained out by one of the worst rainstorms in an area known for its tropical storms. Ten inches of rain came pouring down in a matter of just a few hours.

Here was a professional sport being played in a stadium with 66,000 seats, and there was virtually nobody there. There were more people playing the game than watching it.

The next day there were again many dark rain clouds in the sky, but the make-up double-header with the Expos began at 5:30 anyway. I came home around that time to find my son, Moishy, ever the sports nut, watching the game on TV. I glanced at the game and saw a sight I have never seen before in my life. Here was a professional sport being played in a stadium with 66,000 seats, and there was virtually nobody there. I mean nobody, not a cluster of hundreds here and there -- but dots of one or two people scattered about the cavernous stadium. There were more people playing the game than watching it.

I know a historical moment when I see it, and I wanted to be part of that non-event. So on the spur of the moment I said to Moishy, "Let's go."

We grabbed some grub, Moishy quickly donned his Marlins cap and glove, and we headed down the Florida Turnpike. Unlike Game 5 of the World Series, there were no traffic delays getting into Pro Player Stadium, and we got a prime parking spot as well. Approaching the ticket booth a young man came up to me offering field level tickets at first base, face value $50, for $30. I told him I would give him $20. Sold.

Two great seats to a baseball game -- $20; feeling of satisfaction of saving $30 -- Priceless.

We walk in and the usher is thrilled to see us. "Sit wherever you want," he tells us. We head down to Row 1. Moishy got, not one, but two game balls flipped to him by players at the end of the innings. Everyone in our row got a ball. It was foul ball night and everyone was a winner -- another first for Major League Baseball. The place was so empty that if you wanted to express your feelings about a particular player, you could and he would hear you. They asked fans to turn off their cell phones as to not disturb the players. No, I am making that last part up.

Little did we know it at the time, but one of the most remarkable turnarounds in all of sports had just begun.

We stayed for the end of the first game and the beginning of the second. The Marlins ended up winning both, and little did we know it at the time, but one of the most remarkable turnarounds in all of sports had just begun.

And now here we were, five months later, and the Marlins finished the season 20 games over .500, knocked off the Western Division leading San Francisco Giants in four games, dismissed the lovable losing Cubs in a stunning come from behind (3-1) seven-game thriller, and were now in the process of toppling the historical, powerful New York Yankees. And there I was, sitting in right field, row 22 in a very different stadium than the one I was in at the end of May.

Anyone who had followed this series could not help but become enchanted by the Cinderella story that ensued. A 72 year old manager -- the oldest ever to manage a team -- was schlepped out of retirement to manage the team midseason. 20-year-old kids were pulled out of the minor leagues and became poised athletes in front of millions. Josh Beckett, who finished the season with a mediocre 9-8 win loss record, somehow transformed into the most dominating pitcher of the series, outshining stars such as Roger Clemens and Andy Pettitte.

This is why the World Series was so much fun to witness. Nobody expected this team to do anything. It was a bunch of no names (with the exception of one star player, Pudge Rodriguez) that came out of nowhere, when no one was looking, stuck together, believed in each other and kept winning.

When God created the Universe he created it "yesh mei'ayin" -- something from nothing. Although we have no idea what "nothing" really is since we live in a world of something, there is still a lesson we can learn about this process.

The creation of the universe came about in an extraordinary fashion. One of the first prayers we recite every morning is "Blessed is He who spoke and the world came into being." Everything we see exists because God wills its existence. As such, everything in creation is a total and constant gift from God. Everything we have, touch and see -- the entire universe -- is here only because He wills it to be here. With God, it is a one-way street. He gives us everything, and there is nothing we can really give back to Him.

Anything that reflects the idea of "something from nothing" is an expression of God's first act of creation. As such, one of the greatest pleasures people experience is when something good happens that was totally unexpected and unforeseen. The birth of a baby is a miracle that brings tears of joy despite its frequency because we experience the creation of the most precious thing, life itself, from virtually nothing.

Expect nothing and enjoy, or expect everything and forever be unhappy.

Whereas wonderful pleasure comes from the unexpected, the greatest disappointment occurs when there is the expectation and insistence that something ought to be. The more we expect, the less we enjoy. The more we think that things must and should be a certain way, the more we set ourselves up for frustration, disappointment and pain.

This is how God made the universe and it is a basic rule of life. Expect nothing and enjoy, or expect everything and forever be unhappy. "Something from nothing" is God-like; "nothing from something I expect should be" is Hell.

The Yankees failed because they were the epitome of expectation, of "we have this coming to us; it is our right." Those poor Yankees, who spent 180 million dollars on star players of all sorts to secure themselves the championship they felt was their entitlement, were left with nothing. Truth be told, they were in a no-win situation from the start. They had only one option, and that was to win, anything else was failure. Even afterwards outfielder Bernie Williams still claimed the Yankees to be the better team. They could not come to grips with the sad reality of the corner they had painted themselves into.

The Marlins were so much fun to watch because something came from nothing. They were losers with nothing going for them; not money, not interest, not fans, not star players -- nothing. They were just a bunch of hard working guys playing in a stadium surrounded by empty seats of indifference. But despite this, they still had an elderly leader who cared; who spent the time and patience to educate a young group of talented men to believe in themselves and each other. And with this, they emerged victorious.

Take a lesson from the Florida Marlins. Expect nothing, try your best, make yourself part of a humble group of people that turn to each other, and realize that everything is a gift from the Almighty anyway. When we do this, the joy of World Series Championships awaits us.

See you in April!