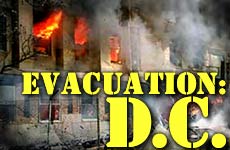 The chronology of a chaotic day, working down the street from the White House, and living near the Pentagon.

The tears have not yet dried. We are caught in that abyss between death and burial. We are not yet ready for consolation. We are just trying to cope, save lives, save sanity and endure the unfolding of details that reinforce horror and grief. Hope is waiting around an undesignated corner, lurking in a future only faith will bring.

The smoke has yet to clear. It billows into the sky, distinctive and ominous in its brown overtones, gently rolling into white and fading into nonchalance. It started a day of perfect beauty, light fresh winds and azure blue skies. It was like a porcelain mirage cracking.

As soon as I arrived at my office four blocks from the White House, the news began to unfold. We tuned in the radio, then set up an old TV and my office mates and I saw the visual catastrophe unfold, breaking down in turns as we received and made calls learning who worked where, who was where, and who was no where. It was a sudden exodus.

Fears that that White House was under attack were being voiced by newscasters. A fictitious plane had been reported shot down as it headed toward the White House lawn. The office cleared as each person dashed for a way home. The urban legends, fueled by erroneous news reports were escalating. We all left avoiding the Metro, fearful of threats of chemical attacks on the evacuating masses. Only four miles from home, ready to foot it, I threw on my backpack, weak from the emotions and desperately needing fresh air. I needed to walk. At least it was doing something.

Four miles from home, ready to foot it, I threw on my backpack, weak from the emotions and desperately needing fresh air.

It felt good to walk and comforting somehow to be in the crowds of people in exodus together. The cars were already bumper-to-bumper and it was not yet 10:30 a.m. The news was still new.

It wasn't like Hollywood. The faces weren't telling a single story line. There was shock, there were tears, there was laughter. People high on the excitement of the moment, not yet realizing the magnitude of the loss, not yet realizing the moment was only right for mourning. And there were cell phones. I heard a hundred conversations of concern and business and sadness and relief in my first mile. It would have been a day of spring fever beauty and the contrast was odd. The shops were closing down on every corner and the coffee I so desperately needed after my second mile was unattainable. And yet there were still casual shoppers, filling bags, standing in line for ice cream and pizza.

I tried to find a pay phone to call Brendan and let him know where to pick me up after I cleared the Potomac river and made it to Virginia where the traffic would be lighter, and he could save me from the last mile up a steep hill. The pay phones on the street had long lines or were broken. Instinctively I headed to the synagogue and banged on the office door, hoping for company and a place to pray, but our secretary, who lives only blocks away, had already retreated. I continued home.

Without realizing, I was drawn to a TV in the window of a bar, just opening for lunch crowds. A group of us stood silent, so silent as the planes tore through the buildings over and over again and the people ran in fear and ash. We just stood. Finally I broke away, used their phone, and wandered into the street. Groups were congregating around parked cars listening to blasting radios. The sounds seduced you, and I kept pausing, needing to hear more, just needing to know.

Another TV stop punctuated my trip. It was mesmerizing. Not yet realizing that much of the reports would later be retracted as details were clarified. The smell of smoke was drifting into the streets. Emergency vehicles were roaring by, the only break in the bumper-to-bumper traffic. Police were everywhere. The fear. The fear. What would be next? Was it still happening? Were they finished?

The fear. What would be next? Was it still happening? Were they finished?

As we walked, we talked to one another. Each gave the other news, a car bomb blown up at the State Department. Four planes still unaccounted for and who knew their targets. All of America shut down. The stores kept closing, people kept walking. The state of emergency was declared in the tri-state area of DC, Virginia, Maryland. Highways closed, all of the monuments, museums, government offices evacuated. Everyone walking.

I made it to the bridge, and as I crossed I had full view of the burning Pentagon. I kept thinking of Howard who worked there. How many? Howard, Adam, Rob, Jon, Sarah, who else?? I was drawn to a couple, evacuating themselves from their home downtown, two dogs in tow. I had to cuddle their puppy, a small comfort, a reassurance. As I waited with them for our rides, person after person came over for the same furry relief.

As Brendan and I started home, I felt bad for the hoards of people heading up the steep hill in the now blazing heat. I wanted to give them all a ride. We settled on one poor man on crutches who had already walked three or four miles. Getting him home was a challenge. Every intersection in our neighborhood had blockades and diversions. The police were maintaining access for emergency vehicles and I live between the Pentagon and Arlington Hospital, the neighborhood where our rider lived. It took an hour to get the last three miles to his home.

We finally reached our home, tired, hungry. But phone calls came first. The long unbearable delays, most cell phone service was down. We had trouble getting dial tones on the land lines, everyone's line was busy. They were begging us not to use the phone lines to leave them clear for emergency calls. But how could we? It was the lifeline of us all. We had to make calls.

I was getting calls from friends: Was Howard okay? Was he? Finally, yes. He was on the other side of the building, evacuated immediately and at home, but none of us could reach him. His car however, was still hostage.

Adam had been in the exchange in the lower part of the World Trade Center, he called his mom to say he was okay. But that was minutes after the impact occurred, and then it was silence for hours, before she finally got an e-mail that he was okay. No one can reach anyone in New York. Much later in the day I heard my cousin had walked across the Brooklyn Bridge. My other cousin had been far from the attack.

He called to say he was okay, but that was minutes after the impact occurred, and then it was silence for hours.

I went to give blood, far in the opposite direction of the catastrophe. They diverted my car, telling me that the wait was 4-6 hours. Everyone had come out, everyone wanted to do something, however little. I stopped at a nursery, one of the few businesses open, and bought huge pots of asters in vivid colors. I wanted life. I went home and planted them immediately. The images were too much. We couldn't leave the TV, but we couldn't watch, either. We didn't know which was harder. The wound is open, festering.

A phone chain sent messages out. As church services throughout town were cancelled, our synagogue organized a prayer service to say Psalms together and pray. I couldn't drive. I felt weak and disoriented. Shim, a doctor, had the cool to take the wheel. The streets were empty. The smoke still billowing into the now dark sky. Just the police lingering at intersections, but as we crossed into DC it was different. The camouflage humvees were on every corner topped by national guardsmen. A few pedestrians, no cars in sight. It was Nairobi ‘98 again. I started having flashbacks and I felt like I couldn't breath. Another war zone.

The camouflage humvees were on every corner topped by national guardsmen.

At synagogue it was like Tisha B’Av. We couldn't say hello to one another. There was no chit chat. Few smiles. The Psalms brought tears to our eyes as we felt every word, as suddenly new meaning sprouted out of the familiar stanzas. Our rabbi spoke eloquently. He didn't try to comfort us, that is for later. Just cope. As he said: Today the world changed. It changed. What happens next we don't know, but nothing is the same as before, that is for sure. News of the deaths of friends and relatives were now surfacing. A former congregant had flown in from his new home in Australia the day before, to leave this afternoon to London. He was now among us indefinitely. All flights cancelled.

I am home now. Sick to death of watching reports seeing awful things. Half of DC will be shut down tomorrow -- schools, universities, state courts. But I will have to go to work. Somehow we will have to pretend to go on. Pretend normalcy, pretend like we care about the humdrum duties of the workplace. Pretend we aren't anxiously listening to the casualty reports. Pretend that our hearts aren’t broken.

The Aish.com family mourns for those lost and prays for the recovery of the injured. We are in a state of utter shock and disbelief. May the Almighty remove our sorrow and shield us from further pain.