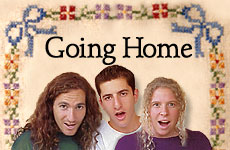 "I always considered myself to be pretty independent. So why, in the back of my mind, was I dreading the inevitable return home with a strange new kippah sitting on my head?"

I was returning to my old hometown for a wedding of childhood friends, ready to deal with the onslaught of questions about my time away, my future plans and, of course, the strange new yarmulke sitting on my head.

I had spent the last two years in Israel, and being Jewish had a completely different meaning for me now.

I had grown up in "Jewish suburbia" and though my upbringing had endowed me with a Jewish identity, what that meant beyond going to Hebrew school until my bar-mitzvah and observing different, "our own," holidays from my non-Jewish friends, was not so clear to me.

My hometown, in the suburbs of Chicago, was a place filled with warmth and stability; that is, I was surrounded by the same family friends who have been there through all the various stages of my growing up. Most of these families happened to be Jewish, although their connection to Judaism was much more cultural and social, rather than religious. My "religious" exposure was mainly my grandmother's phone calls every Saturday night after Shabbat asking me if I had yet found a Jewish girlfriend. After my Bar Mitzvah, I was done with my Jewish education, having exhausted any limited interest I had to begin with.

After my Bar Mitzvah, I was done with Judaism, having exhausted any limited interest I had to begin with.

In Israel, I learned that I had thousands of years of family history behind me, and I was exposed to ideas that spoke to me in a deep and meaningful way. I learned that Judaism was not only concerned with making the world a better place to live, but it taught that it was my responsibility to do so. I found this tradition of mine, which I previously thought somewhat empty and irrelevant, to be dealing with the spiritual, moral and personal issues necessary for my growth in life. On the one hand, I was inspired and challenged, but on the other hand, the specter of change -- which would be necessary if I were to live these ideas -- was frightening to me.

I always considered myself to be pretty independent -- I picked up and left after college with just a backpack and a few dollars. Yet, as I became more observant in my Judaism, I dreaded in the back of my mind the inevitable return home to meet up with my past.

On the plane, my head -- with yarmulke in place -- was flooded with self-doubts. What's everyone going to think of me? Will they think I went off the deep end? I'm going to stick out like a sore thumb! I wanted to go to the wedding, but I also wanted to avoid all these people!

As I opened the doors to the wedding hall, I felt like I somehow forgot all my clothes and was walking in stark naked. I felt as if every person I saw was staring at me in wonderment. The first person I started talking to was an old friend from high school who I hadn't seen in years. We shmoozed and filled each other in on what the last few years had brought our way. I was relieved to discover that it actually wasn't so uncomfortable. I began to calm down and enjoy myself, when the first question finally came.

I was talking to another old neighborhood friend who was continually looking upwards at my head, noticing that I was -- for some reason -- wearing a kippah, even though we were nowhere near a synagogue.

"Do you wear that kippah all the time?" he asked.

"Even when you're not in temple? Why?" he asked in a challenging tone.

Should I explain to him my entire story of the last two years? Impossible. Maybe I should just brush it off with a joke?

"Well, I've had some amazing Jewish experiences during the last couple of years, and I've come to think it's pretty important to be Jewish. It actually means a little more than what we learned in Hebrew school as kids." He laughed remembering how he hated Hebrew school as much as I did.

"Don't you think it makes you stick out too much? Someone can be Jewish and not have to tell everyone about it, you know."

Sweat started forming on my forehead. Stay calm, I told myself, you know what you're doing.

Sweat started forming on my forehead. Stay calm, I told myself, you know what you're doing.

"You're right. It does make me stick out a little bit, and truthfully, it even makes me feel a little uncomfortable since I'm around all these people who haven't seen me wearing it before. But even more important than all of this is that I need to live consistently with what I believe and feel. Being Jewish has become an essential part of who I am, and I don't want to hide that."

"That's amazing that you've found something that you feel is so meaningful and worth living with," he answered in the end.

Relief. I had actually made sense.

It finally was time to sit down to dinner. I was sitting with two good friends from my hometown, and a table full of new acquaintances. I tried to discreetly pass on the appetizers and the soup, explaining I wasn't so hungry. I figured there was no reason to mention that I now kept kosher and make a scene.

As the main dishes were being served, the waiter announced to the table, "There's someone here with a kosher meal, right?"

A second of silence. The sweat returned and I wanted to disappear. There was no getting out of this one. "Uh ... yeah, that would be me." Two minutes later another waiter asked the entire table, "Someone here has a kosher meal?" I motioned to myself. "It will be out in a second, sir."

I was ready to scream, "No, that's quite alright! You can just keep it back there! I'm really not hungry!"

After two more waiters and the hostess visiting the table within the next five minutes asking the same question, a waiter finally appeared with a giant aluminum pan. "Kosher meal?"

I glanced up and the entire table was staring in disbelief.

I glanced up and the entire table was staring in disbelief. I'm not sure if they were wondering why in the world I needed a kosher meal, or if they were staring at the massiveness of this container. The whole thing was sealed and wrapped so well that I couldn't get it open. The guy next to me started cutting at it with his knife. Finally we pried it open, and there I was, at this fancy, elegant wedding, with my tin-pan kosher meal with everyone looking at me.

A few minutes later my sense of embarrassment began to subside. Feeling a little uncomfortable being different and not totally fitting in was not such a big a deal, and it definitely felt good standing up to my own worries and doubts and doing what I felt was the right thing.

After the wedding I wondered about what was it that made me so nervous? Why did I care so much about what others would think of me?

THE COURAGE TO GO AGAINST THE TIDE

One of the first ideas I had come across when I began learning about Judaism is that being Jewish means having the courage to go against the tide. Abraham, the forefather of the Jewish people, was called ha'ivri (the "Hebrew"), which means literally "the one on the other side". Abraham was on the "other side" from the beliefs of his environment and community. While everyone around him believed in idols, Abraham knew that there was only one God who created the world. While this pressure must have been enormous, Abraham stood up for what he believed in, literally against the entire world.

As a Jew, Abraham's courage was a model to me.

As a Jew, that courage was a model for me. My nervousness showed me that the gap between intellectual understanding and actually living with this idea can be large at times. Going back home helped me narrow this gap by forcing me to examine my decisions and grow stronger in my convictions.

In the end, I realized that my family and close friends didn't really care about all the changes. Not caring doesn't mean they weren't interested in understanding, but it means that they had a caring for me that was beyond understanding.

Most importantly, I realized a lot about where my self-worth comes from. We all have a part of us that wants others to validate our decisions, a part that cares about what others think of us. But in the end, it's only me who has to live my own life. Standing up for what I believe in and to live life the way I think it should be lived is not an easy battle, but it is the true definition of freedom.

In the Shadow of Chernobyl, I Found Out I was Jewish at Age 16
The Connection between Israel and the Jewish People
Grit and Torah
Why We Can’t See True Reality
Comments
MOST POPULAR IN Spiritual Odysseys
Our privacy policy