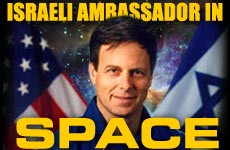 Col. Ilan Ramon will orbit the earth in search of Jewish unity. An exclusive interview with Aish.com.

He will be eating kosher food, and will carry symbols of the Holocaust and the State of Israel.

Ilan Ramon -- Israeli fighter pilot, child of Holocaust survivors, and father of four -- sees his voyage on Space Shuttle Columbia as much more than a science expedition. Ramon believes he is on a higher mission -- "as an ambassador representing all Jews and Israelis."

Ramon, who is not religiously observant, surprised the Jewish world by requesting kosher food for his 16-day flight scheduled to blast off on January 16.

NASA will provide him with dehydrated foil packets -- like kosher chicken and noodles -- made by an American company that services kosher travelers. "It's just as tasty as the other stuff," Ramon told Aish.com, "and this way I can show respect for Jewish tradition."

A key factor in Jewish unity is to show respect for the traditions that have carried us forward for millennia.

Ramon is intent on using his space mission to bridge some of the divide between religious and secular Israelis. His intuitive sense is that a key factor in Jewish unity is to show respect for the traditions that have carried us forward for millennia.

Ramon's step signifies an understanding that at the most public level, Torah tradition should be an integral part of Israeli life.

"We have to find a way to bring our people closer together, to show more patience and understanding," says Ramon. "I hope that my eating kosher will send a message of willingness to do so."

Ramon's space luggage also includes a tiny, wallet-sized Torah scroll that a boy in the Bergen-Belsen concentration camp received from the rabbi of Amsterdam -- on the day of his bar mitzvah 60 years ago. Ramon said that this scroll represents "the ability of the Jewish people to survive everything, including horrible periods, and go from the darkest days to days of hope and faith in the future."

Ramon, age 48, has been in Houston for four years, training for a mission that was originally scheduled for January 2000. It has been repeatedly delayed, most recently after tiny cracks were found in the shuttle's fuel pipes.

During the flight, Ramon and the crew will conduct intense, round-the-clock scientific research. Ramon will focus specifically on an experiment that photographs how dust storms from the Sahara Desert enter the earth's atmosphere. The experiment will provide key information on how this space dust affects global warming, and how it impacts an issue of particular interest to Israel -- rainfall.

Ramon was selected to represent Israel based on his air force training and science education. As a combat pilot, he fought in the 1973 Yom Kippur War, and in Lebanon in 1982, where he survived a collision and ejected from his fighter jet. Ramon was one of eight Israeli pilots who boldly bombed the Iraqi nuclear reactor in 1981.

History's "most traveled Jew" is David Wolf who has logged more than 80 million miles.

Though Ramon will fly as a guest of NASA, Israel boasts its own low-key space program. The Israel Space Agency has developed the Shavit ("comet" in Hebrew), a three-stage, solid-fuel rocket designed to carry heavy loads into orbit. Israel also developed the Ofeq spy satellite.

Ramon is the first Israeli, but not the first Jew to travel into space. Jeff Hoffman flew on the shuttle Columbia in 1996, and Judith Resnick died in the Challenger explosion in 1986.

The distinction of history's "most traveled Jew" goes to David Wolf of Indianapolis, who has already taken three trips into space. In 1997, he logged more than 80 million miles during a four-month stint on the Russian space station Mir.

In his ambassador role, Ramon has paid particular attention to the Holocaust. His mother spent 18 months in the Auschwitz concentration camp, and many of his relatives perished there.

On board the shuttle, Ramon will carry a piece of art from Yad Vashem -- a simple black-and-white drawing called "Moon Landscape." Created by Petr Ginz, a 14-year-old Czechoslovakian boy killed in Auschwitz, it depicts Petr as he imagined himself looking at Earth from the moon.

Ramon has also made a point of speaking to groups of Holocaust survivors. "The look in their eyes is very powerful," he says. "They see their hopes that had died in the Holocaust as living on through me. They see that despite the horrors we have endured, we are going forward."

Ramon's mission has raised other interesting Jewish questions. Lighting Shabbat candles in space is not possible, but Ramon hopes to recite the Kiddush prayer, albeit from a pouch of grape juice. (It is unfeasible to drink from a glass in a gravity-free environment.)

The question remains, however, when to recite Kiddush.

Should Ramon count a new 'day' every 90 minutes?

On earth, Shabbat occurs every seventh day. But while traveling at 18,000 miles an hour, Ramon will see a new sunset every time he orbits the earth -- every 90 minutes. Does that mean Ramon should designate Shabbat with every seventh "sunset" -- i.e. every seventh orbit?

Rabbinic scholars have determined that Ramon should mark Shabbat according to the local time in Cape Canaveral, Florida -- his point of departure from Earth.

Another issue arose regarding Israeli elections; Ramon will still be in space on election day January 28, and as an “ambassador” he is entitled to vote while abroad. But the current law requires submitting a written ballot not more than 12 days before the election, and Ramon was in isolation during that time. A court ruling will allow Ramon to cast his vote from space.

Whatever the case, Ramon is ready to blast off into space. And what does he most eagerly anticipate? "Looking out the window at a heavenly view of Israel and Jerusalem."

An Interview with Norman Lear

The Jewish Ethicist - Pay Day
Olivia Newton John’s Grandfather was a Nobel-Prize Winning Jewish Physicist
Don’t Believe in Other Gods Versus God is One
Seeing Without Eyes
Comments
MOST POPULAR IN Current Issues
Our privacy policy
Aish.com Is Looking for Great Writers