Path of the Soul #2: How Much Space Do You Take? 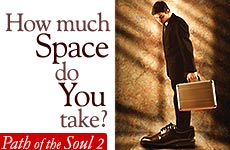 Being humble doesn't mean being nobody, it just means being no more of a somebody than you ought to be.

Your interior world is the realm of soul, and the soul-traits that are turned up too high or too low define your spiritual curriculum. But where to start? Rabbi Bahya ibn Paquda wrote the classic Mussar text The Duties of the Heart (in Hebrew Hovot ha-levavot) in Spain in 1080. He helps direct our attention by posing a question: on what do the virtues depend?

His answer is clear: "All virtues and duties are dependent on humility." This is a principle all later Mussar teachers have endorsed -- the first leg of the spiritual life involves the cultivation of humility -- called anivut or shiflut in Hebrew.

Unfortunately, "humility" sounds so much like "humiliation" that it's easy to get a very wrong impression of this soul-trait. In the traditional Jewish understanding, humility has nothing to do with being the lowest, most debased, shrinking creature on earth. Rav Kook says it well:

Humility is associated with spiritual perfection. When humility effects depression it is defective; when it is genuine it inspires joy, courage and inner dignity.

Mussar teaches that real humility is always associated with healthy self-esteem. Lack of self-esteem leads to unholy and false feelings of worthlessness.

Being humble doesn't mean being nobody, it just means being no more of a somebody than you ought to be. After all, Moses, who is considered the greatest of the prophets, is described in the Torah as "very anav [humble], more than any other men who were upon the face of the earth" (Numbers 12:3).

If a leader as great as Moses was so humble then there is surely more to humility than the shrinking meekness we ordinarily associate with the term.

Too little humility -- what we'd call arrogance or conceit -- is easily seen as a spiritual impediment, but the opposite is also true. Too much humility also throws a veil across the inner light of the soul. The rabbis in the Talmud make this point very forcefully through the following story. The passage in the Talmud begins: "The anivut [humility] of Rabbi Zechariah son of Avkulas caused the destruction of the Temple in Jerusalem" (Gittin 55b-56a). This was a cataclysmic event in Jewish history that is still mourned today. How could a virtue like humility cause so terrible a catastrophe?

To understand, we have to enter the story a little earlier, when a man named Bar Kamtza sought revenge on the Jewish leaders of Jerusalem by going to the Romans to claim that the Jews were rebelling. To prove his point, he told the Roman leadership to send a sacrifice to the Temple. Normally such a sacrifice would be offered up, but Bar Kamtza caused a minor blemish on the animal that was unnoticeable to the Romans but which he knew the rabbis would see, and as a result of which they would be bound to refuse to accept the offering. This refusal would be "proof" that the Jews were in rebellion against Rome.

When the sacrifice came before the rabbis in the Temple, they noticed the hidden blemish, and they understood immediately what was going on. One suggested that they offer the sacrifice anyway. Zechariah ben Avkulas, however, argued that if they did that, people would draw the incorrect conclusion that it was permitted to offer blemished sacrifices.

The rabbis then suggested that Bar Kamtza be killed to prevent him from telling the Romans and endangering the Jewish people. Rabbi Zechariah ben Avkulas responded saying, "If we do so, people will incorerctly think that those who inflict blemishes on sacrifices are put to death."

As a result of the priest's unwillingness to accept either course of action, Bar Kamtza succeeded in his plan. The sacrifice was denied, and as Bar Kamtza had planned, the Romans assumed the Jews to be in rebellion. The Romans attacked and ultimately destroyed the Temple. The Talmud concludes, "the anivut of Zechariah ben Avkulas caused the loss of our home, the burning of our sanctuary, and our exile from the land."

There is no understanding this statement if anivut meant humility as we usually understand the term. What can we learn of the Jewish concept of humility from the story of Zechariah ben Avkulas?

Zechariah ben Avkulas showed humility because he did not act with presumption -- either by offering a blemished animal that contravened the rules, or by condoning murder -- but he actually manifested too much humility, because he shrank from the task he had been handed. He held the fate of the Temple and his people in his hands, yet he seems to say, "Who am I to make such unprecedented decisions that will potentially mislead the people as to the law?" This was his excessive humility. His sense of himself was flawed because he saw himself as less capable of solving a real-life dilemma of great consequence than he actually was.

To clarify the picture even more, let's add for consideration another enigmatic reflection on humility from the Talmud where it says: "Anyone who sets a particular place for himself to pray in the synagogue, the God of Abraham stands in his aid, and when he dies, people say of him, 'this was a humble person'" (Brachot 6b).

Humility is limiting oneself to an appropriate amount of space while leaving room for others.

Where is the humility in sitting in the same place in the synagogue whenever you come to pray? The answer is that by fixing yourself to one spot, you thereby free up all the other space for others to use.

This example helps us frame a Jewish definition of humiliy as "limiting oneself to an appropriate amount of space while leaving room for others." Sitting in a predictable place, you make room for others to occupy their own spaces too. Zechariah ben Avkulas gave up too much of his "space," considering that the space a person can occupy can be physical, emotional, verbal, or even metaphorical.

This definition also fits Maimonides' concept that humility is not the opposite of conceit, which would be self-effacement, but rather stands between conceit and self-effacement. Humility is not an extreme quality, but a balanced, moderate, accurate understanding of yourself that you act on in your life. That's why humility and self-esteem go hand-in-hand.

When you understand humility in terms of the space you occupy, it's important to clarify that we are not all meant to occupy the same amount of space. Some people appropriately occupy a lot of space, as would be the case with a leader -- think of Moses again. But if a leader laid claim to even more space than was appropriate, they would be a Pharaoh. And we have already learned from the case of Zechariah ben Avkulas that for a leader to shrink from his responsibilities -- to take up less space than appropriate -- can have disastrous consequences.

Humility is the first soul-trait to work on because it entails an unvarnished and honest assessment of your strengths and weaknesses.

At the other end, it may be entirely appropriate for a more solitary person to occupy less than an average volume of space. Were a person of this nature to force themselves to speak up more, be more outgoing, etc., -- in other words, to fill more space -- the consequences could be negative at the level of soul. Nor would they be serving the soul to withdraw themselves even further from what is already suitable to them.

All Mussar teachers stress that anivut is the first soul-trait to work on because humility entails an unvarnished and honest assessment of your strengths and weaknesses. Without this accurate self-awareness, nothing else in your inner life will come into focus in its true measure -- and it is not accidental that the Hebrew word for soul-traits, which is middah (pl. middot), literally does mean "measure." Without humility, either you will be so puffed up with arrogance that you won't even see what is really needing some work, or you will be so deflated and lacking in self-esteem that you will despair of being able to make the changes that are lit up so glaringly in your self-critical mind.

Is humility a soul-trait you need to work at? The questions to ask yourself are these: do you leave enough space in your life for others, or are you jamming up your world with your self? Or is there space you rightfully ought to occupy that you need to stretch into? Your answers are the measure of your humility.

We began with the teaching of Rabbi Bahya ibn Pakuda that humility is the root of all the other virtues. Most of us need help to become appropriately humble and Bahya provides a tool to help us work on that crucial soul-trait. He offers a group of contemplations that are designed to help develop humility. There are formal ways to do these sorts of contemplations but it is enough for you just to spend a few moments thinking on each one of them long and hard enough to make some impression. You'll know that you contemplated them deeply enough when thoughts along these lines pop into your head at unexpected moments during your day.

Take a few moments to focus our thoughts and imagination on the following subjects:

"When a person's thoughts are never free of one of these points," ibn Pakuda concludes, "he will be humble and uninflated at all times, until humility becomes second nature to him and inseparable from him."

Path of the Soul #1: Discovering Mussar

Path of the Soul #3: Gratitude

Path of the Soul #6: Giving from the Heart

Path of the Soul #7: Loving Kindness

Path of the Soul #5: Giving Honor
Faith: the Axis Upon Which the Wheel of Science Turns
Love - Not Just About Chemicals Anymore!
Is There a Moral Code in a Virtual World?
Comments
MOST POPULAR IN Spirituality
Our privacy policy