Everything I Know About Leadership I Learned From Moses 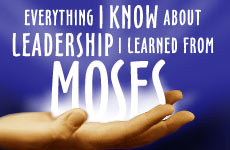 Are you willing to stand up, look everyone in the eye, and say, "I'll make it happen"?

Hollywood did us a big favor. It ensured that everyone knows the name of the most famous leader in Jewish history. Jews and non-Jews the world over recognize that Moses was the man who led the Jewish people out of slavery into freedom.

What the movies don't show, however, are Moses' qualities that made him ly suited to this role. These are characteristics inherent in everyone that, if nurtured and nourished, can help us actualize our personal leadership potential. This power lies dormant in every human being waiting for us to capitalize on it and bring its promise to fruition.

To fully understand the requirements of leadership, as exemplified by Moses, we need to briefly step back in time.

LIFE IN THE PALACE

Moses was raised in the palace. He had wealth and power. He had every material comfort imaginable. In Egyptian culture, Moses had it made. So what did he do?

Moses ... went out to his brethren and observed their burdens and he saw an Egyptian man striking a Hebrew man, of his brethren. He turned this way and that and saw there was no man, so he struck down the Egyptian and hid him in the sand.

In these ancient words lie the secret to modern leadership.

SECRETS OF A LEADER

Pragmatism is certainly a crucial component of leadership. But beyond the superficial reading of the text lies a more profound idea: Welcome the opportunity to take responsibility.

In "Ethics of our Fathers" it says: "In the place where there is no man, strive to be a man."

Seth Godin writes in Fast Company that what holds up some companies' ability to change is "the absence of someone who is willing to stand up, look everyone in the eye, and say 'I'll make it happen.'"

Moses was that person. He wasn't perfect, he wasn't experienced, he stuttered when he spoke. But when he saw his people were in trouble, when he saw a job that needed to be done, he acted. He took responsibility, even at risk to his own life. Therefore the Almighty chose him to lead. It wasn't magical or supernatural. You don't have to have the charisma of a JFK or even a Bill Clinton. You just have to choose.

We demonstrate to ourselves, our partners, our children, our friends, our colleagues, our community what is important to us by our actions. It's up to us. We can actualize that latent potential. Think about it. What are you willing to risk? What are the crucial jobs that need to be done? Don't wait. Carpe diem.

The Jewish Ethicist: Not All's Fair in War - Part 2

The Jewish Ethicist: Owner, Not Ruler

The Jewish Ethicist - Google Gossip
Faith: the Axis Upon Which the Wheel of Science Turns
Love - Not Just About Chemicals Anymore!
Is There a Moral Code in a Virtual World?
Comments
MOST POPULAR IN Current Issues
Our privacy policy