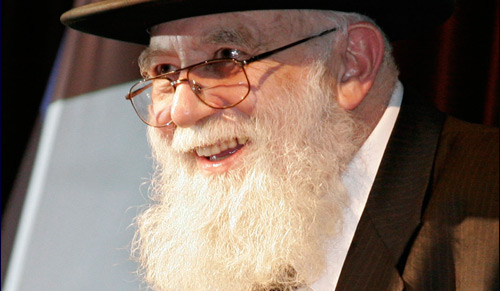 Insights into fixing oneself and fixing the world.

Rabbi Noah Weinberg was a once-in-a-generation giant who deeply impacted thousands of people around the world, teaching what it means to be a human being and a Jew.

Here are five key lessons I learned during 20 years as his student.

Rabbi Weinberg always said: “When I’m gone, then you’ll grow up.” (He was told this by his own teacher, older brother Rabbi Yaakov Weinberg zt”l.) This message was that we’d been relying too much on him to get the job done; after his passing we would “grow up” – i.e. take responsibility and step up into the role of a leader.

Rabbi Weinberg made the story of Moses a constant refrain: “In the place where there is no man, be a man!” (see Exodus 2:12, Avot 2:5). By accepting responsibility to further the Almighty’s plan, we merit the Divine assistance to get the job done.

Rabbi Weinberg always spoke about how, prior to starting Aish HaTorah in 1974, he had many failed attempts to build a successful organization. He would quote the verse, “A tzaddik falls seven times and gets up” (Proverbs 24:16), and say that the key to becoming successful is precisely the act of falling and getting back up.

When Rabbi Weinberg failed, he would always engage in a rigorous process of self-evaluation, then make any readjustment to accord with God’s will. With deep belief, he would say: “The Almighty can do anything. We just need to want it badly enough.”

The Talmud says: “Who is powerful? He who empowers others.” Rabbi Weinberg was enormously influential, not because he clamped down on others, but rather because he empowered them. He found a role for everyone, assisting and encouraging them to achieve their full potential.

In Jerusalem, he formulated the Aish Yeshiva as an incubator for creativity and innovation – producing groundbreaking Jewish initiatives such as the Jerusalem Fellowships, SpeedDating, the Jewish Women’s Renaissance Project, Hasbara Fellowships, HonestReporting, and Aish.com, to name a few.

In deciding whether or not to do something, Rabbi Weinberg’s only consideration was whether it would constitute a Kiddush Hashem – an infusion of God-consciousness into the world. His sole gauge was whether an action produced more peace and unity as defined by the Torah.

Rabbi Weinberg lived by these principles throughout his personal life, and made them the cornerstone of Aish HaTorah. If an action would contradict the ideals of peace and unity, Rabbi Weinberg was willing to back down.

The Talmud says: “Make God’s will, your will.” Rabbi Weinberg taught that the only way to discern “the Almighty’s will” is through a relentless process of self-evaluation. In order to attain this objectivity – and see where personal self-interest may be creeping in – he taught these principles:

Perhaps most inspiring of all, Rabbi Weinberg taught that achieving this clarity and pushing toward our goal of peace, unity, and Kiddush Hashem is the greatest pleasure we could have in this world.