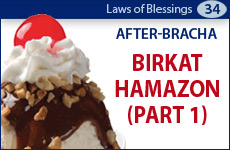 The last few classes have discussed which bracha achrona to say for different foods. In this class, we'll learn that if your meal included bread, then (assuming you ate a kezayit quickly enough) you are obligated to say Grace After Meals. This is called Birkat Hamazon (Hebrew for "the food blessing"), and is commonly referred to as bentching – which means "blessing" in Yiddish. (A prayer book that contains the text of Grace After Meals is often called a bentcher.)

Birkat Hamazon is the consummate bracha achrona, because while most of the food blessings were instituted by the Sages, Birkat Hamazon is a Torah-level obligation, based on Deuteronomy 8:10: "You shall eat, and be satisfied, and bless."1 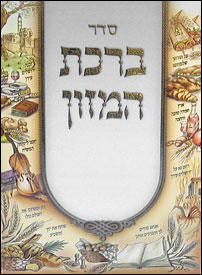 Birkat Hamazon is longer and more encompassing than a regular bracha achrona. It is comprised of four brachot:2

Additionally, we should recite one chapter of Psalms before beginning Birkat Hamazon:6

The next two classes will cover nine main points relating to the laws of Birkat Hamazon. So let's get started:

As is true with other after-brachot, Birkat Hamazon is only recited when you have minimally eaten the volume of a kezayit.8 This is estimated to be approximately:9

On a Torah level, the obligation to bentch is only when you are satiated;10 on the rabbinic level, it applies even when a kezayit of bread is consumed.11 We will see that this distinction can have practical consequences.

As we learned, in order to obligate a bracha achrona, the kezayit has to be consumed within the time period of kiday achilat pras, which is within 3-4 minutes.12

However, with Birkat Hamazon, there is another factor to bear in mind: What if you have not eaten a kezayit of bread within the time period of kiday achilat pras, but you do feel full and satisfied from your meal (having eaten many other food along with the bread)? In such a case, you should specifically try to eat a kezayit of bread within 3 minutes in order to obligate yourself to bentch.

However, if you really can't stomach it (after all, there's no mitzvah to stuff yourself!), or the bread basket is empty, then you do not say Birkat Hamazon, even if you are satiated.13 Of course, if you did eat a kezayit of a combination of other foods within kiday achilat pras, then you would say the appropriate bracha achrona (e.g. Borei Nefashot) for the combination.

David had a roll, steak and fries for dinner, and is nice and full by the end. However, he ate the bread very slowly. Ideally, he should take a slice of bread the volume of a kezayit, eat it within 3 minutes, and then bentch.

Normally speaking, Birkat Hamazon covers all foods eaten in the course of a bread meal, even foods upon which you said a separate bracha rishona.14

Dan washed and said Hamotzee on bread. Then he ate soup and meat. He washed it all down with some white wine (for which he had to say Ha'gafen), and then ate some strawberries for dessert (for which he said Ha'adama). Now he says Birkat Hamazon and it "takes care" of all these foods. 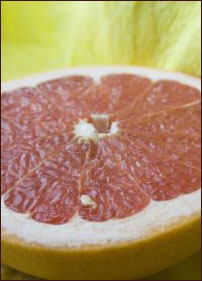 What if you ate some food before you said Hamotzee? Can you rely on the fact that you are about to eat bread – and have the food "covered" by Birkat Hamazon later? Or does this food need its own bracha achrona? This depends:15

(a) Appetizer-Link: If you ate the food (e.g. grapefruit) as an appetizer before Hamotzee specifically to whet your appetite for the bread meal, then you do not say a separate bracha achrona.16 However, it's best to avoid such a situation, either by eating less than a kezayit of the apple, or taking longer than kiday achilat pras.17

(b) Kiddush-Link: On Shabbat, when you say Kiddush on wine before eating bread, you do not say a separate Al Ha'gefen.18 This is because the very essence of Kiddush is that it must be said in conjunction with a meal.19

(c) Bracha-Link: If you've been eating an apple, and then sit down to your bread meal, you will need to say a bracha achrona before saying Hamotzee. This is because – unlike the grapefruit or Kiddush wine which was a precursor to the meal itself – the apple was not eaten at all in conjunction with the meal.20

However, if you plan to eat more fruit (whether apples or any other fruit) during the meal – to the extent that when you said the bracha rishona on your apple you also "had in mind" the "during-meal fruits," then the "before-meal fruit" has been "connected to the meal." As such, it will be covered by Birkat Hamazon, without the need for a separate bracha achrona.21 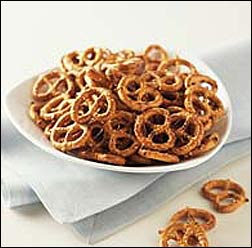 (d) Mezonot-Link: If you'd been munching away at some pretzels before a meal, you do not say a bracha achrona before Hamotzee. As we learned in classes #10-11, Pat Haba'ah B'Kisnin (baked mezonot foods)22 are related to the "bread family" and thus automatically considered "joined" to the main meal.23

However, there is one condition: At the time you said the bracha rishona on the pretzels, you were already planning to soon eat a meal.24

Sarah and Rachel were excited to go to their friend's birthday party. They arrived early and enjoyed the delicious cake appetizers. Sarah planned to stay for the formal meal, so she did not need to say a bracha achrona on the appetizers.

Rachel, though, had a prior appointment and was not planning to stay for the meal. However, Rachel got a phone call letting her know that the appointment was cancelled. Rachel was now able to stay for the meal, but she first needs to say a bracha achrona on the cake appetizers, since at the time she said the bracha rishona she did not plan to connect it to a meal.

In the event of a long intervention between the appetizers and meal, for example a wedding ceremony, it may necessitate a bracha achrona after the appetizers. More on this in class #36.

Let's talk more about Pat Haba'ah B'Kisnin, the baked mezonot foods. We learned that when eaten in a small quantity as a snack, their bracha rishona is "borei minei mezonot" and their bracha achrona is Al Ha'michya. However, when eaten in a large quantity (shiur keviyat seudah), we treat them like bread – we wash, say Netilat Yadayim and Hamotzee. And when we finish eating, we say Birkat Hamazon.25 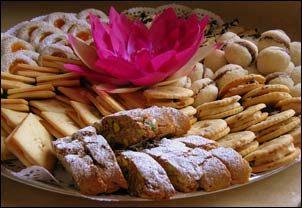 This concludes class #34. Our next class will continue with the remaining nine points relating to the laws of Birkat Hamazon.

39. Answering Amen
Were Adam and Eve Jewish?
How I Learned to Love the Multiverse
10 Big Jewish Inventions
Comments