It's no accident that the NYC mosque is covered with the Jewish symbol.

The plans for the proposed Ground Zero mosque have just been made public – and I'm sure you won't believe your eyes.

The building that's become the focus of a bitter national debate about the suitability of erecting a $100 million edifice promoting Islamic worship in immediate proximity to the site where the World Trade Center stood before its horrific destruction by Muslim extremists can now be seen as it's envisioned by its architects. And yes, it's not your imagination but the magnificent façade of the proposed structure is dominated by what we immediately recognize as the Magen Dovid, the Star of David, the most powerful symbol of Judaism and the Jewish people! 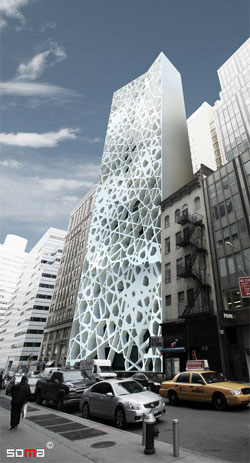 Is it merely a coincidence or is our mind playing tricks on us, seeing something that isn't intended in a design created solely for its pleasing aesthetic appearance?

Indeed, the developers took note of the Star of David design element and made clear that it was not accidental. No, it isn’t an attempt to demonstrate a love for Jews and Judaism but because, they explain, they believe the Star of David conveys a universal message that transcends its Jewish connection.

And strangely enough, to a large extent they are correct.

Today the Star of David serves as an unequivocal Judaic emblem, highlighting the flag of the modern state of Israel. Yet it was not always so. In the Sistine Chapel, decades before Michelangelo made it world-famous for its magnificent ceiling frescoes, visitors were accustomed to looking down rather than up for aesthetic inspiration. It was the floor that received the most admiring attention. It was there that the church had commissioned its artisans to create a 15th century revival of what was known as the Cosmatesque mosaic style – the decorating style the Cosmati family developed in Rome in the 12th and 13th centuries emphasizing hexagonal geometric shapes.

The design was selected not solely for its beauty but because of its spiritual and mystical association.

The design was selected not solely for its beauty but because of its spiritual and mystical association. In the first century of the common era, the Jewish philosopher Philo of Alexandria, Egypt – a man commonly considered the central link between Greek philosophy, Judaism, and Christian mysticism – popularized the notion of two superimposed triangles, pointing both up and down, to show the flow of energy between action and reception, male and female, God and humanity, and the upper and lower worlds. In fact, the Latin name for the kind of mosaic décor making use of this design is opus Alexandrinum – because it is filled with kabbalistic symbolism originally taught by Philo of Alexandria.

The Cosmati family was well aware of this background. Its artisans recognized the great potential of Philo's superimposed triangles to simultaneously express spiritual and visual ideals. For that reason, stunning examples of authentic Cosmati floors and decorations can be found in some of the oldest and most beautiful churches, basilicas, and cloisters in Rome and southern Italy. Even further afield, one of the last Cosmati artisans was brought to London in the 13th century to do the mystical floor mosaics in Westminster Abby, and filled that magnificent cathedral as well with clearly visible Magen Dovids. 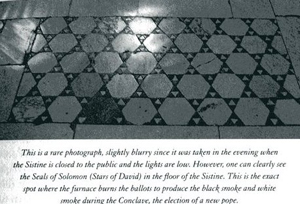 So that is why to this very day visitors to the Sistine Chapel can, if they take a moment to divert their attention from Michelangelo's ceiling to look at down at where their feet tread, be amazed to discover a series of Magen Dovids prominently displayed on the floor.

Origins of the Symbol

While Philo of Alexandria was the one who developed the conceptual meaning of the Star of David, its history – as evidenced by its name connection with the second king of Israel – is clearly much older. The earliest archaeological evidence for the Jewish use of the symbol comes from an inscription dating to the late seventh century before the Common Era and attributed to Joshua ben Asayahu. The legend behind its association with King Solomon, and hence its other name, Solomon’s Seal, is quite fanciful and almost certainly false. In medieval Jewish, Islamic, and Christian legends, as well as in one of the Arabian Nights stories, the seal of Solomon with its hexagonal shape was a magical signet ring said to have been possessed by the King, which variously gave him the power to command demons and to speak with animals. The reason that this symbol is more commonly attributed to King David, researchers have theorized, is that the hexagram represents the astrological chart at the time of David's birth or anointment as King.

However one of the most profound interpretations of the symbolic meaning of the Mogen Dovid restores its significance to its particularly Jewish connection.

Many commentators have suggested that the message of the Star of David is linked to the number seven by way of its six points surrounding the center. The number seven, of course, is key to our understanding the world as a holy creation of God. The earth is the result of a divine plan, not an accidental Big Bang. The world represents the vision of a Creator who after completing it took the time to rest, to evaluate, and to proclaim it “very good” – fulfilling His expectations. In short, the world is holy, a place in which man and everything else created in the six days has the potential to revolve and evolve around its center, its core and its Creator.

The Sabbath, the seventh day every week, is a reminder of this concept. Every seventh year, too, is a sabbatical year in which the land is not to be worked, and after seven cycles of seven years the Jubilee year brings freedom to indentured slaves and the return of property to its original owners.

This emphasis on the number seven as a sign of the holy finds another illustration by way of the menorah in the ancient Temple. The menorah was comprised of seven oil lamps resting on three stems branching from each side of a central pole. Three on each of its sides turned towards the center, six in all directed towards the midpoint, the seventh.

It has been strongly suggested that the Star of David came to be used as a standard symbol in synagogues around the world precisely because its organization into 3+3+1 - triangle up, triangle down, and center - corresponds exactly to the menorah.

In the very heart of Rome, albeit in a house of worship dedicated to another faith, the Star of David persevered.

The irony then in terms of the Star of David being so prominently displayed in the Sistine Chapel is almost unavoidable to notice. The menorah, with its link to the Magen Dovid, is the very item featured so prominently on the Arch of Titus to commemorate the victory of the Roman Empire over what it considered a defeated people never to be heard from again. Rome believed that its conquest of Jerusalem meant the end of Judaism and its message of the mystical meaning of the number seven; for them it was the victory of the sword over the sacred.

Yet in the very heart of Rome, albeit in a house of worship dedicated to another faith, the Star of David remained. It persevered as “the still small voice” of a people, covenantally assured of eternal survival. It preached the ultimate victory of right over might, of the superiority of the spirit over power.

The Roman Empire is no more. The Jews of the menorah and the Magen Dovid are today the people who brought into being the proud state of Israel with its flag that prominently displays the Star of David.

And if others choose to identify with this Jewish symbol, be they the church in the Sistine Chapel or the Muslims in their new mosque, we take no offense. After all, hasn't Isaiah taught us that our mission is to be “a light unto the nations” And how better to do this than by inspiring the world to join us in our dedication to the spiritual goals symbolized by the two overlapping triangles universally known as our Mogen David – the visual representation of the Menorah that brought light to the Temple?

Raising My Daughter with Autism

The Coming Population Bust
For Every Individual, A Torah Scroll
Allegiance To The Monarch
Meet the Real You: Yom Kippur
Comments
MOST POPULAR IN Current Issues
Our privacy policy
Aish.com Is Looking for Great Writers