Why Jews Are Worried 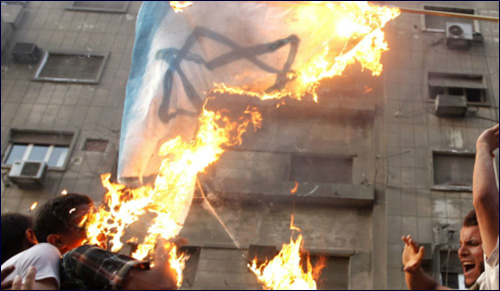 The renowned historian on the rising anti-Semitism in Europe.

An old Jewish joke goes like this: “What’s the definition of a Jewish telegram? ‘Start worrying. Details to follow.’ ”

I am often asked by fellow Jews about contemporary manifestations of anti-Semitism, particularly in Europe. “Is this just like 1939? Are we on the cusp of another Holocaust?” Until now, my answer has been an unequivocal “no.” I have criticized community leaders who, either out of genuine concern or to advance their own purposes, use Holocaust analogies to describe contemporary conditions. These claims are ahistorical. They overstate what is going on now and completely understate the situation in 1939.

The differences between then and now are legion. When there is an outbreak of anti-Semitism today, officials condemn it. This is light-years away from the 1930s and 1940s, when governments were not only silent but complicit. Memory also distinguishes the present from previous events. Now, in contrast to the 1930s, we know matters can escalate. Jews today are resolute in their determination: “Never again.”

And despite all this I wonder if I am too sanguine. Last month, pro-Gaza protesters on Kurfürstendamm, the legendary avenue in Berlin, chanted, “Jews, Jews, cowardly swine.” Demonstrators in Dortmund and Frankfurt chanted, “Hamas, Hamas; Jews to the gas!” And a pro-Hamas marcher in Berlin broke away from the crowd and assaulted an older man who was quietly standing on a corner holding an Israeli flag.

On the eve of Bastille Day, a group of Parisian Jews were trapped in a synagogue by pro-Palestinian rioters and had to be rescued by the police. A few weeks ago signs were posted in Rome urging a boycott of 50 Jewish-owned businesses. In central London last week, anti-Israel protesters targeted a Sainsbury’s grocery, and the manager reflexively pulled kosher products off the shelves. (The supermarket chain later apologized.)

It would be simple to link all this outrage to events in Gaza. But this trend has been evident for a while. In March 2012, four people were killed at a Jewish day school in Toulouse, France. (Last month, a Jewish community center there was firebombed.) In December 2012, Israeli officials warned Jewish men who wanted to visit synagogues in Denmark not to don their skullcaps until they were inside the building. It is increasingly common for Jewish tourists in Western Europe to avoid carrying anything that might distinguish them as such. A shooting at the Jewish Museum in Brussels in May, a month before the latest Gaza conflict began, killed four people.

I am unpersuaded by those who try to dismiss what is happening as “just rhetoric.” It is language, after all, that’s at the heart of the ubiquitous slippage from anger at Israeli military action to hatred of Jews.

Nor am I comforted by the explanation that these actions are being taken by “disgruntled Muslim youth.” (By one estimate, 95 percent of anti-Semitic actions in France are committed by youths of Arab or African descent.) Many of these Muslims were born in Europe, and many of those who weren’t are the parents of a new generation of Europeans.

In the past century a distinct strain of Muslim anti-Semitism has emerged.

It’s true that this is not the anti-Semitism of the 1930s, which came from the right and was rooted in longstanding Christian views that demonized the Jews. Traditionally, Islam did not treat Jews this way. But in the past century a distinct strain of Muslim anti-Semitism has emerged. Built on a foundation of antipathy toward non-Muslims, it mixes Christian anti-Semitism — imported to the Middle East by European missionaries — and a more leftist, secular form of anti-Semitism. It is evident in political cartoons, editorials, television shows and newspaper articles.

The Hamas charter is an example. It contains references to “The Protocols of the Elders of Zion,” a notorious forgery created by Russian czarist police officers in 1903 and later used as Nazi propaganda. The charter accuses Jews of relying on secret societies to foment global economic and political disasters. It calls on adherents to prepare for “the next round with the Jews, the merchants of war.”

The rationales — “it’s just rhetoric,” “it’s just Muslims” — bother me almost as much as the outrages. Instead of explaining away these actions, cultural, religious and academic leaders in all the countries where these events have occurred should be shaken to the core, not just about the safety of their Jewish neighbors, but about the future of the seemingly liberal, enlightened societies they belong to. Yet when a Hamas spokesman recently stood by his statement that Jews used the blood of non-Jewish children for their matzos — one of the oldest anti-Semitic canards around — European elites were largely silent.

Seventy years after the Holocaust, many Jews in Europe no longer feel safe. Hiring an armed guard to protect people coming for weekly prayer is not the action of a secure people. In too many cities worldwide, directions to the local synagogue conclude with, “You will recognize it by the police car in front of the building.” France has seen a sharp rise in the number of Jews who have decided to emigrate (though the figures are still fairly small).

The telegram has arrived. Jews are worrying. It is time for those who value a free, democratic, open, multicultural and enlightened society to do so, too. This is not another Holocaust, but it’s bad enough.

This op-ed originally appeared in The New York Times.

Deborah E. Lipstadt is Dorot Professor of Modern Jewish and Holocaust Studies at Emory University. Her most recent book is History on Trial: My Day in Court with a Holocaust Denier. She blogs at www.lipstadt.blogspot.com and her other comments about the reinstatement of Bishop Williamson can be found at http://lipstadt.blogspot.com/search/label/Vatican%20Reinstates%20Bishop %20who%20Denies%20Holocaust

The Three Boys & the World