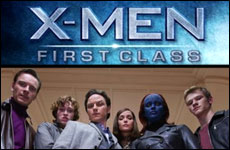 We should all be proud of our inner “mutant.”

Does being part of society mean you have to blend in and look like everyone else, or can you be proud of what makes you different and contribute what no one else can?

X-Men: First Class is a prequel to the other X-Men movies, and as many prequels do, it takes place in the’60s. It explains how Magneto started wearing a giant thimble on his head, how Beast turned into the guy from Frasier, and how Charles Xavier lost the use of his legs. If there’s a sequel, maybe we’ll be treated to the story of how he lost his hair.

Those who are different have to learn to accept themselves.

Mystique, for example, is blessed with the ability to take any form, which must save her a bundle at the gym. But her natural form is dark blue. Sure, she can look like anyone else, but to do that, she has to clench all the right muscles and keep them clenched. Which she does, every time she goes out in public. And you can’t blame her. Nothing in nature is dark blue. Even blueberries aren’t blue.

But as Magneto later tells her, “If you’re using half your concentration to look normal, you’re only half paying attention to whatever else you’re doing.”

Mystique finds a kindred spirit in another mutant, named Henry, a scientist for the CIA mutant division who looks exactly like a guy you'd expect named Henry. He has thick glasses, a lab coat, he’s scrawny, but Henry also has a physical “deformity” – he has weird feet.

Yeah, I know. About 65% of the people reading this article have weird feet. Most of us just try not to wear flip-flops.

And in fact, people only know about Henry’s feet because Xavier, who can read minds, calls him on it as soon as he meets him. “Hi, I’m Charles Xavier. Oh, you have weird feet. Show the class.”

The scariest thing about being different, and the reason people work overtime to hide their differences, is that they don’t know what everyone else is thinking about them. That’s why the most confident X-Person in the movie is Xavier, who always knows what everyone else is thinking. And once you know, parading one’s differences are not that big a deal. You know: It’s the ‘60s; people aren’t thinking, “Oh my goodness, a blue girl! She must be a mutant!” They’re thinking, “Oh my goodness, a blue girl! Groovy!”

Henry’s weird feet do have a purpose: He can use them to hang upside down, which comes in handy when you want to change light bulbs or fix leaky overhangs. Your feet might be weird, but I bet you can’t do that. Or at least that you haven’t tried.

Henry is also smart enough to come up with a “cure” – a way to make Mystique and himself look “normal.” But when he tries the cure on himself, it speeds up his mutation, and he proceeds to turn into a Teen Wolf. And once he’s walking around with shag carpeting all over his body, he can no longer hide. He no longer has the option of fretting about what other people are thinking, and resigns himself to honing his mutant abilities. Forget Henry; now he’s “Beast.” And the others finally accept him.

Sure you may be different, but once you open up to others, you realize that everyone is “different.”

Hiding is an immediate reflex response, but it doesn’t help anyone in the long run. Sure you may be different, but once you open up to others, you realize that everyone is “different.” Everyone has their thing. Not one person, once you get to really know them, is “normal”. (This is something you learn in marriage.)

Every mutant in the movie starts off thinking he’s alone, but is relieved to find that there are others like him. But if you think about it, no two mutants are actually alike. They’re alike in that they’re equally different, but each one has his own power. Charles is a busybody, Beast has to wear a T-shirt before getting into the pool, Banshee shatters glass when he sings, Havok has an enormous hula hoop problem that he doesn’t want to talk about, and Magneto can pin handy reminders to himself. No one is good at everything.

But the thing about each person having only one power is that to get anything done, you have to move with a crowd. “Great, now we have to get up there! Does anyone here fly?”

Everyone has a talent, but no one has all the talents. We all need each other to get by. Is “strange” bad? I would say it’s necessary. If we’d all be doctors, there’d be no one to build the hospitals. And if we all marry someone who is exactly like us in every way, only half the housework would get done – the other stuff wouldn’t even occur to us.

Everyone has their own “mutations”, and sometimes they’re picked on for it. The doctor, as a teenager, was a smart, brainy kid, but probably got beat up a lot. Should he have played dumb all through school? If he had, he’d never have grown into a doctor. You have to show what you can do so you can eventually go to a school with other doctors and learn how to deal with the non-doctor people – namely, make them wait in a small room in their underpants on a sheet of butcher paper. But while they’re in high school, they’ll probably get dangled over the toilet a lot. And you know what happens if you get dangled over the toilet a lot? You evolve feet that can hang onto the ceiling.

People can’t know who you are or accept you until you stand up and show them. No one who “blends in” has ever been known for his contributions to society, ever. We as Jewish people should know that better than anyone. 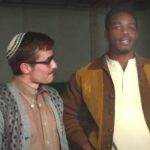 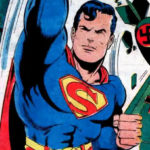 Superman vs. the Nazis5 min read