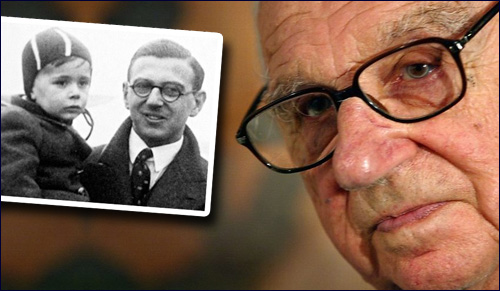 Nicholas Winton saved 669 children from the Holocaust. In this moving clip he meets them for the first time.

In 1938, Nicholas Winton helped 669 Jewish kids escape certain death from the Nazis. He never told anyone.

While on ski trip in Switzerland, Winton took a detour in Czechoslovakia to help the children of refugees. Nazi Germany had recently annexed a large part of Czechoslovakia and the news of Kristallnacht, a violent attack on Jews in Germany and Austria, had just reached Prague.

Winton set up a rescue operation for the children, filling out the required paperwork for them to be sent to homes in Sweden and Great Britain. He had to raise money to fund foster homes for all of them, and then he sent 669 children away from Czechoslovakia on trains before the Nazis closed down the borders.

Winton told no one that he did this, not even his wife. In 1988, his wife found a scrapbook full of pictures of the children and letters from parents in their attic. She arranged to have Winton's story appear in newspapers.

Many of the children Winton saved went on the BBC television program, That's Life, to meet him for the first time since the war. They refer to themselves as "Winton's children."

Winton died on July 1, 2015 at the age of 106. He received awards from Israel and the Czech Republic as well as Knighthood from the Queen of England in 1993.

Miracle of Israel #1 - Aftermath of the Holocaust

Miracle of Israel #5 - Homeless and Stateless

Poland Video Log Part 1: At Treblinka Death Camp
Why My Iranian Mother Didn’t Want Me to Become a Religious Fanatic
The Jewish History of Prague
Why the Sexual Revolution was Bad for Women
Comments
MOST POPULAR IN Holocaust Studies
Our privacy policy
Aish.com Is Looking for Great Writers