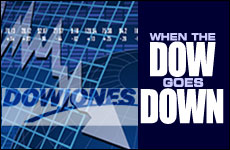 A Jewish perspective on the widening financial crisis.

As we watch the turmoil on Wall Street, our sinking portfolios, and the financial crisis that may be leading us to a severe recession, we're left to wonder what is the deeper spiritual message.

After all, what we are seeing now isn't something new – although we wanted to fool ourselves into thinking that it wouldn't happen to us again. Too bad we can't be as smart as Warren Buffett, universally recognized as the world's best and most intelligent investor. In 1999, as analysts kept insisting that "this time there is no limit to how high the market could go," Buffett warned of what he called "an almost biblical kind of symmetry." He was referring to the Book of Genesis, where Joseph is called to interpret the dreams of the Egyptian Pharaoh: Seven lean cows ate seven fat cows, and seven lean ears of grain consumed seven plump ears. The interpretation, said Joseph, is that seven years of bounty will be followed by seven years of famine.

Almost eerily, Buffett linked Joseph's seven-year cycles with the performance of the Dow Jones at the close of the 20th century. He recognized that the concept of economic cycles discovered by Joseph is as relevant today as it was then, and could only be ignored at our own peril.

The concept of economic cycles discovered by Joseph is as relevant today as it was then.

And so, just about seven years after the bull market again began to roar in 2001, the seven "fat cows" of prosperity are being swallowed up the "lean cows" of sub-prime mortgage defaults, bankruptcies and hedge-fund collapses in 2008.

There is a stark truth that somehow never seems to be acknowledged. Crashes are treated as total surprises, unpredictable and beyond reason – as if Joseph's words weren't part of our ancient legacy. It is a mistake to believe, as most do, that people had no advance warning for the Crash of 1929. In the book Blood in the Streets, the authors Davidson and Rees-Mogg quote Paul Clay who in 1928 identified major financial fallacies. "First among these fallacies," he wrote, "is the New Era delusion, as typified by the famous dictum, ‘This is a new era. Statistics of the past don't count.' Every period of great prosperity is considered to be a new era and so much better fortified to give promise of permanence."

Sound familiar? Before the most recent crash of 2000, newspapers and magazines overflowed with stories about the "new paradigm" – the notion that thanks to increased global competition and technological advances, inflation and the business cycle are dead. The advanced economies, in other words, could look forward to uninterrupted years of strong growth and low inflation, and the exuberance of equity prices around the world was thereby justified. As a spokesman for Merrill Lynch put it in 1999, "We are genuinely in uncharted territory – there are no chart points or critical levels we can refer to."

And that's what the Wizards of Wall Street repeated in 2007 as housing prices soared beyond any justifiable barometer and the herd of investors borrowed heavily against their mortgages to buy stocks they were assured could only move to as yet unimaginable highs. In other words, forget the past and the theory of economic cycles. Joseph, it seems, was wrong.

But Joseph wasn't wrong. Cycles are here to stay. They can always be counted on. And the Jewish sages not only accepted them as economic realities, but explained them as having deep spiritual benefit.

Do you want to know why God doesn't simply keep showering His blessings on us in uninterrupted fashion? The answer appears in the Talmud in response to a question about the manner in which the Jews received manna from heaven as food when they traveled through the desert on their way out of Egypt.

"Why," asked the students of Rabbi Shimon bar Yochai, "didn't God give the Jews their entire food for the year at one time, rather than doling it out in a daily fashion?" To which the rabbi responded, "Let me offer you a parable: A king used to give his son a sizeable allowance once a year. The prince would only visit his father when his funds were depleted. The king then changed his arrangements to distribute only enough money for one day at a time. In this way he would see his son on a daily basis. So too, God provided the manna in daily portions to keep every person's eyes focused toward Heaven as source for his sustenance."

What we want from God is His blessings. What God desires of us is awareness of the relationship. Give too much and we take it for granted. Give uninterruptedly and we assume our blessings are coming to us without any need for gratitude or acknowledgement.

The Code of Jewish Law tells us in the first chapter that every day "Every Jew is required to recite the biblical chapter that tells the story of the gift of the manna." Why? So that we reaffirm our awareness of God's role in providing our daily necessities. With technology creating an illusion of total control, that lesson applies today now more than ever.

Every so often, we need a reminder that it is our Father who doles out our allowance.

God wants the world to run in a seemingly natural fashion. Incomes are earned, moneys accumulated, portfolios allowed to grow in ways that offer us the semblance of security. But every so often, perhaps seven years – corresponding to the weekly Sabbath meant to remind us of God's ongoing rulership – we need a reminder that it is our Father, the King of Kings, who doles out our allowance and to whom we must give thanks.

When our coffers are full, our granaries overflowing, the Torah reminds us that there is an all-too-human trait of distancing oneself from God. "And Yeshurun (the Jewish people) waxed fat, and they kicked [away their attachment to the Almighty]." Wealth sometimes brings with it forgetfulness. Forgetting where we came from. Forgetting to whom we owe our good fortune. Ignoring the One Above without whom we would have nothing.

This idea finds expression in the biblically-ordained Sabbatical (Shmita) year. Every seven years in the Land of Israel, not only do we let the land lie fallow, but we must allow other people to freely enter our fields and take any available produce. We unlock our gates, in effect proclaiming that we have no individual dominion over the land; all privileges emanate from God, Who can give and take at will.

Ironically, this year (5768 on the Jewish calendar) is indeed a Shmita year.

So when the Dow drops, as it always must, and the divinely-ordained cycle brings us back down to earth, as it has now, it's important to remember this: When times get too good, and our relationship with God is threatened by the kind of self-assured egotism that often accompanies extreme wealth, He reminds us of where we could be without Him. And when times are bad, He renews His role as Provider in the hope that the lessons we learned when humbled by diminished prosperity will make us better human beings... as we enter the next cycle.

The Mandate to Heal
It Takes A Lot Of Faith To Be An Atheist
How Instagram Brought Back This Nostalgic Soup
What Makes Eli Run?
Comments
MOST POPULAR IN Interpersonal
Our privacy policy