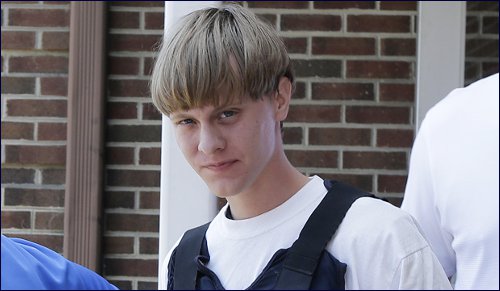 Dylann Roof’s manifesto of hate is unfortunately shared by many.

As the world reels in the aftermath of the horrific massacre at the Emanuel African Methodist Episcopal Church in Charleston, South Carolina, from some quarters, there is praise for the crime.

To a frightening number of people, Dylann Roof, the 21-year-old white supremacist who murdered nine church-goers in cold blood after first attending a Bible study class with them, is not an object of horror and revulsion, but a role model: possessing courage "to do what most white supremacists only talk about". That quote, from a neo-Nazi website monitored by the Anti-Defamation League, was echoed across the white-supremacist blogosphere, according to the organization. Chillingly, this hatred goes beyond loathing of African Americans, who were the victims of Roof's rampage, and links a visceral abhorrence of black people with an enmity towards Jews.

Roof writes in his online manifesto: "I think that if we could somehow destroy the jewish (sic) identity, then they wouldn't cause much of a problem... Just like (racial epithet), most jews (sic) are always thinking about the fact that they are jewish (sic)... The other issue is that they network... I don't pretend to understand why jews (sic) do what they do. The are enigma (sic)."

Roof's poisonous ramblings are typical of much of neo-Nazi thought. While white supremacists and neo-Nazis hate the racial or ethnic minorities in their midst, often their greatest ire is reserved for Jews, who – in their twisted mindset – are seen as "controlling" those elements of society of which they disapprove. This insidious message is gaining increasing acceptance around the world, as right-wing parties gain ascendance, and the internet facilitates the spread of hate.

In Hungary, Lajos Rig, a candidate of the right-wing Jobbik party, has accused Jews of using Gypsies (who find themselves the object of derision and hatred for Jobbik supporters) as a "biological weapon" against ethnic Hungarians. His message paid off; on April 11, 2015, Rig found himself elected to Hungary's parliament in Jobbik's first national-level victory. (Jobbik's leader has since intensified the party's anti-Jewish message, asking Hungary's leader to draw up a list of Jews in the country who might pose a "national security risk".)

Neo-fascist parties are rising elsewhere in Europe, as well. Greece's Golden Dawn party is open in its Jew-hatred. Supporters march in formation wearing black shirts and blame Jews for many of Greece's problems. Far from alienating the Greek electorate, their intense anti-Semitism has paid off. Golden Dawn is now the third most popular political party in Greece; fully 69% of Greek adults admit to openly anti-Semitic views.

A 2014 parliamentary inquiry on anti-Semitism in Germany yielded some shocking results. After the Jewish community there suffered some high-profile assaults by Islamists, a German parliamentary committee investigated every anti-Jewish incident in 2013. While Jews there suffered dozens of attacks by Islamists, the vast majority of anti-Semitic incidents (1,218 out of 1,275) were carried out by neo-Nazis.

In recent months, some of the most horrific attacks on Jews worldwide have been the work of neo-fascists. A visceral hatred of Jews motivated by white supremacy seemed to be behind the April 13, 2014, murders of three people at the Jewish Community Center and at a nearby Jewish nursing home in Overland Park, Kansas. (The shooting recalled the murder of Stephen Tyrone Johns, a security guard at the US Holocaust Memorial in Washington DC, on June 10, 2009, by another white supremacist who openly denied the Holocaust.) On April 6, 2014, in Sydney, Australia, a school bus full of Jewish students was terrorized by a group of drunken neo-Nazis who menaced and threatened the children. One other recalled that her daughter called her from the bus saying "Hey Mummy, please help us, there are eight strange men...and they are screaming 'Heil Hitler – Kill the Jews!' They want to cut our throats!"

Britain has become the latest target. On April 18, 2015, a group of British and Polish neo-Nazis gathered in the heavily Jewish neighborhood of Stamford Hill, in London, to protest the "Jewification" of the UK, and in June 2015, neo-Nazis uploaded a triumphant video of themselves defacing Cannon Hill Park in Birmingham with anti-Jewish symbols and graffiti. Neo-Nazi assaults on British Jews are set to intensify on July 4, when fascists are planning to hold an anti-Jewish protest against what they term "Jewish privilege" in Golders Green, in the heart of London's Jewish community. The demonstration will begin with fascists burning the Talmud (which they decry as full of "anti-white teachings"), and shredding Israeli flags.

British officials have yet to respond forcefully. London's police have said they have no power to stop the rally, while London's mayor Boris Johnson has said he has a responsibility to "balance" protection for London's Jews with protection of free speech and that, in this context, he "support(s) peaceful protest". While it's unclear yet how big the July 4 anti-Jewish rally will be, its organizers are seemingly emboldened by the tepid response, and have already announced there will be further anti-Semitic demonstrations in other neighborhoods in the future.

How can we stand up to neo-fascist racism and Jew-hatred?

When I was a child, my grandparents lived in Skokie, Illinois, a Chicago suburb in which one out of six residents was a Holocaust survivor. In 1977, the American neo-Nazi party announced their plans to carry out a march in Skokie, in uniform, carrying flags with swastikas on them. My grandparents and others were horrified. A series of court cases delayed the march, but didn't stop it. On June 25, 1978, the march took place and my grandparents were there along with hundreds of other counter-protesters.

I vividly remember one of my grandmothers triumphantly telling me afterwards that she watched as a Jewish woman walked up to one uniformed Nazi and spat in his face. The march and its counter-rally was a turning point. Skokie's Jews began raising funds for what today is the Illinois Holocaust Museum, a major center for remembrance and education. London's Jews are also planning a counter-demonstration to the July 4 rally, emphasizing their neighborhood's openness and diversity.

The dangers of neo-fascism are very real. In the face of threats from extremists, we have an obligation to stand up and counter lies and slanders about Jews and others, and to send the message that we will never again tolerate anti-Semitism and other hatreds. Let's each rally to counter neo-Nazism's toxic message: whether we do so physically in London on July 4, or online, or in our daily lives. Let's each send the message that racist discourse against Jews and African Americans is always unacceptable.