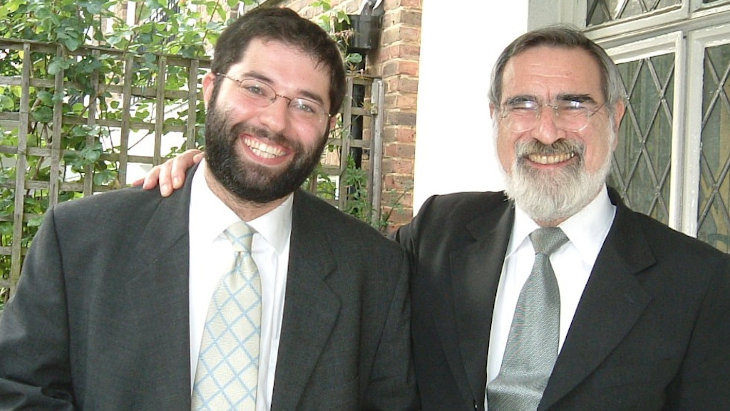 Born and raised in London, I was 15 when Rabbi Jonathan Sacks was appointed Chief Rabbi of Great Britain and the Commonwealth. I attended a number of his talks and read a number of his books and articles while in my late teens, but it was once I became a Judaic Studies teacher to Middle and High School students in my early twenties when I found myself reading more of Rabbi Sacks’ books, attending more of his talks, and appreciating more of his ideas.

When I took some time out from my teaching to study for semicha (rabbinical ordination), Rabbi Sacks a regular lecturer at my Kollel and he was among the group of rabbis who tested me for my rabbinical exam, thereby providing me with a greater opportunity to learn from him.

When I moved to Israel in 2012, I started to teach a course on "The Thought of Rabbi Sacks" to post high-school seminaries, giving my many students a deeper appreciation of Rabbi Sacks’ profound ideas.

A few years ago I wrote a short Facebook tribute to Rabbi Sacks, as part of a Hanukkah series called "8 Days for 8 Teachers." I thanked him for everything he had taught me, all the inspiration he had given me, and for all the encouragement and support that he had shown towards me.

And then Rabbi Sacks called me. Yes, he actually called me to thank me for the post.

For some people, the very idea that a global religious leader, who used every moment to the fullest and whose opinion was sought around the world, would even bother to acknowledge a social media post from a relatively insignificant Torah teacher seems absurd.

While Rabbi Sacks was a man of incredible vision, he was someone who deeply valued even the smallest of human gestures, part of what he called "the poetry of everyday life."

However, Rabbi Sacks never thought this way. While he was a man of incredible vision, he was someone who was attentive to, and who deeply valued even the smallest of human gestures, and this is because he understood that it is the small things that, as he once put it, are part of "the poetry of everyday life" (1).

In fact, when both Rabbi Sacks and his wife Elaine were interviewed in 2019 by the Sunday Times’ Magazine about their marriage, Elaine remarked how, “My greatest joys in life are simple. We live near Hampstead Heath and just love it. If we go for a muddy walk, the next day I will find my shoes sparkling clean. Jonathan likes cleaning them. If everything is tidy, then his mind is clear to think.”

Here too, for some people the very idea that a global religious leader would make the time to clean and polish his wife’s shoes may be hard to fathom. But for Rabbi Sacks, cleaning his beloved wife’s shoes was a further expression of his appreciation of the simple human gestures and the value he placed on "the poetry of everyday life".

Often, many of us distinguish between our relationship with God and our relationship with others. However, what made Rabbi Sacks and the ideas that he taught so refreshing and inspiring was how he saw these spheres to be utterly interwoven. As he once wrote, "I have sought God, not through philosophical proofs, scientific demonstrations or theological arguments; not through miracles or mysteries or inner voices or sudden epiphanies; not by ceasing to question or challenge or doubt; not by blind faith or existential leap; certainly not by abandonment of reason and an embrace of the irrational. These things have brought many people to God. But they have also brought many people to worship things that are not God, like power, or ideology, or race. Instead I have sought God in people – people in themselves seemed to point to something or someone beyond themselves." (2)

Given this, Rabbi Sacks explains how, "faith lives, breathes and has its being in the world of relationships, in the respect we pay our marriage partner, the steadfastness with which we bring up our children, and the way we extend the feeling of family to embrace neighbours and strangers in acts of hospitality and kindness" (3).

In fact, it was an extension of this idea of seeing God in people that underpinned one of Rabbi Sacks’ major theological messages, described by the phrase "the dignity of difference", which he explained to mean that, "the test of faith is whether I can make space for difference. Can I recognize God's image in someone who is not in my image, whose language, faith, ideals are different from mine? If I cannot, then I have made God in my image instead of allowing him to remake me in His" (4). 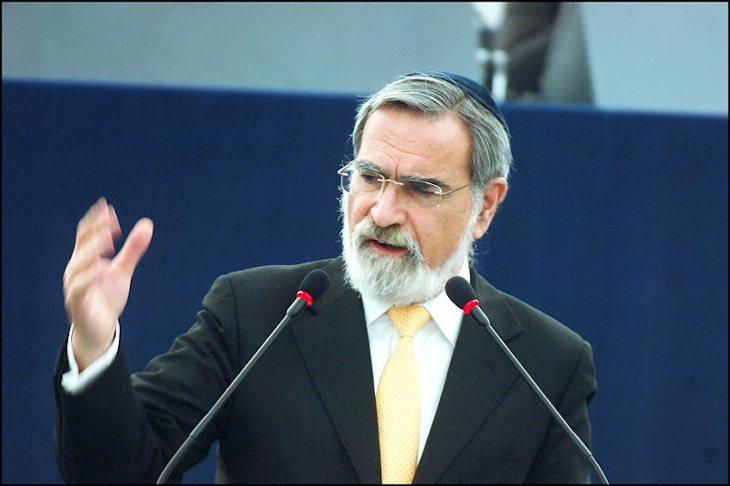 Beyond enriching our understanding of the divine element of human relationships, Rabbi Sacks also acknowledged the human element of our divine relationship, speaking of faith in terms of human uncertainty and vulnerability. He often remarked how, "faith does not mean certainty. It means the courage to live with uncertainty" (5), and he observed that rather than questioning being a sign of religious weakness or confusion, "questioning is at the heart of Jewish spirituality" (6). By doing so, Rabbi Sacks communicated a profound and stirring message to the many Jews who have doubts and questions in their faith that rather than their doubt expressing weak faith, it was an expression of genuine, heartfelt and authentic faith.

In terms of his intellect, the word ‘brilliant’ doesn’t even come close! Rabbi Sacks was an outstanding moral philosopher and Torah scholar - an expert in both fields, and so many more. But unlike many people who think of the university and the yeshiva as being two separate worlds, Rabbi Sacks’ philosophy was rooted in the fusion of ‘Torah V’Chochmah’ – Torah teachings, and general wisdom. As he once wrote, "know that [these] are not two separate domains; [instead], they are the two hemispheres of the Jewish soul. Chochmah (wisdom) reminds us that we are humans, we are citizens of the universal enterprise of mankind, and Torah reminds us that we are Jews, heirs of the greatest heritage ever conferred upon a people." (7)

Rabbi Sacks taught many profound ideas but he prioritized actions, believing that "the fundamental idea of Judaism was and is that we bring God into the world through daily acts and interactions."

Yet while Rabbi Sacks was a remarkable academic, he did not simply reside in the world of academia. Yes, he taught many profound ideas, but more importantly, he prioritized actions, and this is because he believed that "the fundamental idea of Judaism was and is that we bring God into the world through daily acts and interactions, precisely as the book of Genesis portrays the religious drama in terms of ordinary lives." (8)

Rabbi Sacks was a lover of people, of wisdom, of Torah, of Israel and of God. When he spoke, he would often refer to his audience as "friends" – and he meant it. He was generous with his time, and in addition to the many people with whom he spoke, he gave advice and mentorship to thousands of men and women whose lives have been transformed by his insight, wisdom and acts of kindness towards them.

In conclusion, I would like to reflect on three messages which I think powerfully express the teachings and legacy of Rabbi Sacks as they relate to God, Responsibility, and Hope.

In terms of Responsibility, Rabbi Sacks taught that "more than we have faith in God, God has faith in us" (10), and that while, "Jewish history begins in miracles, [it] culminates in human responsibility" (11). Consequently, the question we should ask ourselves "is not what is done for us by God, but what we do in response to his call." (12) As Rabbi Sacks mentioned many times, his path towards becoming a religious leader began with the message he was taught by the Lubavitcher Rebbe who, while discussing Jewish student life in Cambridge, challenged him not to accept the situation but to change it. As Rabbi Sacks explained, "good leaders create followers; great leaders create leaders", and just as the Lubavitcher Rebbe taught him the concept of responsibility, so too did Rabbi Sacks to so many others.

Finally, as Rabbi Sacks explains, "one of the most important distinctions I have learned in the course of reflection on Jewish history is the difference between optimism and hope. Optimism is the belief that things will get better. Hope is the belief that, together, we can make things better" (13).

Over his incredible life, Rabbi Sacks taught, enlightened and inspired us all, but beyond this, he loved, he cared and he encouraged us as well. Some years ago I asked Rabbi Sacks to be the keynote speaker at a student conference that I had arranged. When he arrived, he gave me a book about Jewish education as a gift, in which he had inscribed the following message: "To Johnny – In great friendship and admiration. You have great achievements ahead of you – may Hashem be with you all the way. With blessings, Jonathan Sacks".

Rabbi Sacks gave me – as he gave so many others – the blessing of encouragement to continue to hear the call of God, to rise to the responsibility of communal leadership, and to know that, with effort and belief both in God and in others, we can make things better. And though his loss is so incredibly painful, there is still so much work for us all to do.

Rav Johnny Solomon is British born Jewish educator and writer. He has a BSc in Math & Religious Studies, an MA in Jewish Education, and Semicha (rabbinical ordination) from the Montefiore Kollel (London). While in London, Rav Johnny held numerous senior positions in Jewish education including Head of Judaic Studies at Immanuel College and Head of Judaic Studies at Hasmonean Girls’ School. In 2012 Rav Johnny moved to Israel with his family where he teaches at a number of adult learning institutions, and works as an independent Jewish educational consultant writing curricula and Jewish content for various organisations around the world.

Checking Out the Jewish Scene in Phuket, Thailand

Count Us In
Faith: the Axis Upon Which the Wheel of Science Turns
Love - Not Just About Chemicals Anymore!
Is There a Moral Code in a Virtual World?
Comments