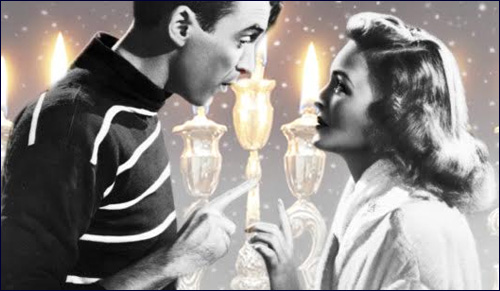 From “It’s a Wonderful Life” to It’s a Verklempt Life.

This time of year, there are so many Christmas movies airing on TV. Which raises the question – where are all the Chanukah movies? Name just one.

Don’t despair. I have an amazing solution: Simply take the wonderful Christmas movies, run them through the “Re-Jew-vinator”, and turn them into wonderful Chanukah movies. See how simple life can be sometimes?

Here are five examples you may see on TV some year, assuming I can get the rights and am not run out of Hollywood. If I am, I’ll take comfort in knowing that all great geniuses have been misunderstood at one time or another.

It is Chanukah time, the smell of latkes is in the air, and the Feinblatt family is preparing for a vacation in Israel. But the youngest in the family, Reuven, gets into a scuffle with his older brother Menachem about what is better – kishke or cholent, and is sent to his room while the rest of the family plays dreidl. The next morning, while the family rushes to make it to the airport on time, they completely forget about Reuven, who now has the house all to himself. Being home alone is fun for Reuven, having matzo brei all to himself, jumping on his parents' plastic sheet-covered furniture, and trying to contact Mayim Byalik on Facebook. But suddenly Reuven discovers that two burglars, Heshie and Yakov, are about to rob his house on Chanukah Eve. Reuven acts quickly by reading passages in the Torah that inspire him to wire his own house with makeshift booby traps (such as exploding herring bottles)to stop the burglars and to bring them to justice.

In a Brooklyn orphanage, a baby boy, Baruch, mistakenly crawls into the book bag of a rabbi visiting from Israel. Later, as an adult who happened to be raised by Torah scholars, the rabbi allows him to return to San Francisco, to find his birth father, Shlomo Pearlstein. Pearlstein, however, is so self-involved, he never even knew he had a son. He also had to be reminded that he had a wife, a dog, and a left foot. Baruch, meanwhile, experiences the delights of San Francisco as only a boy raised among Torah scholars can. At the local kosher deli, Baruch falls in love with his waitress, Trixie, who as a baby had crawled into the grocery bag of a radio station’s helicopter traffic reporter. With Shlomo’s blessing, Baruch marries Trixie, and the two have a baby boy—who proceeds to crawl into the sack of their mailman—and eventually become a mailman himself.

A CHANUKAH STORY (“A Christmas Story”)

Chanukah is approaching and 9 year-old Chaim wants only one thing: a yarmulke with a built-in Amazon Echo feature. When he mentions it at the dinner table, his mother's immediate reaction is that it will distract him from everything else going on in shul. Between his younger brother Izzy and having to deal with the school bully, Moe Solomon, Chaim doesn’t know how he can possibly survive long enough to get the Amazon Echo yarmulke for Chanukah. When Mrs. Weinberg, Chaim’s teacher at the Yeshiva, assigns the class to write a theme about what they want for Chanukah, Chaim eloquently expresses his desire for the Amazon Echo yarmulke. Not only does he get a C-plus, but Mrs. Weinberg writes across the top of the paper, “It will distract you from everything else going on in shul.” To add insult to injury, Chaim kisses the mezuzah on his way into his house, but it’s so cold out, his tongue gets frozen to the mezuzah. Only firemen are able to free him.

Chanukah is here, and Ezra Weiss knows that he should be happy, but he’s not. He also knows that his friends are just not impressed by the miracle of the menorah—it just can’t compare to their iPhone apps and games. But the rabbi is away for vacation and Ezra just doesn't know what to do about it. When Chava suggests that he direct the Chanukah play, Ezra hopes to find the true meaning of Chanukah in the process. But that doesn't seem to be working. One of the last pieces for the play is to get a special golden digital dreidel as the set centerpiece. Instead, Ezra chooses a small, old, neglected dreidel that he believes needs some tender loving care. Although it is the exact opposite of what his cast asked him to get, it may act as that symbol to bring the true meaning of Chanukah back into everyone's lives, with a little help from a speech by Pinchas.

It’s Chanukah Eve in Rosenstein Falls, and Jewish guardian angel Moishe is assigned to convince the desperate Fivel Blumberg not to sell his body to science while he’s still alive. Fivel is a good man who sacrificed his dreams and his youth on behalf of the citizens of his small town. He inherited the kosher deli from his father and he gave up traveling the world and his dream of replacing all school cafeterias with Jewish delis. Later he resisted the proposals of the evil challah maker, Mr. Mandelbaum, and never sold his business to protect the poor community of Rosenstein Falls even though the offer would afford them to buy their own house. He married his beloved Tzivia Blumberg and had four children with her and a tough life with his family. When his uncle Schmerel loses US$ 8,000.00, found and stolen by Mr. Mandelbaum, George decides to sell his live body to science, since he believes he’s worth more dead than alive. When Moishe sees that he is not able to persuade Fivel to give up his intention, he decides to show life in town if Fivel had never existed. Embarrassingly for Moishe, that life turns out be far better than it is now for Fivel.

Advising Guys on Buying Gifts
It Takes A Lot Of Faith To Be An Atheist
How Instagram Brought Back This Nostalgic Soup
What Makes Eli Run?
Comments
MOST POPULAR IN Jewlarious
Our privacy policy