Travels with My Ego 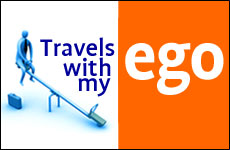 Rising above life's ups and downs.

I wrote a book.

I wish I could say that it doesn't matter to me if you buy it, read it, or like it. But I'd be lying. It does matter to me. A lot.

Am I proud that I feel that way? No. Does it mean that I am insecure, vulnerable and on wobbly terrain? No. It means I am normal (at least in this area of life). All of us, to varying degrees, are concerned with the opinions that others have of us, especially when we display and disclose our feelings, skills, beliefs, activities, and idiosyncrasies to the public eye. That's how we are wired.

And so, my ego and I were trekking down Coney Island Avenue some weeks ago, when we chanced past Berman's, one of the local Judaica Bookshops. This was not an uncommon occurrence. My ego and I often travel together, as we do share assorted common interests and pursuits.

I was not surprised, therefore, when he turned to me and said:

"Lots of books in Berman's window, but where is yours?"

Predictably, I gulped. It was not the first time I had noticed the glaring omission in the window. But, for some reason, this time I decided to venture inside. "Maybe (gasp) they don't even SELL my book!" I had to find out.

I meandered my way past the CD's, the Artscroll Talmud volumes, and some genuine customers and parked myself at the New Releases section. There were several copies of my book. Relieved, I lifted one of them and tried very hard to appear like an ordinary book browser. Secretly, I hoped that others might notice, take the hint and also take a peek at my book. They didn't. But I didn't stop there.

"This is my book," I offered to the young sales clerk. "How's it selling?"

"Okay, I guess... I don't really know," he replied without looking up.

I didn't stop there either.

"I know this sounds a little funny (it didn't)," I stammered, "but my kids are always asking me why my book is not in the window."

It felt kind of pathetic. Here I was, a grown man, practically begging to see my book in the window. But, it worked.

Ten seconds later I was back on the sidewalk, reunited with my ego, and proudly peering at the newly adorned window. Frankly, it looked good. In fact, the whole display somehow seemed brightened by the new addition (yeah right). I smiled too broadly and scampered home.

Fast forward a few days. I'm on my way to the drug store for a Diet Snapple. And as I walk past Berman's, my eyes automatically dart to the right for a quick and proud glance at my book in the window. Only one problem -- it isn't there. IT'S GONE!!

I wasn't sure what I was more upset about -- the book having been removed or the fact that it bothered me. Either way, I wasn't a pretty sight.

My book had been replaced by... by... some...some other book, the name of which I forgot instantly. I stood there in mortal silence, pretending that it didn't matter, and wondering what to do next. I felt like I had been duped. The clerk who had instructed me to put the book in the window had, in fact, only been humoring this pitiable and desperate soul, but as soon I left the scene he promptly removed it and restored to its rightful place -- buried on a lonely, dusty shelf.

I continued my lonely journey to the drug store, but my pace had now slowed considerably and my shoulders probably dropped an inch or two as well. I wasn't sure what I was more upset about -- the book having been removed or the fact that it bothered me. Either way, I wasn't a pretty sight.

Arriving at the store, I headed straight for the refrigerator. I half-expected them to be out of my favorite flavor, but I was wrong. I snatched the bottle off the shelf and trudged over to the check-out counter. The girl behind the register was unfamiliar to me. She rang up my Snapple and counted some change. This simple transaction was about to end. But then she looked at me, and with just a few words, she transformed my paltry purchase into a mood altering event.

"What the Angel Taught You, right?" she said.

She had uttered the title of a previous book I had written and recognized me as the author. I tried to stop my grin, but it was of no use.

"Oh, I've heard you speak many times and I always watch your weekly video blog on Aish.com. It's wonderful. Besides, I've read your book seven times! You're my favorite author."

If the Snapple hadn't been on the counter, it would have skidded out of my hand into a thousand shards on the floor. There wasn't much I could say. I just stood there, dumbfounded, with the stupid grin growing wider and probably straightening my tie or something.

I thanked her a bit more than I should have and told her about my new book. She seemed excited and promised to pick one up right away. Collecting my drink, I awkwardly marched to the exit. Like a yo-yo on steroids, my psyche had just been pummeled and exalted, beaten and hoisted, crushed and invigorated. And all within a few seconds.

It reminded me of the credo of a great Chassidic leader. I believe it was Reb Mendel of Kotsk. It was said that he lived his life according to two major philosophies. One was the declaration by Abraham of supreme humility, when he prayed to God for the welfare of the people of Sodom, "For I am but dust and ash," (Genesis 18:27). The second was the dictum of our Sages of the Talmud of ultimate responsibility, "It is incumbent upon everyone to say, 'The entire world was created just for me (Sanhedrin 37a)."

Those closest to him say that he wrote each passage on a separate piece of paper, and that he kept both papers with him all the time, in separate pockets.

"The complexities of living require the implementation of both schools of thought," he would teach. "Sometimes we must feel like we are so very small; other times we must realize that the entire universe revolves around each of us. The secret of life is to know when to reach into which pocket."

Both of those reactions were ego-driven. I was just a frail reed, blowing in a gust of vanity.

The events of that day had thrown me from one end of the emotional spectrum to the other, but both of those reactions were ego-driven. I had allowed the perceptions of others to completely dictate my equilibrium. I was just a frail reed, blowing in a gust of vanity.

Contrast that insecurity with the sanguine mentality of the rebbe. He taught that it is our inner choices that should dictate how we feel, not external opinions. There are times we should focus on the inherent, objective greatness that resides in each and every soul, feeling empowered to put our stamp on the world. And there are times we should have the humility to sense our inherent smallness.

These emotions can never emerge from the reactions of those around us. We cannot allow ourselves to be overwhelmed by rejection or intoxicated by the limelight.

Instead, when we feel small, it is a healthy realization that without a Supreme Being we can accomplish nothing. And when we feel big, it is because our potential for change and growth is truly endless.

Tell that to your ego, next time you travel together.

The Greatest Protection: Ethics of the Fathers, 3:5

Every Night, Forgive Yourself and Others
Saadiah Gaon, Rashi and Maimonides: How Three Rabbis Revolutionized Judaism
King Sennacherib and the Siege of Lachish
Three Small and Easy Changes to Add Positivity in Your Home
Comments