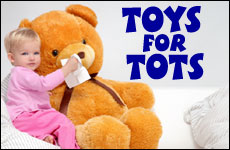 Stumped as to what you should get your toddlers for Chanukah? Here’s some unhelpful advice.

It’s hard to figure out what to get small children for Chanukah. I mean, regular-sized children always know exactly what they want – they want the toy that’s been advertised relentlessly on TV when the manufacturer should have maybe put some of that effort into making enough copies of the toy. But very small kids, such as toddlers, have no idea what’s out there. Maybe they should watch more TV.

It’s hard to figure out what to get small children for Chanukah.

So what do you get your toddler? Not Chanukah gelt, that’s for sure. It has to be something age-appropriate. Most toys have some kind of age-related label on the box, although often that label has less to do with what age child will actually enjoy the toy and more to do with protecting the manufacturer from lawsuits. Someone once gave us a generic-brand toy that consisted of four large blocks that stuck together magnetically – a toy that was clearly designed for a child of no more than six months – and the label on the box said “4 years and up”.

“No. Go play with your blocks.”

Also, some toys go a little overboard with the ages. They say things like, “Ages 3 to 100”. A hundred? What happens after that? Are older people choking on the pieces?

“No. Not without my glasses.”

Also, there are a lot of toys to pick from these days, and you can’t even narrow it down by gender. It used to be that girls would play with dolls, and boys would play with cars. But now that’s not necessarily true. When our oldest daughter was little, I was in charge of buying her toys, seeing as I’ve never quite grown up, and I didn’t buy her a whole lot of girlie toys. I mainly bought toys that I wanted, such as cars. “Why do cars have to be for boys?” I figured. “Girls drive cars too!” And then we sat back and watched her play with them: She lined them up by size and said, “This is the daddy car, this is the mommy car, and this is the baby car.”

“Okay,” you’re saying. “But what if my son plays with dolls?”

Then he’ll be a good father. Boys also have children, eventually; it’s not just girls. Also, my sons play with stuffed animals all the time. They use them for pillow-fights. I think we have to have a talk sometime before they have actual children.

So here are some ideas of what to get small children. You can read the list, but if I were you, I would just get something that has a nice, sturdy box that your child can play with, because that’s all he really wants anyway. Also, he’s probably not even aware that it’s Chanukah.

There are basically three categories of toys:

Beware of boys and Lego. Anything he builds will end up being a gun.

Toys you can build things with: For example, there are those enormous physical-therapy Legos. Legos are designed to encourage creativity and third-dimensional thought, but mainly your child will use them to build guns. Occasionally someone will build a house with no doors or windows, but mostly they’ll build guns. (Basically, if you give your child anything that resembles or can be made to resemble a weapon, he’s going to spend a lot of time pretending to shoot and hurt people, and little boys are not great at judging distance.)

You can also get your child Tinker-Toys or Lincoln Logs, but most small children don’t really have the patience to build anything with those, so you’re basically getting them an entire box of swords, and you’re going to find yourself confiscating them, one piece at a time, every other day for the next nine years. You can also give them blocks, but blocks are just broken Legos held together by gravity, and no one ever builds with those either, because if you make anything more than two blocks high, your brother will come along and knock it over.

Toys that let you pretend to do grown-up things – such as cash registers, because that’s definitely a career we want them to start training for when they’re two. (“I can’t believe you still don’t know the basic medical terms. ‘Boo-boo’? Seriously? At this rate, you’ll never be a doctor. Here, have a cash register.”) There are also little tool sets, fake food, little vacuum cleaners, and little brooms and dustpans, which, ironically, I always find myself picking up off the floor. And remember those lawn mowers that blew bubbles? What was that about?

Also in this category are riding toys. When I was growing up, every family was legally required to have one of those red cars with a yellow roof – the Cozy Coupe – which looks like something you get when you have a Mommy car and a Daddy car. The way you play with those is that you run outside and jump in, and your brother gets in from the other side, and then you both shriek until your mother breaks you up, because no one wants to give up the car. Then there are the:

Toys that Say Things – And they’re usually not intelligent things. Sure, they look cute in the store when you squeeze their hand and tickle their tummy, and then you decide to do the same thing to all the toys in the display so that they’re all dancing slightly off unison and knocking each other off the shelves, but then you bring them home and realize that they always say the same three phrases, and the dance moves were only fun when there were thirteen of them doing it.

That’s how they get you.

Also, we now have toys that, when the child walks away in middle of playing with them, will clear their throats and say, “Excuse me!” to remind the child that -- Hey, weren’t you playing with a toy a minute ago? Basically, it works on Jewish guilt. If the child still doesn’t go back to the toy, it says, “Fine! Don’t play with me. I’ll just sit here. All alone.”

“Yeah, but the toy can say things! Isn’t that great?”

Nah. You can say things. I’d rather get a toy that does things I can’t do, such as turn into a robot.

I’m not saying there’s no use for noisy toys. For example, let’s say you have a sibling that always annoyed you growing up -- he always knocked over your blocks, or used your cars as roller skates. So these are great toys to get for his kids. And if you don’t want to spend that much money on his kids, there are lots of cheaper things you can get that make just as much noise, such as a whistle, or anything with a siren. You can also get a classic toy called the Fisher Price Corn Popper, which is basically a stick that also makes noise. That’ll teach him to never let you use the Cozy Coupe.