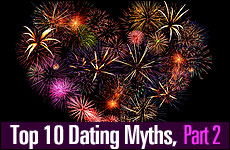 Does love conquer all?

6. Sparks need to fly as soon as we meet. No they don't. I am proof of this. There weren't sparks when I first met my wife, Karen. Maybe a flicker but certainly not a raging fire and here we are 23 years and seven kids later in a spark-filled marriage.

People get this notion that it needs to be love at first sight thanks to the movies. It always amuses me that people would actually use Hollywood as their guidebook for relationships. There is probably no greater industry or place in the world that is so out of touch with the true nature of what makes relationships work. So ignore this Hollywood-created myth and almost everything else they have to say about life and realize that they are in the entertainment business and not a very good source for wisdom or tips about creating a happy marriage.

7. You can go it alone. Everyone is familiar with the Jewish figure of the Matchmaker. Many have a dim view of matchmakers who are usually portrayed as busy-body talkative yentas who are only interested in notching a few more shidduchim, matches on their belt despite the welfare of the young people whose interest they are supposed to represent.

The fact is that dating and coming to a decision as to whether someone can be a true life-partner desperately needs an outside objective party.

Again, I am proof of this as well. After meeting Karen and the above-mentioned lack of fireworks, bells and whistles I was ready to give it up after the third date. After relating this to the rabbi whom I used to speak to about these matters, he asked me what I liked about her. I gave him a list of things and he then said the line that changed my life: "Funny, I don't recall you ever speaking so positively about any of the women that you have gone out with before." Hearing those words forced me to listen to myself and not be distracted over the missing sparks at the outset.

So it is quite crucial to get an outside opinion from a close friend or confidant to ensure that your decision to marry or not is a good one.

8. I will change him/her. I have some sad news: People don't change. You might successfully modify a behavior here and there, but when it comes to a person's basic personality, well I will just let the song spell it out for you...

So do yourself a favor, and whatever faults you see in another, make a decision: Either the fault is a deal-breaker and discontinue the relationship because of it, or accept it and know you will most likely live with it for the rest of your life. But don't fall into the trap that you will change this person. It seldom happens.

9. Love conquers all. Rabbi Nachum Braverman has a great definition of marriage. Two people committed to each other's welfare, good and pleasure and secondly committed to common life goals. When a couple is first dating and it is exciting and electric, they are doing really well in the first part of this definition as they share lots of intense good times together.

But couples do not pay enough attention to the more sober second part of this definition – the common life goals part. Too many young people think that because they have the good times, then any obstacles will easily be overcome. This is simply not true. As a couple ages and the marriage loses some of its excitement, frustration and tensions are bound to set in and destroy a marriage if they are going in two different directions because of differing objectives.

So yes, be a romantic. But not to the point where you become blinded to the realities of the other person's life goals which may be very different than your own. Don't subscribe to this false notion that your love will conquer any and all significant differences; there is a good chance you may not win that battle and the collateral damage will be painful.

10. You can go it alone, Part 2. Not only do you need others to help you find the right one, but it's a great idea to get God on your side as well. Everyone who is married has some sort of story of how they met and the unique and often unusual circumstances that brought them together. So do pray and not for any particular person, but rather ask that God bring you the right one and the He give you the insight and awareness to see it.

Good luck and don't forget to invite me to your wedding!

How To Survive Getting Dumped

Getting to “I Do”