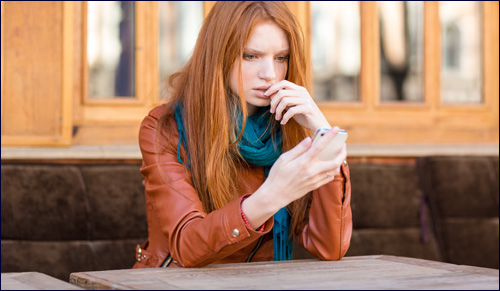 Yes, breaking up is hard to do, but if you want to end a relationship it’s a must.

Emily is an attractive and smart young woman working as an assistant DA in New York. After going on Birthright, she began taking classes and attending programs at the Birthright Alumni Center in NYC where I have worked for the past 11 years.

After meeting a guy at one of my Friday night dinners, Emily began dating him and things started to go well. A flurry of calls, texts, and dates happened between Emily and David, and as a 30 year old woman ready to begin a family, Emily was excited that this could be the one.

Until David disappeared, or as it's commonly called, ghosted.

Ghosting is when a guy or a girl decides after dating a week, month or even years (yes, I know people that has happened to) cuts off all communication without a rhyme or reason. No more calls, texts, WhatsApp messages, and to top it all off an unceremonious block on Facebook, the ultimate shock horror insult.

Why do people resort to ghosting? From my discussions with hundreds of young men and women who have ghosted in dating, the key reason is that they would rather disappear off the face of the earth than deal with the reality of a real relationship break up. Simply put, they are cowards who actually believe they are doing their partner a favor by not "hurting" them with a long drawn out break up.

"It's too much for us to deal with the fallout from a broken relationship," people tell me, "so better we just cut off from each other and move on." They don’t appreciate the irony of only one person having the pleasure of moving on while the other party lives in self-doubt, lacking of closure and wondering for an untold amount of time, "What did I do wrong?"

Emily, and many guys and girls like her are left hanging, trying to figure out whether his ghosting is a phase and he'll be back soon enough, or whether it's time to renew their dating profile and get her thumb ready for more JSwipe activity. After much heartfelt discussion and introspection, Emily eventually moved on. Learning from her previous mistakes in allowing the relationship to go on for too long, she is currently engaged and planning a wedding for the end of the year.

The Torah teaches, "Love your neighbor like you love yourself" (Lev. 19:18). If you wouldn't want the person you're dating to just disappear without warning, then you shouldn't do it either.

Yes, breaking up is hard to do, but if you want to end a relationship it is something you must do. Do not ghost. If you want to be good to your partner and true to yourself, then break up in the following way: don't text, call, or email your thoughts. Make a date to meet for coffee or on a park bench and talk straight, face to face about what you are going to do. There is no easy way to do it, but sometimes life is uncomfortable. Date well, and break up well too. You won't regret it.

Originally from London, England, Rabbi Lawrence Hajioff graduated with honors in political science from Manchester University. After working for MTV in news production be studied in Israel and then NY for his rabbinical ordination. Rabbi Hajioff was the educational director of Birthright Israel in NY, and is on the full time faculty of Stern College for Women at Yeshiva University. He is currently a senior lecturer for Chazak NY. His very popular books, Jew Got Questions and Will Jew Marry Me? were best sellers. His latest book "The Future - The Jewish Messiah, Israel and the End of Days" is available online at Amazon.com and in stores now. Rabbi Hajioff lives in Wesley Hills with his wife Anita and their five children.

Getting Ready for Intimacy

Dating Someone from Another Country