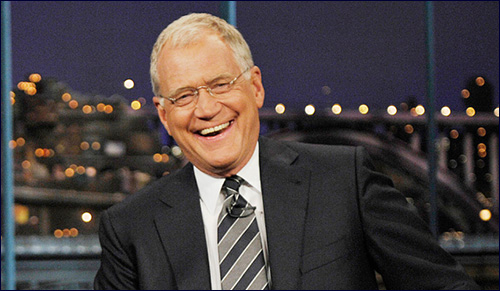 His last name ends with “man.” That's also why we think Superman is Jewish.

Late night talk show host David Letterman’s final episode is May 20th, 2015. He began hosting late night television in 1980 and became the longest serving late night talk show host in television history. He is famous for his acerbic wit and his quirky bits including stupid pet tricks and his Top Ten lists. Interestingly, David Letterman is also somewhat famous for people mistakenly believing he’s Jewish. For the record: he’s not. What Jewish mother would not have staged a serious orthodontic intervention for that gap in his two front teeth?

What Jewish mother would not have staged an orthodontic intervention for that gap in his two front teeth?

(By the way, if you need some help honing your “Jewdar”, take the Jewlarious Jew/Non Jew Quiz here).

Anyway, in honor of Dave’s retirement, we at Jewlarious thought it would be fitting to put together the…

10. His best friend is a bald guy who plays the piano.

9. He loves pastrami on rye.

8. Over his career he diversified and formed a production company called Worldwide Pants that produced among other shows, Everybody Loves Raymond. C’mon, we Jews invented diversification.

7. Jews think anyone whose last name ends with “man” is a member of the tribe. This is why we also think Superman is Jewish.

6. He appeared on an episode of Comedians in Cars Getting Coffee where he schmoozed with his good friend Jerry Seinfeld while they had a nosh and kibbitzed. That’s pretty Jewish.

5. During the writer’s strike in 2007/2008 Dave grew a long beard as a symbol of solidarity with the writers. Some reports indicated that he grew peyos as well.

4. He famously bombed as host of the 67th Academy Awards, later remarking, “I buckled under the pressure of having all of Hollywood’s elite in one room with their attention focused on me. Now I know how Steven Spielberg’s son felt at his Bar Mitzvah.”

3. After making a joke about the killing of an Al-Qaeda leader, he received death threats from Muslim militants. Welcome to the club, Dave!

2. He has one son named Harry. C’mon – Harry Letterman. His name might as well be Moishe Applebaum!

1. He’s a Jewish comedian from New York – and excluding Chris Rock, aren’t they all Jewish?