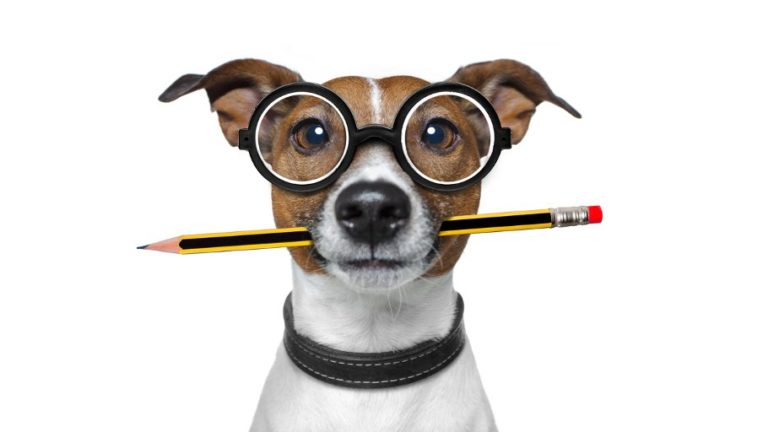 1. This Dog Can Daven

A man went to visit his friend Chaim Yankel because he heard Chaim Yankel had a very special dog. Sure enough, when the man arrived, he was astonished to find the dog davening beautifully, the entire Yom Kippur service.

The man watched in astonishment for a while then said "I can hardly believe my eyes!" he exclaimed. "This must be the smartest dog in the world!"

"Nah, he's not so smart," Chaim Yankel replied. "He’s davening the Sefardi Yom Kippur service, but we are Ashkenazi."

2. College is for the Dogs

A dog named Moishe is so smart that his master, Chaim Yankel, decides to send him to college.

Home for vacation, Chaim Yankel asks him how college is going.

"Well," says Moishe the dog, "I'm not doing too great in science and math, but I have made a lot of progress in foreign languages."

"Really!" says Chaim Yankel. "Say something in a foreign language."

The Rosenberg family dog had been deaf and blind for years. When she started to suffer painful tumors, it was time to put her down. Mrs. Rosenberg gently tried to explain this to her seven-year-old son Moishie, who was taking this all pretty hard. Moishie asked if “Jazzy” would go to heaven.

“Well I’m not 100 percent sure that dogs go to heaven,” said Mrs. Rosenberg, “But if they do, then I’m sure she would be healthy again and able to do her favorite thing: chase squirrels.”

Moishie thought about that for a minute, then said, "So dog heaven must be the same as squirrel hell."

Abe and Irv were neighbors in a Florida retirement community, and both proud pet owners.

“My dog is so smart,” Abe bragged, “that every morning he waits for the paperboy to come around. He brings the kid his tip and then brings me the paper, along with my morning medicine.”

“How could you know?” asked Abe.

“Because my dog told me.”

A guy is driving around suburban Jerusalem and he sees a sign in front of a house: "Talking Dog For Sale." He rings the bell and the owner tells him the dog is in the backyard. The guy goes into the backyard and sees a Labrador retriever sitting there.

The dog looks up and says, "Well, I discovered that I could talk when I was pretty young and I wanted to help out. So I told the Mossad about my gift, and in no time at all they had me working flat strap, sitting in rooms with spies and world leaders and suspected terrorists, because no one figured a dog would be eavesdropping. I was one of their most valuable agents for eight years running. But it was exhausting work and really tired me out. I knew I wasn't getting any younger and I wanted to settle down. So I signed up for a less stressful job at Ben Gurion airport to do some undercover security work, mostly wandering near suspicious characters and listening in. I uncovered some incredible stuff and was awarded a batch of medals. During that time I got married, had a mess of puppies, and now I'm just retired. And pretty much, that's it."

The guy is amazed. He goes back in and asks the owner what he wants for the dog.

"This dog is amazing. Why on earth are you selling him so cheap?"

"Because he's a liar. He never worked for Mossad!"

At the Israeli race track near Afula, a group of horses are talking. One of them starts to boast about his track record. "In the last 15 races, I've won 8!"

At this point, they notice "Moishe" the greyhound dog who has been sitting and listening. "I don't mean to boast," says the greyhound, "but in my last 90 races, I've won 88 of them!"

The horses are clearly amazed. "Wow!" says one, after a hushed silence. "A talking dog."

7. The Dog and the Butcher Shop

Selma Epstein made a trip to Cohen’s butcher shop every Thursday in preparation for Shabbat, and one Thursday she saw something most peculiar – a dog walked right into the butcher shop.

"What’ll it be today?" the butcher asked the dog. "Brisket?"

The dog shook his head.

The dog shook his head.

The dog wagged his tail excitedly.

The butcher wrapped up two pieces of lamb, gave them to the dog and the dog trotted out. The same thing happened the following Thursday and Mrs. Epstein was so intrigued that she decided to follow the dog out of the shop. She saw the dog walk up the steps to a house, stand on his hind legs and ring the doorbell with his nose. A man answered the door and immediately started shouting angrily at the dog.

Mrs. Epstein was incensed. "You should be ashamed of yourself," she told the man. "That is the cleverest dog I've ever seen. He goes to the butcher's, fetches your food, brings it home and rings the doorbell. And you treat him like that!"

"That may be," said the man, "but it's the fourth time this month that he's forgotten his key."

8. Israel is for the Dogs

A Jewish woman wants to take her dog to Israel, so she goes to the travel agent to find out how. He says, "It's easy. You go to the airline, they give you a kennel, you put your dog in it, when you get off at Tel Aviv go to the luggage rack, and there's your dog.

So she does, gets off at Tel Aviv, goes to the luggage rack, no dog. She goes to the lost and found, says, "Where's my dog?" They look all over the airport for it, and find the dog in another terminal. Only the dog is dead.

"Oh, my gosh, they say, we killed this woman's dog. What are we going to do?"

Then one says, "Wait a minute, it's a cocker spaniel. They're common dogs.

There's a pet shop across the street from the airport. We'll get the same size, shape, color, sex. She'll never know the difference."

They bring the woman the other dog but she says, "That's not my dog." Laughingly and making light of it they say, "What do you mean that's not your dog?"

To which she responds, "My dog's dead. I was taking it to Israel to bury it."

9. A Dog Named Moishe Walks into a Bar

A guy walks into a bar with his golden retriever. He tells the bartender, “I got a Jewish dog named Moishe. He’s so smart he actually talks. Can I get a drink on the house if my dog talks for you?''

''Dogs can't talk, pal,” replied the bartender, “but if you can prove to me yours does, I'll give you a drink. If not, well, let’s just say you don’t wanna find out.''

''Roof!'' The man turns and smiles at the bartender.

''What the heck you tryin' to pull, mister?'' said the bartender.

''Okay, okay," says the man. "One more question. Okay, Moishe, tell me – who is the greatest ball player who ever lived?''

The bartender had enough and picked up the guy and his dog and threw them onto the sidewalk outside of the bar.

Moishe stands up and looks at his owner. "Wow. Maybe I shoulda said DiMaggio?"

Little Moishie Epstein’s dog Benji was sick and the boy was afraid that his dad would come back from the bet with bad news.

As his dad stepped through the door with Benji in his carrier, Moishie rushed to find out what the vet had said.

"I'm afraid it's not good news, son," said his father. "The vet thinks Benji's only got another three weeks or so to live."

Hearing this, Moishie burst into tears.

"But Benji wouldn't want you to be sad," said the father, putting a comforting arm around Moishie's shoulder. "He'd want you to remember all the good times you had together."

Moishie rubbed his eyes. "Can we give Benji a funeral?"

"Sure we can," said his father.

"Can I invite all my friends?"

"Of course you can."

"And can we have cake and ice-cream?"

"Sure, you can have whatever you want."

Jewish Communal Traditions Under Quarantine
Olivia Newton John’s Grandfather was a Nobel-Prize Winning Jewish Physicist
Don’t Believe in Other Gods Versus God is One
Seeing Without Eyes
Comments
MOST POPULAR IN Jewlarious
Our privacy policy
Aish.com Is Looking for Great Writers