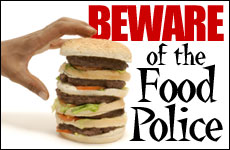 Some cities mandate restaurants to post calorie contents. I hope that kosher establishments are exempt.

I'm very sorry to report that the Food Police may be headed to your town soon, forcing you to face the potentially shocking facts about what you eat each day.

It's already happened here, in sunny Southern California. Officials in Los Angeles have decided to copy the apparatchiks in New York City by mandating that chain restaurants post the calorie counts of their menu items where customers are sure to see them, preferably right on the big menu boards. Once this takes effect, the earthquakes won't be the only things rattling the public's nerves anymore.

On one hand, kosher consumers like me can breathe a little easy on this one, since we wouldn't be caught eating in those treife places even if we were faint with hunger. Hey, if a Big Mac with a medium fries clocks in at 920 calories, not even including a drink, it's not my problem! But I worry that this "information creep" will eventually hit us where we live, in the kosher pizza joints, the Shabbat Kiddush, and the wedding smorgasbord. It could happen! After all, California's uber-fit governor, "Ahnold" Schwarzenegger, has already issued a warrant out for the immediate arrest of every trans fat in the state.

By the year 2010, if you're a trans fat in California, you'd better grab the rest of the Doritos in the family and make a run for the border. Even more draconian "Don't ask, we'll tell" food disclosure laws are set for Seattle, San Francisco and other cities. Those restaurants will have to reveal not only calories, but also sodium, carbs, fats and cholesterol. Look, I'm no defender of trans fats or 1,000 calorie fast-food lunches, but if I want to do all that reading when I'm dining out, I'll bring a book, thank you very much.

If I want to do all that reading when I'm dining out, I'll bring a book, thank you very much.

I can only hope that kosher restaurants, synagogue kiddushes, and Jewish events will be exempt from these intrusive laws. Frankly, we Jews have enough problems, such as wild-eyed Iranian leaders boasting of their plans to erase Israel from the map, getting people to stay quiet during the rabbi's talk in shul, and the skyrocketing cost of day school tuition.

The last thing we need as we spear a potato knish at a bar mitzvah is some government do-gooder showing up and announcing, "We're from the government, and we're here to help. And by the way, according to my chart, did you know that little knish has more than 230 calories?" Adding insult to injury, the government do-gooder will mangle the pronunciation of "knish," giving it a jarring two syllables.

Jews don't need this kind of tsuris. And as usual, the government "experts" who predict that all these in-your-face calorie counts will start slimming down the ranks of those of us whom my Nana would have sympathetically called "zaftig" (plump) fail to see the unintended consequences of these laws. After all, which is worse: i a mega-calorie lunch or dinner, or having a panic attack or sudden-onset depression after discovering that your favorite meal in the entire universe will set you back by 700, 800, or more calories?

On the other hand, kosher food doesn't exactly have the best nutritional track record. Let's be honest: When's the last time you had a hunk of chocolate babka that was made with only egg whites, sugar substitute, and flax seed? When's the last time you had a bowl of steaming cholent that didn't have the maximum allowable cholesterol content for the entire population of Fiji for a month?

So don't misunderstand: I'm not suggesting that we ought to turn a deaf ear, a blind eye, and as many other clichés as possible toward knowing what we are eating. Even the Torah tells us that we are obligated to take care of our bodies, which is something you might not realize the next time you belly up to the Vienese table at a wedding, or in a yeshiva where the most vigorous exercise the students get is by vigorously gesticulating over a challenging piece of the Talmud.

In yeshiva, the most vigorous exercise is to vigorously gesticulate over a challenging piece of the Talmud.

But Judaism also values privacy. Therefore, calorie, fat and cholesterol counts, which can traumatize the system, ought to be absorbed in private. (In my experience, it may also help to keep a box of tissues nearby.) This approach has many benefits, including not keeling over in shock at the Vienese table, possibly right into the tiramisu. As King Solomon advised, there is a time and a place for everything, even boning up on calorie counts.

Weddings, bar mitzvahs, and evenings out at your favorite kosher eatery are not those times. We probably do need a reality slap about nutritional information, but only under controlled situations, such as the privacy of a Weight Watchers meeting, or with our therapists. A little bit of knowledge can be a depressing thing.

As for me, I'm heading back to the kitchen now to cook for Shabbat, making sure to lighten up every recipe I can. But when Shabbat comes, I'm going to enjoy it all, in moderation, of course. Besides, I'm pretty sure that the magic of Shabbat helps us all automatically burn more calories, even if all we're doing is reaching for another potato knish.

Thanksgiving Exclusive: A Jewish Turkey Pleads for Its Life

My 10 Predictions for the Jewish World in 2017
The Promise Of The Land
Which Chat Are You On?: Parshas Behar/Lag Ba’Omer
Do You Like Slow-Cooked Food? Thank the Jews
Comments