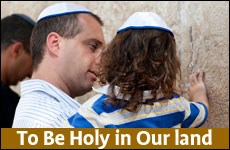 After returning to Israel, why continue to mourn the destruction of the Temple?

After the creation of the State of Israel, the reunification of Jerusalem in 1967, and the influx of Jewish immigrants from the four corners of the earth, is it possible that Jews continue to mourn the destruction of the Temple as if nothing had happened in the interim?

At the simplest level, the question would seem to be based on a false premise: that we are a sovereign people in our Land. The clearest evidence to the contrary comes from the site of the Temple itself. Though the Temple Mount has ostensibly been under Israeli control since 1967, successive Israeli governments have stood by helplessly while the Muslim Wakf has worked unimpeded to destroy archaeological evidence of the Jewish presence on the Temple Mount.

Thousands of tons of dirt were unceremoniously dumped.

After receiving permission to build an emergency exit to the larger mosque. the Wakf took advantage to excavate an enormous hole from which thousands of tons of dirt were dumped unceremoniously into the Kidron Valley. A three-foot long stone fragment found among the rubble was, according to one archaeologist, "the most important artifact ever recovered from the Temple Mount…"

The massive building campaign of the Wakf has been conducted in clear contravention of the Antiquities Law, which requires archaeological supervision of all work conducted at ancient sites.

The Jewish nation is the only one to have received its law prior to possessing a land. The law-giver Moses never entered the Land. Prior to our entry into the Land, Moses warned against falling prey to the illusion that our prosperity was a function of our own military prowess or our own cunning.

"Judah was sent into exile because it prized land and soil as the bulwark of its freedom and belittled the Torah," writes Rabbi Samson Raphael Hirsch. Each time the Jewish people returned to their Land, they were tested anew to see whether they had learned from the experience of exile. Would they, as soon as their feet touched the earth, once again begin "revering as gods... the political independence, the social freedom and the civil rights that this soil provides... committing afresh the old sins that brought upon it the destruction of its state and Temple."

We were granted land and independence in order to become a "holy nation" that would be a light to the nations. Israel's achievements in many areas – medicine, military, high-tech – are nothing short of remarkable for such a small country under constant external threat from the moment of its birth.

Yet not for these did we pray. We prayed for the opportunity to create a society that would reveal to the world the transcendental dimension of life. A holy people striving to model a holy life and live with the awareness of God.

In this regard we have in large part failed.

Israel has one of the widest income gaps in the Western world. Our school system has one of the highest rates of violence. Not surprisingly, Israeli teenagers, according to the World Health Organization, are the unhappiest in the world. Their lives lack a sense of purpose or meaning. Sadly, the list could go on.

Our problem is not that we mourn our current situation too much, but that we – all of us – mourn too little for what we are lacking.

"They shall make for me a Sanctuary so that I may dwell among them" (Exodus 25:8). The verse does not say "in it" – i.e. in the Sanctuary – but rather "in them." Each of us is a microcosm of the Temple.

And just as God promised the Jewish people that even in exile, He would never allow them to be destroyed completely, so too the spark of His presence is never fully extinguished from our hearts.

When we cry for the Temple, we rectify the estrangement, both collective and individual.

Our biblical ancestors cried in the desert on the night of Tisha B'Av. Those tears expressed a feeling of estrangement from God, whom they were convinced by the Spies hated them for their former idolatry and was bringing into them into the Land in order to wipe them out at the hands of far stronger nations. Because they cried needlessly out of a failure to recognize God's love, their descendants were doomed to cry on that same night for millennia.

But if those original tears brought destruction and exile, our tears today are the corrective. When we cry for the Temple, or for our alienation from the inextinguishable point of divinity within us, we rectify the estrangement, both collective and individual.

"All those who mourn for Jerusalem," say our Sages, "will one day see her in her rejoicing." May it be soon.

A Land Devoid of Peace

Warsaw Ghetto Furniture
Where Are We? The Body, Brain, Soul Problem
Dr. Sheila Nazarian’s Escape from Iran
The Miami Boys Choir is Taking over TikTok
Comments
MOST POPULAR IN Israel
Our privacy policy
Aish.com Is Looking for Great Writers