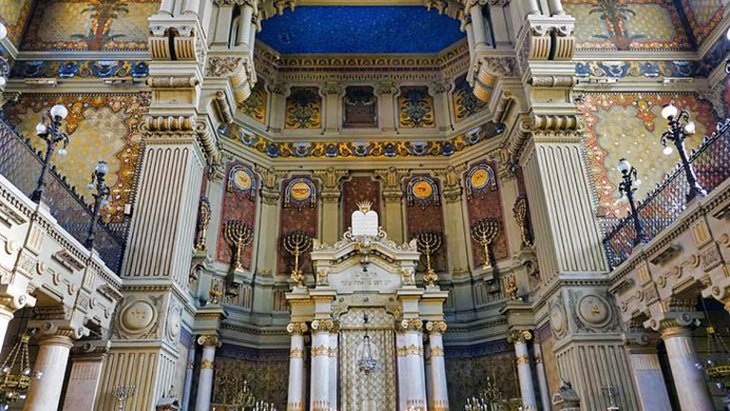 My cruise back into Jewish history.

A voyage on the Mediterranean offers Jewish travelers a chance to see some relatively little-known sites that shed light on the survival and resilience of Jewish life dating back thousands of years to Roman times.

I recently set sail on a 10-day, seven-country “Aegean Adventures” cruise on the luxurious Regent Seven Seas Voyager. We started in Barcelona and ended in Athens, with stops along the way in France, Italy, Malta, Turkey and the Greek island of Santorini.

In three of the stops on the itinerary – Barcelona, Rome, and Ephesus, Turkey – I had the chance to visit Jewish-related sites and learn more about the ups and downs of Jewish existence in this part of the diaspora.

Just a five-minute walk from the city’s famous Las Ramblas promenade, is the former Jewish quarter that once was home to Barcelona’s thriving Jewish community. Amidst the small and winding streets and medieval architecture, sits what some believe to be the oldest synagogue in all of Europe – the Sinagoga Major de Barcelona.

According to historians, Jews began moving to Barcelona after the destruction of the Second Temple in 70 C.E. They settled in an area of the city known as El Call, believed to have come from an old Catalan word derived from the Hebrew word kahal (community).

The Sinagoga Major, located on a street called Carrer Marlet, is in a building dating back to the third or fourth century. It’s unclear if it was initially used as a synagogue. However, one of its excavated walls has a carving of 18 in Roman numerals, a spiritual number in Judaism. Some suggest the carved number offers evidence of the building’s ancient Jewish roots. The building also was built with an eastward orientation toward Jerusalem, in contrast with other buildings on the street. 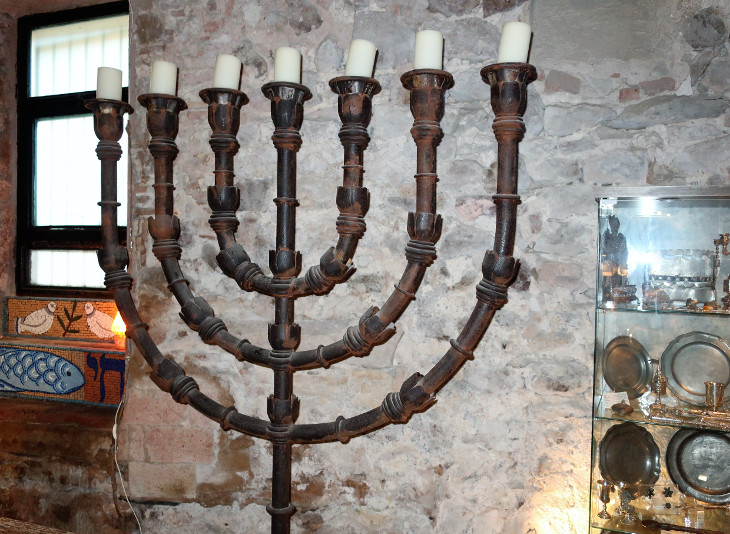 The synagogue was significantly expanded during the 13th century. At that time, Jews comprised up to 20 percent of Barcelona’s population. Tragically, in 1391 the Black Plague decimated the city. Jews were blamed and most were either murdered or forced to convert to Christianity.

An Argentine businessman with Catalan roots purchased the building in 1996 before it was to be demolished by the city. Restorations began and Sinagoga Major reopened as a museum in 2002.

One room features ruins from the Roman era; the other has a small sanctuary with a menorah, a 500-year-old Torah scroll – donated by a New York attorney – and other Jewish artifacts. Tours are given in English, Spanish and Hebrew. There are no formal services held in the synagogue. However, it is used for special events like weddings and bar mitzvahs.

Sinagoga Major is not easy to find. The Jewish quarter is a maze of streets not clearly marked and we needed to ask for directions several times before finding the building. But it was well worth the effort to see a site with such religious significance and historical magnitude. 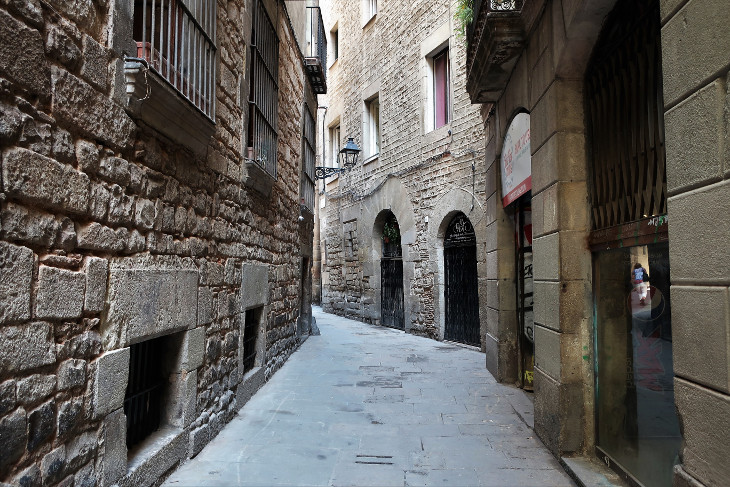 The Jewish Quarter of Barcelona

Over the years, the Jewish community in Barcelona has seen a mild resurgence. In 1918, the Jewish population was estimated at just 100. n subsequent years, Jews arrived from such places as Turkey, Greece, South America, northern Africa and Israel.

Today, the city’s Jewish population has grown to about 5,000, and there are four working synagogues. We visited the largest – the Orthodox Cominidad Israelita de Barcelona Synagogue. Located in a residential area in a building dating back to 1954, it was the first free-standing synagogue built on the Iberian Peninsula since the Jewish expulsion in 1492. The synagogue houses both Sephardic and Ashkenazic sanctuaries. Security is tight, so if you’d like to attend services, it’s best to contact the synagogue in advance: info@cibonline.org

A visit to the Eternal City rewards Jewish travelers with a must-see look at the oldest Jewish community in Europe and one of the oldest continuous Jewish settlements in the world.

It’s believed that a Jewish presence in Rome dates back to 161 B.C.E., when Jason ben Eleazar and Eupolemus ben Johanan were sent as envoys of Judah Maccabee. While the treatment of Jews by the Romans in Palestine was often harsh, relations with the rulers in Rome were generally much better. But once Christianity became the official religion of the Roman Empire, Jewish rights eroded. During the Middle Ages, treatment of the Jews varied from pope to pope. 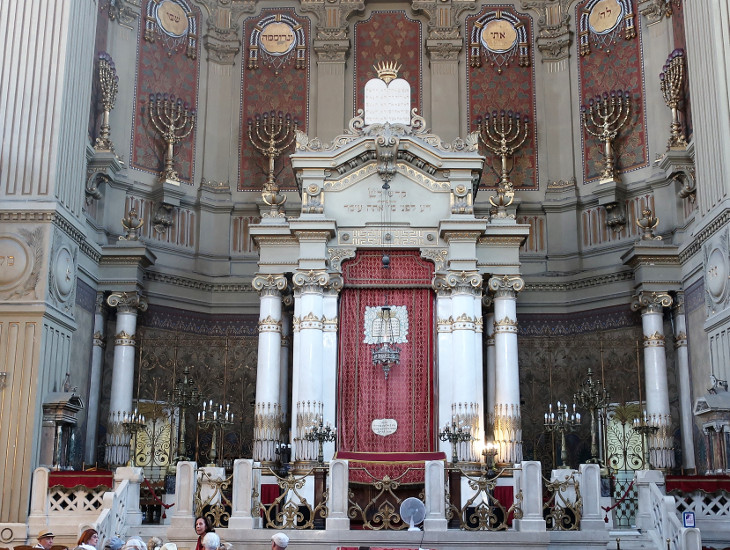 The beautiful interior of the Great Synagogue of Rome

Like most ships on Mediterranean itineraries, the Seven Seas Voyager docked in the Italian port city of Civitavecchia, a 90-minute drive from the heart of Rome. We had the option of taking a tour of “Jewish Rome” organized by the ship, but opted instead to do it on our own, using one of several “hop-on-hop-off” bus lines that follow the same route past the city’s main sites.

We exited the bus at the Piazza Venezia stop and walked about 10 minutes to the “Ghetto Ebraico,” which is clearly marked on city maps. The Jewish Ghetto dates back to 1555, when Pope Paul IV restricted Jews to this small area of the city, which was then surrounded by a wall. Following the unification of Italy in 1870, Jews were granted citizenship and the Ghetto was eventually abolished.

It was easy to figure out when we had reached the former Ghetto. There were several kosher restaurants in the main square, catering to the large number of Jewish tourists coming to see the nearby Great Synagogue of Rome and the attached Jewish museum.

The Great Synagogue is a beautiful building that opened in 1904. Containing elements of Assyrian-Babylonian, Egyptian and Greco-Roman architecture, the building’s aluminum dome is the only square dome in Rome. The Jewish community of Rome wanted an eye-catching building that would represent a visible symbol of the community’s freedom after centuries of hardship. They succeeded.

For an 11-euro admission fee, we entered the two-story synagogue. Security is extremely tight; there was a Palestinian terrorist attack here in 1982 which resulted in the slaying of a 2-year-old boy. 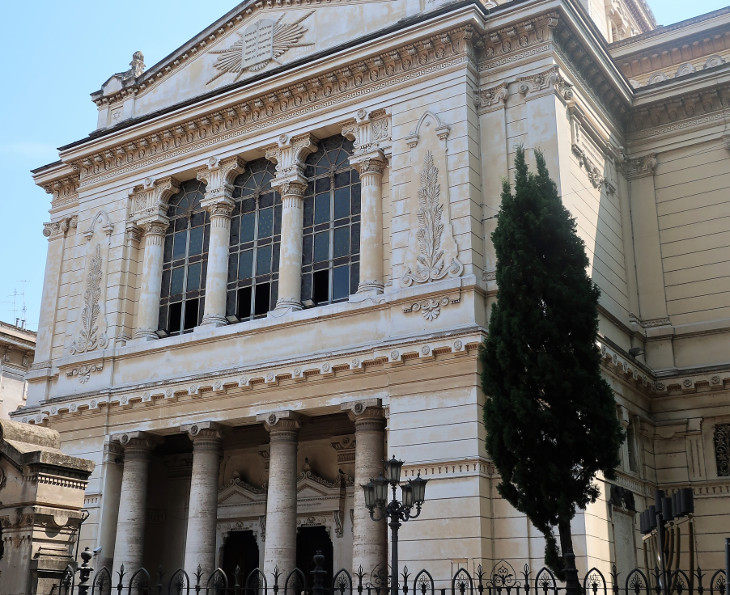 The exterior of the Great Synagogue

We were given a brief tour of the synagogue’s stunning interior. Our visit came on a Friday morning and while we sat in the sanctuary, a cleaning crew readied the synagogue for that evening’s Shabbat services. We were surprised to learn that the Great Synagogue is just one of 18 working synagogues in Rome, although most are quite small. There are an estimated 15,000 Jews now living in Rome. 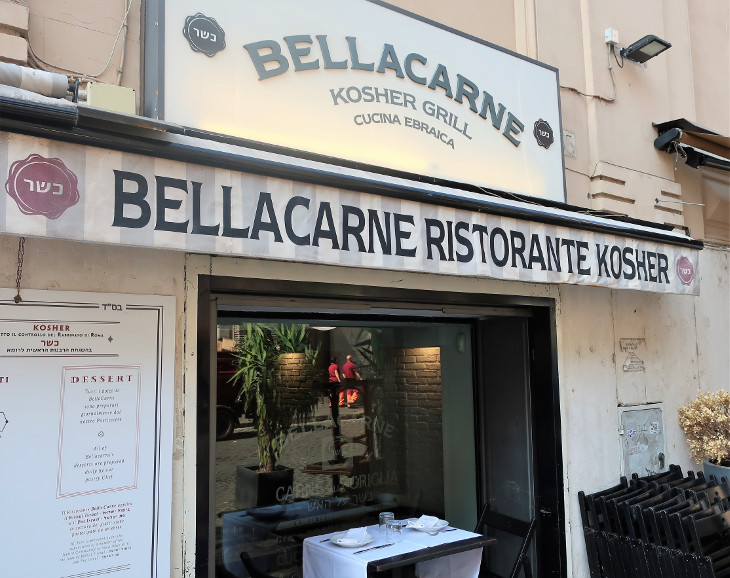 The admission fee to the synagogue also includes entrance to the attached Jewish Museum of Rome, which chronicles Jewish life in Rome throughout the centuries. Established in 1960 as a room behind the Torah ark in the synagogue, the expanded museum moved to its present location adjacent to the synagogue in 2005. We were especially impressed with the extensive collection of Jewish art on display.

The synagogue made headlines in 2016 when Pope Francis visited and gave a speech rejecting all forms of anti-Semitism and calling for “maximum vigilance” to prevent another Holocaust.

After a wave of terrorist attacks in 2016 that had a severe impact on tourism, some of the cruise lines – including Regent Seven Seas – are now slowly starting to return to Turkey. One of the most popular port stops is the city of Kuşadasi, located on Turkey’s western coast on the Aegean Sea. Kuşadasi is just a 30-minute drive from the famous Roman ruins of Ephesus.

One of the world’s most impressive and best-restored archaeological sites, Ephesus was the former capital of Asia Minor and was first built about 3,000 years ago. In the Roman Empire, the city was considered second in importance only to Rome. 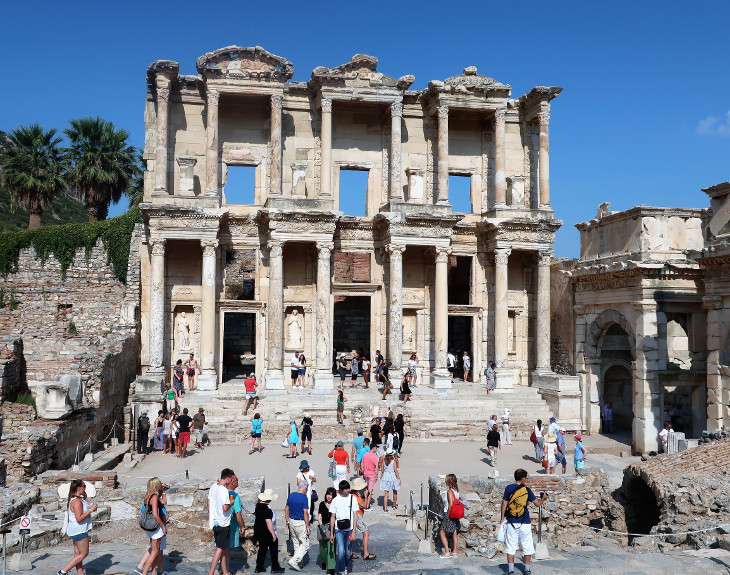 Ephesus reached its height in the second and third centuries, when it was home to nearly a quarter-million people. Over the centuries, Ephesus was visited by such dignitaries as Alexander the Great, Julius Cesar, Mark Anthony and Cleopatra.

It is believed there was a substantial Jewish community living in Ephesus since at least the 5th century B.C.E. Only about 20 percent of the city has been excavated; archaeologists think there is a synagogue that has yet to be discovered.

Unfortunately, there is currently little visible evidence of Jewish life in this ancient city. However, there is a barely visible carving of a menorah on the marble steps in front of one of its most famous and popular structures – the Celsus Library.

Built in the second century, the two-story library with Corinthian style columns once contained more than 12,000 scrolls. A marker on the steps in front of the library next to the menorah carving carries the following inscription in both Turkish and English: “Menorah, seven-branched candlestick Judaic symbol, incised on the steps of the Celsus Library. Roman Imperial period.”

Interestingly, our guide noted my interest when mentioning the Jewish marker. She asked if I was Jewish. When I responded affirmatively, she told me that she too was Jewish and lived in the nearby Turkish city of Izmir and is a member of one of the synagogues there. 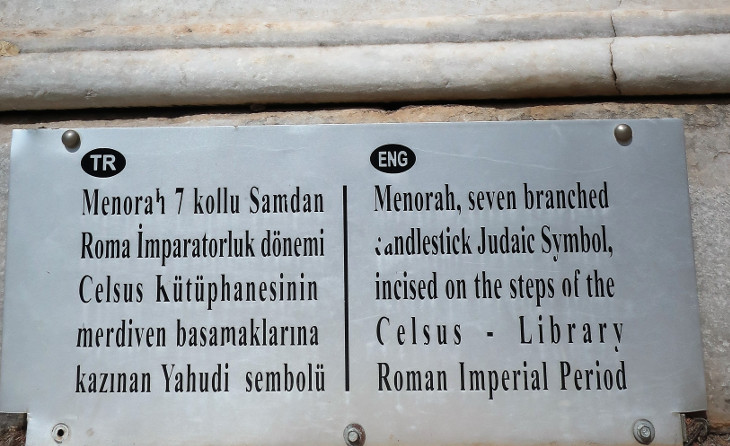 Like a number of other cruise lines, Regent goes out of its way to accommodate Jewish passengers. There were Shabbat services onboard and kosher food was available, if arranged in advance. Regent offers 70 kosher meal options, prepared with certified Glatt kosher meats under strict rabbinical supervision. Each meal is served on kosher china.

Had we had more time, we would have liked to have explored other Jewish sites on the itinerary, including the synagogues in Monaco and Livorno, Italy. But seeing the survival – and even revival – of Jewish life in Barcelona and Rome and the vestige of an ancient Jewish community in Ephesus, certainly whet our appetite to come back and learn more about Jewish life and history in this wondrously beautiful part of the world.

All photos by Dan Fellner

The Best Revenge: Holocaust Survivor Celebrates Birthday with 400 Descendants
Vayelech 5783: Regret and Repent
Rabbi Sacks: Focus On the Important, Not the Urgent
Put Your Foot Down: Are Human Feet Poorly Designed?
Comments
MOST POPULAR IN Israel
Our privacy policy
Aish.com Is Looking for Great Writers