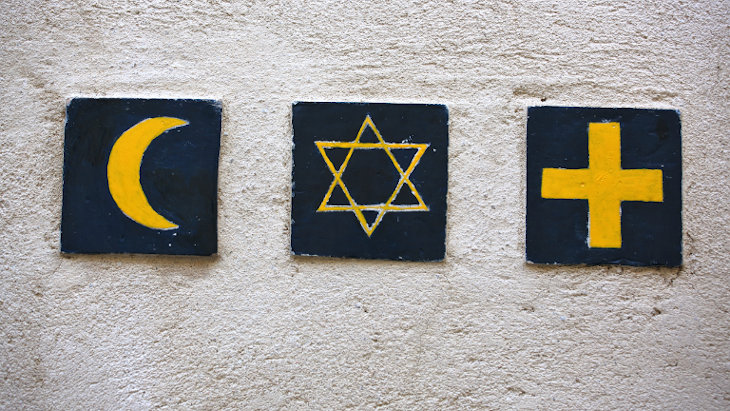 The statistical threat of antisemitism pales in comparison to the damage we are doing to ourselves that is spurring the disappearance of our people.

Several years ago, I was standing with our new assistant rabbi, who had just moved here from South Africa, when a stranger came over and engaged us. In the course of our conversation, the man mentioned something about his non-Jewish wife. When he walked away, I looked over and the new rabbi was visibly shaken. I asked what was wrong and he told me it was the first time he had ever met someone who is intermarried. Coming from a Jewish community in South Africa where even those who aren’t observant are overwhelmingly traditional, he had never personally encountered someone who married out of our faith and it left him startled and shaken.

I, too, was startled that day, but for an altogether different reason. I was startled by how not startled I was. Intermarriage has become so “normal” and “mainstream” in America that we meet or hear about someone married to a non-Jew and we don’t flinch.

Indeed, I thought about this story recently when I saw a headline, “Kamala Harris and Douglas Emhoff made history for interfaith families. All Jews should celebrate that.” Politics aside, many have expressed excitement over Kamala’s step-children calling her “Momala” and how Doug broke a glass at their wedding. Others have kvelled that all of President-Elect Joe Biden’s three children, who are Roman Catholic, married Jews.

According to a 2013 Pew survey, 44% of married Jewish respondents, and 58% of those who have married since 2005, are married to a non-Jewish spouse. The rate of intermarriages among non-Orthodox Jews, who make up the majority of the American Jewish population, was a staggering 71%. This data is seven years old and I shudder to think what the numbers look like today.

Correctly, we are all outraged by and concerned with growing antisemitism. This week, the FBI published its 2019 hate crime report, which found that antisemitic hate crimes rose by 14% last year and once again comprised the overwhelming majority of hate crimes based on religion. (60.2% of all hate crime victims were targeted because they were Jews; next on the list were victims of anti-Islamic bias, who comprised 13.2% of the total.) Last year saw a series of lethal antisemitic attacks in Poway, Jersey City, and Monsey that created understandable concern and worry.

Nevertheless, as disturbing as these horrific incidents and troubling trends are, when it comes to Jewish continuity, the statistical threat of antisemitism pales in comparison to the damage we are doing to ourselves and our contributions to the disappearance of our people.

We should continue to make all Jews feel loved, welcomed, and secure with the knowledge that they always have a place within our people.

In his blueprint for sustainable synagogues, Rabbi Rick Jacobs, president of the Union for Reform Judaism said, “Interfaith families are now the majority of the movement. Audacious hospitality says, ‘You know what? We’re not going to be just nice and let them in. We’re going to say we can’t be who were meant to be without them.’”

Make no mistake, I am not suggesting we make those who choose differently feel rejected, alienated, or marginalized, or believe that they have no place or future in our people. We should continue to make all Jews feel loved, welcomed, and secure with the knowledge that they always have a place within our people. We should not only leave the door open but welcome them to walk through it.

At the same time, we must not provide hospitality by diluting our values, distorting our principles, or worst of all, compromising on our continuity. The rampant assimilation and growing intermarriage won’t be solved by moving the goal posts, offering a new and convenient definition of who is a Jew or what is a Jewish family, any more than an accountant can solve a bad quarter by cooking the books. We must find a way to simultaneously be hospitable to all Jews while inhospitable to some decisions.

We must love all Jews, and we must also love the Almighty, feel His pain, fight for His values and vision and pursue His blueprint for the Jewish people in His world.

Intermarriage is not a Reform or Conservative challenge, it is not the problem of the “unaffiliated” or “secular.” Too many Orthodox parents have reached out to me about their children who have gone through a robust Jewish education and grew up in observant homes who have met someone non-Jewish and are building a life with them. We are one people, one nation, and we are watching our family hemorrhage.

We need to celebrate the joy of being Jewish in our homes and be willing to sacrifice in our dedication and devotion to Judaism.

This is a time for all of us to dig deep, to draw from the wellsprings of our heritage and our timeless Torah. We must bring God back into the conversations in our homes, celebrate the joy of being Jewish, and be willing to sacrifice in our dedication and devotion to Torah lifestyles.

To be clear, there are parents who are excellent role models, who are deeply and profoundly devoted to Jewish life and living and whose children nevertheless make their own choices about life and about religion. There are no guarantees in life. I share these thoughts not to assign blame or promote guilt or cast aspersions on anyone, but to motivate action and inspiration.

Someone once asked me to meet with a man and his son whom I didn’t know. The son was in a serious relationship with a non-Jew and the father was devastated. He was hoping I could meet and “talk some sense” into the son. I will never forget the conversation in my office. The father began by describing how betrayed he feels, how pained he is and what a mistake his son is making.

When he was done, the son turned to his father and said, "Dad, you speak so self-righteously, you claim to care so much about Judaism and Jewish continuity, but what sacrifices are you making for your Judaism? You have a casual attitude towards Jewish law, you pick and choose as you see fit, you are not consistent about praying or study. You aren’t willing to give up the foods you love, the things you want to do, your time or energy and you want me to give up a girl I have fallen in love with who will make a wonderful wife and mother?"

I was floored. The son had made an articulate and compelling case, not in defense of his tragic choice, but rather as an indictment of a father he believed had no right to be surprised or upset.

If we have a casual and selective attitude towards our Judaism, what can we expect from our children and grandchildren. We need to return to the wells that have sustained us and kept us hydrated throughout our history. We must double down on lifestyles of deep commitment to Jewish law, Jewish life, Torah study, character development and lovingkindness. We must work to share our treasured Torah with Jews around us making outreach a priority, not only for outreach professionals but the responsibility of every concerned Jew.

Hearing about intermarriage, whether in the highest office in the land, or anywhere else, is not something to “celebrate” or admire, it is something to grieve, to be pained by, but most of all, to be driven to do something about.

The Heart-Rending Cry
Deep Breaths
What Happened to the Truth?
The Japanese Everything Bagel Spice Recipe
Comments
MOST POPULAR IN Israel
Our privacy policy