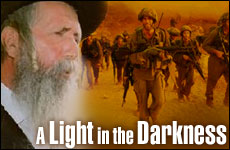 A personal account of an act of kindness bestowed upon 600 weary Israeli soldiers.

A year has passed but First Lieutenant M. has not forgotten the Second Lebanon War or his visit to Migdal Ohr.

"I remember the two weeks of near face-to-face combat, the confused orders and insufficient combat gear, the intense hunger, physical and emotional exhaustion and toughest of all, the self-imposed silence and disassociation with our surroundings. ‘Now is not the right time to complain, but when it is over,' we thought to ourselves, ‘when the air raid sirens stop and we are out of these fatigues, we can talk and the truth will be known.'"

When the news came that we were receiving a day off, our hearts soared. We suffered so much stress and hardship. Where would we go? How should we take full advantage of this gift?

Rumors begin to circulate that we were going to some school in Migdal Ha'Emek. "This must be a joke! Who ordered ten buses to bring us to some yeshiva with some Rabbi who is just going to try and brainwash us?"

Then a few of the guys remembered. "Rabbi Grossman, that's the Disco Rabbi right? The guys all give him great respect." But what do they know? He is still some rabbi.

Tired and emotionally drained, we got off the buses and stood face to face with an old-world looking Jew, complete with a white beard, side locks and long jacket. "So here it comes," I thought, "the push to put on tefillin or to say prayers together. Some day off."

"Boys," the rabbi's words thundered, "I suggest that first thing you do is take a dip in the pool and freshen up. In the meantime, we will make you something to eat."

"What's the problem? 600 soldiers? They should all come, of course we have room!"

In amazing simplicity Rabbi Grossman heard in passing that the brigade was looking for a home for a day, and he immediately volunteered his campus. "What's the problem? 600 soldiers? They should all come, of course we have room!"

With the echoes of war from the battlefield still in our ears, it seemed like a mirage or hallucination. Soft music came from everywhere and flowing water and greenery surrounded us. Within minutes the tables were set with cold refreshing watermelon, cakes, and beverages, followed by cheeses, fresh vegetables, and soft rolls.

Then we heard, "Out of the pool, get dressed and eat something." We saw piles of new undergarments. 600 new undershirts and underwear appeared as if out of nowhere, laid out on tables for our choosing.

Rabbi Grossman sat with us and laughed, "Have a good time boys! Have a great time! This evening, I will put on the most spectacular performance you have ever seen."

I am not a religious person by any means, but I can't help but envision the first Jew, Avraham, standing and personally serving his guests perfectly naturally and without the slightest hint of condescension. He respected each individual and cared for all their needs. Like Avraham, Rabbi Grossman saw in this an obvious act of kindness, a mission of a mitzvah that had fallen into his hands. As the evening continued we learned quickly that this was the essence of who Rabbi Grossman is and what he is all about. He loves everyone and accepts everyone as they are with all his heart and soul.

"Tell me friends," Rabbi Grossman said, "I heard you are lacking different pieces of equipment. Do me a favor. Here is a pencil and paper, just write down everything you are missing and leave the paper on the table."

That night, we enjoyed the entertainment and afterwards, slept in soft beds and air-conditioned rooms. Like in a fairytale, we awoke in the morning and could not believe our eyes. Mounds of gear which we so desperately needed had arrived at Migdal Ohr. Attached was a small note from Rabbi Grossman, "To my dear soldiers, from all my heart!"

A few months before the war began Rabbi Grossman had been offered a new Torah scroll for the main Midgal Ohr study hall by a generous friend of his in France. For some reason Rabbi Grossman requested to postpone the event until an unspecified later date. Rabbi Grossman immediately made arrangements and in an early evening ceremony, we participated in the completion of writing the Torah. While the scroll was carefully laid on the table next to a special pen and ink, Rabbi Grossman addressed the soldiers.

"Each one of you should pray that the merit of the letter he has completed in this Torah scroll will protect him in battle."

"My holy ones! I am going to bestow upon you the merit of a holy mitzvah, which can be considered a once-in-a-lifetime opportunity. Each one of you will complete a letter in the Torah scroll. While you are executing this holy task, each one of you should pray the prayer of his heart and request from God that the merit of the letter he has completed will protect him in battle. Holy sparks will emanate from these sacred letters and disperse around you, creating a protective shield which will keep you safe and bring you home safely."

Those moments were the most exciting and emotional ones of my life. Shaking from the intensity of the immeasurable experience, still not believing, we held the edges of the Torah scroll while we felt our hearts beat rapidly. There was complete silence all around. One after the other, we dipped the quill in the ink and completed a letter in the Torah scroll.

A bystander would have seen a breathtaking scene of incredible elation and spiritual exuberance. The world seemed as if shrouded in silence. The strings of our hearts felt strummed and the tears flowed freely down our cheeks.

After the completion of the Torah, the ceremony continued. Leading the procession was a decorated car with multi-colored lights strung all over it and with a crown of lights spinning around on its roof. Following the car, bearers of a decorated canopy marched while people danced around it. Under the canopy, others held the Torah scroll, which was clothed in white and crimson with a silver crown at its top.

600 soldiers and thousands of the town residents marched and danced in the procession, a loudspeaker accompanying them, playing traditional Jewish music.

As the ceremony came to a close Rabbi Grossman approached every soldier and kissed him while placing a half-shekel coin in his hand and said "Messengers of a mitzvah are not harmed." Rabbi Grossman concluded, "When you return, God willing, healthy and unharmed, you will fulfill this mission I am placing upon you, and you will donate this money to charity."

A moment before they returned to Lebanon Rabbi Grossman told us, "In the merit that you said Shema and put on tefillin, wrote a letter in the Torah, and are messengers of a mitzvah, I promise you, that you will all return safe and sound. None of you will be wounded or killed."

Rabbi Grossman told the soldiers that the first place they must come back to -- before they go home -- is Migdal Ohr. "We will thank God together and from there we will say goodbye," he said. "Think of this as an emergency call-up. Do you accept?" the Rabbi asked and the commanding officer replied in the affirmative.

The night came. Twelve buses made their way atop the Galilee Mountains. Heavy darkness engulfed us, yet behind, in the growing distance, a bright flame pierced the night sky. In the midst of war and violence, we found love and unending human compassion at Migdal Ohr in the welcoming arms of Rabbi Yitzchak Dovid Grossman.

Two weeks later around midnight, Rabbi Grossman received a phone call. "Rabbi, your blessing has come true!" exclaimed the commander over the phone. "Everyone is safe and we are on our way to you. We will be there by two in the morning." Rabbi Grossman immediately contacted the kitchen staff and asked them to prepare a meal while he worked to organize a band.

"I felt as I had never felt before," recalls Rabbi Grossman. "Each one told me his personal miracle."

At 2:30 a.m. the soldiers disembarked from the buses, each one carrying 60 kilo of equipment on his back. The band started playing music and the soldiers approached Rabbi Grossman, each one lovingly received with a hug and a kiss. This continued for two hours. "I felt as I had never felt before," recalls Rabbi Grossman. "Each one told me his personal miracle."

After the warm reception, the soldiers recited a prayer of thanksgiving said by someone whose life has been saved, and together with Rabbi Grossman, they sang and danced until daybreak. "To this day," says Rabbi Grossman, "we maintain contact with each soldier and have become one family."

Rabbi Grossman is a recipient of the "Award of Recognition" for his Actions on Behalf of Soldiers of the Israeli Defense Forces and the Second Lebanon War.

A Tale of Two Heroes

From Lebanon, with Love

Funeral for Baruch
Scientific Curiosity and the Divine Encounter
Mind Over Milkshakes
Love the Convert
Comments
MOST POPULAR IN Israel
Our privacy policy
Aish.com Is Looking for Great Writers