Things People Say at a Shiva 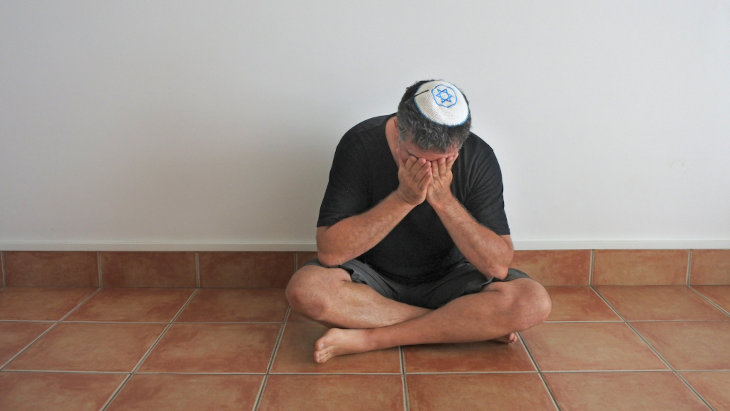 After going through the process of sitting shiva, I’ve taken notes on the things Jewish people like to say.

My father moved into the World of Souls recently, and we miss his physical presence. Though I can’t fathom life without being connected to him physically, his soul lives. This belief is what got me through Shiva. That and the many Jews visiting the home that I grew up in during the Shiva. My father was the Rabbi in Rochester, NY for many years and he was beloved by so many.

My family has always been able to laugh at just about anything. Even things that happen at our Shiva. So here’s my attempt at turning tears into laughter.

“We’re Going to Make Room for Other People”

People were using this line when there was nobody else there. One guy started saying the line, looked around realizing he was alone and said, “Oops. I’m just going to go.”

“I Remember Your Dad”

And that’s it. Added nothing. Sat there, we initiated conversation. He said he remembered our dad. We looked at each other for two minutes and shook our heads. That was it.

“You shouldn’t Know of More Sorrow”

I have no idea what these people were wishing for us before. I don’t want to know.

“We’re Sorry for Your Loss”

We heard this line from people who spent hours a day with our dad for years. But I would’ve rather heard them tell us that they remember our Dad.

I’m still bothered that this was always said by one person. None of these people can own up to their feelings and say, “I’m sorry for your loss.” They always have to include everybody else.

This is where someone flipped the Shiva visit on us. We’re mourning, they come crying and we comfort them.

Our Dad was a community leader and touched many lives. For this reason, we had to comfort many people. Truth is that the cry visit brought me much comfort. It allowed me to say, “Yes, you’re missing my Abba. He was there for your family. Well, maybe you should’ve paid more attention during his sermons. He really would have liked that.”

One person did a cry-through. The most amazing touching move. She started on one end of the house, hugged everybody and went right through the front door. We tried sitting her down to comfort her and say the Hamakom line of being “comforted with the mourners of Zion,” but she went through too quick. Her family dropped her off in the back and was waiting with the car in the front. She planned the getaway perfectly.

“You Should Be Comforted During this Difficult Time”

By difficult time did they mean the Shiva or COVID?

“We are One in Your Pain”

It’s an Israeli thing to tell the mourner that you’re taking their pain. In a way, they steal your pain. It’s the Israeli equivalent of the American cry visit. But are they really one in my pain because where are they going after they stop at my house? Are they going out drinking? Heading on vacation? Going to CVS? Because I am staying at the Shiva.

Some people say, “I’m so heartbroken for your loss.” I like hearing that. I like knowing that other people are also in pain. Tell me you’re in pain. Show up to the Shiva with a broken leg. Limp in and I will feel comforted. I want to hear that you had a terrible sleep last night or maybe even you were having a great sleep but you fell off the bed and broke your leg.

“May his Memory Be for a Blessing. You shouldn’t know more sadness. No more pain. He should be in the bond of eternal life. Blessed is the Judger of Truth. His soul should have an Aliyah/Ascent.”

This is also known as the pile on. This is where they pile on blessings with as many other things they can think of, such as “condolences, sympathies, cherished memories…” Almost as good as the cry-through, this way they don’t have to get involved in conversation. They give you the blessings and they’re out. The good blessing people were so smooth. They were in and out, back shopping at CVS, in five minutes. And they didn’t even have to say, “We’re going to make room for other people.”

“Welcome to the Club”

When a parent dies, you join a club.

This is the worst club ever. The parties are awful. It’s the only club I have ever been part of that nobody wanted to be in. I did not sign up for membership. They just took me in.

“We Should Only See Each Other at Simchas”

That’s a beautiful thought. But the food won’t be as good. You get some really good food at Shiva.

This is why I say it’s better to grow up in a messed-up family, where you all hate each other. It’s much easier.

A sign right near us, in Hebrew, read the traditional Hebrew saying for what you say to a mourner. We were teaching people how to say it in the middle of sitting Shiva; in the middle of mourning, we were bringing people closer to Yiddishkeit. It was as if we were continuing our Abba’s mission. Somebody who hadn’t been to shul in years, was saying, “Here too?!”

After having read everything I wrote above, forget it all. Because the only thing that is important is that people came to visit us. No matter what they said, they comforted us. Their presence and care means everything. We know they love our Abba and we love them. There is nothing more important than knowing they love our Abba and he touched and continues to touch their lives, and that they brought us a lot of food. And after Shiva, I cried and laughed.

Buzz Off
Why My Iranian Mother Didn’t Want Me to Become a Religious Fanatic
The Jewish History of Prague
Why the Sexual Revolution was Bad for Women
Comments
MOST POPULAR IN Jewlarious
Our privacy policy
Aish.com Is Looking for Great Writers