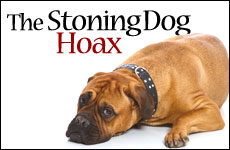 The sad phenomenon of anti-Jewish slurs.

Have you heard the one about the dog in the Jerusalem courtroom? Millions of people have.

According to a host of reputable news outlets, including Time, Agence France Presse and the BBC, a judge in a Jewish court in Jerusalem claimed last week that a stray dog was the reincarnated soul of a secular lawyer he had cursed. This curse-casting judge – according to news outlets – then turned to our 'barbaric' tradition of Jewish law and condemned the unfortunate dog to death by stoning, enlisting local Orthodox Jewish children (who presumably are pretty blood-thirsty) to carry out this “sentence”.

The world’s media reported on this story days after it had been exposed as a hoax.

The story quickly reverberated around the blogosphere. For a time it became the most-read story on the BBC’s website. It was passed around by the thousands on Facebook and Twitter, and generated rabid comment postings. (Here’s a typical one from Time Magazine’s website: “I would rather have the dog live than people like you.”)

Yet the joke was on us.

It turns out that the world’s media reported on this story days after it had been exposed as a hoax.

The story’s genesis was an article in the Israeli newspaper Maariv on June 3, 2011, which apparently based itself on an unsubstantiated rumor posted on an Israeli chatroom. Following this wild allegation, the Jewish religious court in question issued a lengthy explanation of the true events: a dog had indeed wandered into the courtroom, and jurors called 106, the number of Jerusalem’s Municipal Dispatch in charge of stray dogs, which eventually came and removed the dog. The court urged Maariv to confirm their version of events with the Jerusalem city council.

Apparently they did, because on June 15, Maariv printed a correction. (It seems that the story was based on the wild – and untrue - allegations of one court employee, who fabricated the entire tale.)

Unbelievably, however, the world’s media jumped on board after Maariv’s retraction. Ynet, an Israeli news service, posted the uncorrected “story” the next day, along with a statement from a judge denying the story . On June 17, BBC picked up the now-discredited story and put it on its website – reporting it as “fact” – thus giving the story the prestige of a prominent international news outlet. Time Magazine, Agence France Presse and the British Daily Telegraph newspaper posted the stale story on their website the following day.

Even days after the widespread acknowledgement that the story was a hoax, many of these websites offered only oblique acknowledgements of their error. The BBC, for instance, offered that Maariv had retracted their story: as if the retraction had somehow caught the BBC out by surprise, instead of coming days before the BBC’s use of their now-discredited story. (They eventually took the item off their website, as did the other news sites, though the original stories remain easily accessible in an internet search and will probably remain there, poisoning the blogosphere, forever.)

Time and the Daily Telegraph updated their websites to state the article was a hoax: the Daily Telegraph even traced the original story to a Jerusalem court reporter who said he had made a “joke”. While these corrections and retractions are welcome, for millions of readers, the damage has already been done.

One reason this story was too juicy to ignore – even when it should have been obvious to any reporter with an internet connection that it was not true – was that it feeds into a stereotype of Israelis and Jews, especially religious Jews, as being bloodthirsty and strange.

Many of us are used to the lies and slander about Israel.

We live in a world in which the most grotesque allegations are increasingly being made against Israel. Ten years after the 9/11 attacks in the United States, it is received wisdom in many places that “Jews” or “Israelis” were behind the attack. In 2010, a deadly shark attack in Egypt was even blamed on Israel. This came soon after the ludicrous allegations – made by a member of Britain’s House of Lords – that Israel had set up a life-saving field hospital in Haiti in order to harvest the organs of innocent Haitians.

Unfortunately hatred exists within the Jewish nation as well.

Our community should be exposing these vile lies. Yet we often accept even the wildest fabrications with a shrug – particularly when they are about the Orthodox Jewish community. Unfortunately the hatred isn't only between Jews and non-Jews, it exists within our nation as well.

How many Jews read the slander about the dog being stoned to death and thought, Well, maybe that’s how Orthodox Jews behave? How many of us thought to question the bizarre details of the story?

It used to be that Jewish communities were more cohesive. We all lived in similar areas, and even secular Jews often rubbed shoulders with religiously observant Jews. Many people who are middle aged and older even remember their grandparents and great-grandparents who remained observant, even when the younger generations in places like America moved away from Jewish tradition.

For thousands of years, being religiously observant has been seen as a normal, natural, fulfilling way to live one’s life. Being an Orthodox Jew – keeping kosher, celebrating Shabbat, etc. – wasn’t considered weird or scary.

But today, much of that cohesion has broken down, and many non-observant Jews have little contact with their more religious brethren. Without daily contact, it is easier to believe in the slanted stories, in the sensationalist items we read in our newspapers and our in-boxes, in the many slanders of traditional Judaism and Jews.

Particularly when the press insists on reporting the most salacious, most bizarre stories about Jewish communities, it is easy to get a slanted, distorted view.

What can we do?

Most immediately, we can become more discerning consumers of news. If something sounds too outlandish to be true, it often is. Question negative news reports about our community. Check out websites like www.HonestReporting.com and the Anti-Defamation League.

Reach out to a Jew different than you.

We can also educate ourselves about Judaism and Israel. (I realize these are different things, but unfortunately many of the slanders we read about the Jewish state ooze over into slanders about Judaism too: the fiction about the dog being sentenced to stoning is a case in point.)

But most importantly, reach out to a Jew different than you. We are one people, one family, so let's do our part to bridge the gap and connect to family members you have never spoken to. Getting to know different types of Jews will lessen the unfamiliarity, the sense of other, and will likely result in a newfound sense of respect and care.

The smear about the Jewish court sentencing the dog got a lot of people angry. But we can turn our anger – our outrage at being duped by an anti-Semitic press – into action. Let us resolve to start learning more about our own heritage and religion instead.

Perhaps this way we can turn this experience into something positive.

Where Is Our Jewish Leadership Hiding?

The Cool Jews
The Softball Player
How This 6 Generation Bread Baker Brought Back Israel’s Ancient Grains
Olivia Newton John’s Grandfather was a Nobel-Prize Winning Jewish Physicist
Comments
MOST POPULAR IN Israel
Our privacy policy
Aish.com Is Looking for Great Writers