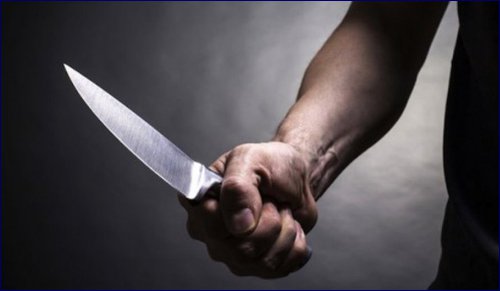 The belief that we can flee and find refuge elsewhere is an illusion.

I, too, was stabbed for being a Jew.

My cowardly attacker came from behind, thrusting a knife deep into my back, just to the left of my right shoulder blade, mere centimeters away from penetrating lung. The second stab, into the muscle of my right tricep, was comparatively benign compared to the first and most devastating wound. I shouted in shock and spun around to see my attacker fleeing down the street.

At first the pain was no greater than a hard punch and, initially, I thought the attack was exactly that, a random punch. Confused as to what had just happened, I threw my left arm over my right shoulder to feel the wound, and was shocked to discover that my finger easily entered the flesh of my back. Upon seeing my hand drenched in blood, I realized what had just happened.

As I learned during my IDF service in the Golani infantry unit, when one is wounded in “merkaz massa,” anywhere in the torso, coughing blood is a sign that the lungs have been punctured and it is only a matter of time until the victim drowns in his own blood.

As I felt around my mouth for any signs of blood I began banging on the window of the closest building yelling for someone to call an ambulance.

What makes my story so noteworthy is not the miraculous nature in which I evaded death or serious injury. What makes my story worth telling is that it happened neither during my IDF service in Lebanon, Gaza, or Hebron nor during the 15-plus years of my life residing in Jerusalem. I was stabbed in New York City. Stabbed by a man, the police would later tell me, who needed to stab a Jew to be accepted into a gang.

As I sit here in my Jerusalem apartment hearing the sirens which have become devastatingly commonplace, I write this article in response to the Facebook posts I am reading from new immigrants who are questioning the wisdom of their decision to move with their families to the middle of an intifada in which many fear leaving the confines of their homes.

We must open our eyes. It can happen anywhere. France, London, Seattle, New York, Australia...

Jews are being attacked everywhere with increasing frequency and ferocity every day. All one must do is scan the news to see the alarmingly dramatic upswing in anti-Semitism around the world.

When a Jew is murdered in the Diaspora, they join the millions senselessly murdered and martyred for their Judaism. But there is something fundamentally different when it happens here in Israel. When we are attacked here it is not merely because of our identity, it is because of our mission. Here we are not tragic victims, but pioneers, working to bring to fruition a 2,000 year old dream of establishing the first Jewish commonwealth in our beloved homeland.

The belief that we can flee and find refuge elsewhere is an illusion.

Man has always resisted coming to terms with the fact that our health, our lives and fate are not in our hands. All that is in our hands is whether the decisions we make are rooted in fear or desire; whether we decide to live ordinary lives or make them extraordinary.

A story told to me by Rabbi Stewart Weiss of Ra’anana, the father of slain soldier Ari Weiss, best illustrates this critical point.

He shared that after his son was killed, a woman knocked on his door, crying. She told Rabbi Weiss: “I was born and raised in Israel, but when my son turned 16, my husband and I decided to leave.

We feared for our boy’s safety.

“If he was destined to die young, he should have died in an IDF uniform, not in a car in California.”

We knew he would soon have to go into the Israeli army – he was already telling us of his insistence on joining a combat unit – and we could not bear the thought of him standing in harm’s way. So we packed up and we dragged him away to California, far from the Middle East war zone.”

The woman lowered her head and sobbed for a few minutes more until she mustered up the strength to speak again.

“When he was 18, still pining away to serve in the IDF with his high-school friends, we bought our son a car. We hoped that this would lift his spirits and make him happy. Three months ago, just after his 21st birthday – the same age as your son – he was killed in a car accident, and I came here to tell you what a fool I was for taking my child away from Israel.

“If he was destined to die young, he should have died in an IDF uniform, not in a car in California. He should have been a hero, like your boy, and not just another statistic.”

The truth is that even with this recent wave of terrorism, we are strong and resolute. For each message of fear and doubt, there are many more expressing strengthened commitment and determination.

We must not allow these vicious attacks to weaken our resolve, not only because that would be granting the terrorists the victory they crave, but because giving into our fears would be to betray the ultimate sacrifice already paid by those who have brought us to this paramount moment in Jewish history; a moment in which each and every one of us merits to be a player on the center stage of Jewish history, advancing the Jewish mission just by waking up in the morning.

Let us heed the words of the biblical Joshua who faced the same insurmountable odds that we do today and exclaimed to the young nation of Israel: “Be strong and courageous, be not afraid or dismayed, for God is with you.”